Visiting the Munich Documentation Centre for the History of National Socialism: A Reflection

This year marks 80 years since the outbreak of World War 2, and during a visit to Munich happened to find markers and plaques across the German city highlighting the rise of the National Socialist German Workers' Party (Nationalsozialistische Deutsche Arbeiterpartei, NSDAP; Nazi Party) , their criminal regime, and the continuing crimes by Nazis following the end of the Second World War. 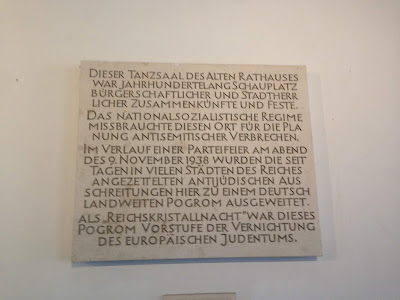 For example outside of the Old City Hall in the historic heart of Munich the above plaque was prominently displayed along with an English translation that read:


FOR CENTURIES THIS BALLROOM IN THE OLD CITY HALL WAS USED FOR MUNICIPAL AND CIVIC GATHERINGS AND FESTIVITIES.

THE NATIONAL SOCIALIST REGIME MISUSED THE VENUE TO PLAN THEIR ANTI-SEMITIC CRIMES.

DURING A NAZI PARTY CELEBRATION ON THE EVENING OF 9TH NOVEMBER 1938 THE ANTI-JEWISH VIOLEENCE BEING INCITED IN MANY CITIES OF THE REICH WAS EXTENDED HERE INTO A NATIONWIDE POGROM.

THE "REICHSKRISTALLNACHT" OR "NIGHT OF BROKEN GLASS" AS IT BECAME KNOWN WAS THE PRELUDE TO THE ANNIHILATION FOR EUROPE'S JEWS.

Walking further came across an ominous marker that indicated that Nazi crimes did not end in 1945. The marker recognized in both German and English that "[t]heir unheeded suffering admonishes us to care. The deeds of right-wing extremists call for vigilance. Munich remembers the victims of the Oktoberfest Bomb Attack on 26 September 1980 and all those affected by it." Through a quick Google search learned that the marker had been placed there on September 4, 2018 and that 13 people had been killed and 219 wounded in the bombing. 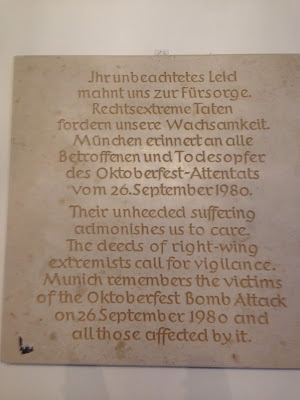 Walking back I happened upon the the Munich Documentation Centre for the History of National Socialism. This museum opened on May 1, 2015 with the objective of "education and remembrance documenting and addressing the crimes of the Nazi dictatorship and their origins, manifestations and consequences right up to the present day."

It is one of those things that is known, but that one does not connect with an area best known for Oktoberfest, and the great culture and civilization of Bavaria. The Nazis first came into power in Munich, and had their main headquarters there.

Spent about four hours going through the different multi-media presentations beginning just after WWI all the way through to the present. It documents the violence, criminality and horror of the NAZI's and their skillful use of propaganda that dehumanized the other, especially Jewish people.

Because it has a Munich focus it addresses the gathering there of Hitler, Italy's Mussolini, Britain's Chamberlain, and France's Daladier in 1938 and the agreement they all signed that met all of the German Fuhrer's demands and sealed the fate of  Czechoslovakia, but did not deter the oncoming war.

However there was no mention of the 1939 Nazi-Soviet Pact that spurred on the war with the division of Poland in secret protocols between Nazi Germany and Soviet Russia or the resistance of housewives in Berlin, who in 1943 went on strike and got their Jewish husbands back with a coordinated non-violent action.


However many acts of resistance in Munich were featured including, The White Rose, a student resistance to the Nazis.  In the picture above three members of the movement are gathered: Hans Scholl, Sophie Scholl and Christoph Probst on July 23, 1942. All three would be executed by the Nazis. Resistance to the Nazis began early.  Conservative journalist Dr.  Carl Albert Fritz Michael Gerlich campaigned against the Nazis early on (see his quote at the top of the page) was taken to the Dachau concentration camp in 1933 and murdered by the the Nazis in 1934.

The case of Johann Georg Elser is also highlighted in the museum. Elser was a 36-year-old carpenter from a small town in southern Germany who came close to assassinating Adolf Hitler on November 8, 1939. The carpenter's objective was to kill Hitler, Goering, and Goebbels. He planted a bomb with a timer where the three men would be while Hitler was making his annual speech at a Munich beer hall. Hitler and his delegation left earlier than planned. The bomb went off 13 minutes after the high-ranking Nazis left and eight were killed and 63 injured.

Nearly five years later on July 20, 1944 the failure of another bomb to kill Hitler brought to an end a high level plot by civilian and military officials. The bomb went off and injured, but did not kill Hitler at the Wolf's Lair, a command post near Rastenburg, East Prussia (present-day Poland). The conspiracy was code named Operation Valkyrie. In the end 7,000 people were arrested, and 4,980 executed for their role in the plot.

However, what remains disturbing is that the man who broke up the conspiracy Otto-Ernst Remer (18 August 1912 – 4 October 1997) would go on to play a big role in post-Nazi Germany. Captured by the United States, he remained a prisoner of war until 1947. Following his release, he obtained funding from the Soviet Union and established the Socialist Reich Party in 1950 that worked with the Communist Party of Germany.  Campaign themes of the Socialist Reich Party included that the Holocaust was an allied propaganda invention, it accused the United States of building fake gas chambers and producing fake news-film footage about concentration camps, that the politics of the Allied-powers created West German state were merely a front for American domination, and that West Germany's puppet status of the United States should be opposed.


The Socialist Reich Party was banned in 1952 and Otto-Ernst Remer fled to Egypt. He served as an advisor to Gamal Abdel Nasser, and worked with other Germans assisting Arab states with the development of their armed forces. He often met with Johannes von Leers. It is worth providing some background on von Leers.

Johannes von Leers had been Waffen SS in Nazi Germany, was also a professor known for his anti-Jewish polemics, and was an important ideologue of the Third Reich, serving as a high-ranking propaganda ministry official. He would offer these services to Nasser at the Egyptian Information Department and serve the Egyptian leader as an advisor. He also provided publishing services in Peron's Argentina. Johannes von Leers converted to Islam, took the name Omar Amin, and died in Egypt at age 63 in 1965.

In the early 1960s Otto-Ernst Remer had contacts with and assisted Fidel Castro in Cuba with the purchase of weapons.

Otto-Ernst Remer returned to West Germany in the 1980s, and set up an organization entitled the "German Freedom Movement" (G.F.M.), which advocated the reunification of East and West Germany, and the removal of NATO military forces from West German soil. The G.F.M. was an umbrella organization for multiple underground Neo-Nazi splinter-groups, and Remer used it to influence a new generation of post-war born Germans. Until the end of his days he continued to engage in Holocaust denial, was an unrepentant Nazi and continued to promote and organize underground Neo-Nazi movements that continue to engage in acts of terror and murder to the present day.

It is also disturbing that Communist Russia allied with Nazi Germany in 1939 to start World War Two, and covertly promoted Nazi elements again in post-war Germany after 1945 in order to undermine West German democracy. Is Vladimir Putin carrying on today where Josef Stalin left off? How much of a role did and does Nazism play in exacerbating anti-Jewish sentiment in the Muslim world?

Visiting the Munich Documentation Centre for the History of National Socialism led me to take a closer look at Nazism past and present and its enablers.

The words of Primo Levi from the The Drowned and the Saved in 1986 should cause us to be ever vigilant: "It happened, therefore it can happen again: this is the core of what we have to say. It can happen, and it can happen everywhere."