Seventy eight years ago on August 23, 1939 Josef Stalin, the leader of the Soviet Union, the first communist regime, signed a treaty with Adolph Hitler, the leader of Nazi Germany it was initially named after their respective foreign ministers, V.M. Molotov and Joachim von Ribbentrop, as the Molotov-Ribbentrop Pact. However it also became known as the Hitler-Stalin Pact. It was publicly described by both parties as a non-aggression treaty but it had a secret additional protocol that divided up Poland and the Baltic states. In reality it was a an aggression treaty in which the two aggressors Nazi Germany and Soviet Russia agreed before hand how to divide up the spoils as follows:


Article I.
In the event of a territorial and political rearrangement in the areas belonging to the Baltic States (Finland, Estonia, Latvia, Lithuania), the northern boundary of Lithuania shall represent the boundary of the spheres of influence of Germany and U.S.S.R. In this connection the interest of Lithuania in the Vilna area is recognized by each party.

Article II.
In the event of a territorial and political rearrangement of the areas belonging to the Polish state, the spheres of influence of Germany and the U.S.S.R. shall be bounded approximately by the line of the rivers Narev, Vistula and San. The question of whether the interests of both parties make desirable the maintenance of an independent Polish States and how such a state should be bounded can only be definitely determined in the course of further political developments. In any event both Governments will resolve this question by means of a friendly agreement.  ... 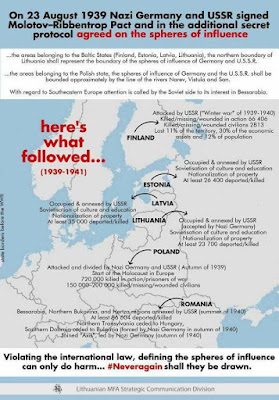 Nine days later on September 1, 1939 at 4:45 am Nazi Germany invaded Poland and World War II started. Sixteen days later the Soviet Union exercising its secret agreement with the Nazis invaded Poland from the East and met their German allies in the middle of Poland and on September 22, 1939 the German Nazi army joined with the Soviet Communist army in a military parade in Brest-Litovsk and the two sides celebrated together.

Each year on August 23rd beginning in 2009 there is a day of remembrance for the victims of Soviet Communism and Nazi Tyranny across Europe, Canada and the United States. The Victims of Communism Memorial Foundation will hold a Black Ribbon Day on Wednesday from 5:00pm to 6:00pm at the Victims of Communism Memorial located at the intersection of New Jersey Avenue NW and Massachusetts Avenue NW, in Washington, DC. If you plan to attend please RSVP.

This is an important moment to hold such a ceremony here in the United States when far too many Americans have openly marched in 2017 with Nazi Swastika flags and Soviet hammer and sickle flags there is a heightened need for acts of remembrance at the horrors unleashed by these twin symbols of hate and how the bloodiest and most brutal war in human history was unleashed on the world when these two evil systems conspired together under a banner of peace and non-aggression that was a lie. Between 1939 and 1945 an estimated 50 to 85 million people were killed in this conflict.  Furthermore the anti-racist credentials of the Workers World Party should be called into question when they support North Korea despite its racist screed against President Obama.

In times of great moral confusion it is important to recall past errors to avoid committing them again in the future. The ongoing debate in the United States of how to confront the menace of violent Neo-Nazism finds far too many Americans looking to AntiFa, a violent fringe group, linked to the Communist Party, to violently counter the white supremacists. The belief is that countering a violent and hateful ideologically motivated movement with another violent and hateful ideologically motivated movement will lead to at least the destruction of one or of both.

In the 1920s and 1930s in Germany groups with the same names and carrying the same flags fought in the streets, with each creating their own heroic narratives, in their decade long violent skirmishes. Fires were set, businesses trashed, and brawls carried out with each side portraying the other as dangerous terrorists, but in reality their radical movements fed off one another while weakening German democratic institutions as mob rule co-opted Weimar Germany, eventually it was taken over by Adolph Hitler and the Nazi Party, consolidating power by blaming the communists for burning down of the German Parliament building on February 27, 1933 with the Enabling Laws.

There were other factors that fueled the rise of Nazism: the Great Depression, the punishing Treaty of Versailles, and the later appeasement of the West but the violent dynamic between the Communist Party and AntiFa against the Nazis in the 1930s helped the rise of Hitler more than impede it.

Nazism and Communism are two ideologies that together have claimed more than 160 million lives and remain a threat to civilization. They should not be underestimated, their histories remembered and condemned. This is why it is so important to observe Black Ribbon Day on August 23rd.