Resisting tyranny and the liberator becoming a tyrant

"He who fights with monsters should look to it that he himself does not become a monster. And if you gaze long into an abyss, the abyss also gazes into you." - Friedrich Wilhelm Nietzsche, Beyond Good and Evil, Aphorism 146 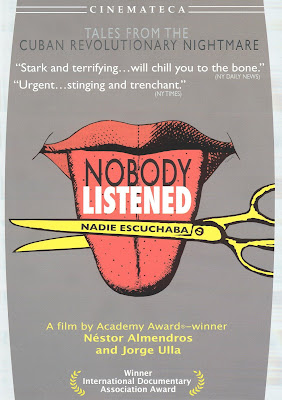 My first encounter with Jorge Valls was in the 1987 documentary Nobody Listened. Janet Maslin of The New York Times in 1988 reviewed this film and highlighted the formerly imprisoned poet:


Jorge Valls, a writer, on the other hand, points out that at least ''free thinking dwelt behind prison walls; it was truly the free territory of Cuba.'' As for public free expression at the time of the revolution, Mr. Valls says: ''None of that in 1959! Just extraordinary exaltation, fanatical idolatry of the victorious warrior, and rampant folly that made everything acceptable.''

Jorge in this documentary on the human rights situation in Cuba in the first three decades of the Castro dictatorship gave a powerful testimony in defense of freedom of expression and human dignity that remains relevant today.

Nobody Listened was the work of two filmmakers with strong ties to Cuba. Jorge Ulla, who was born in Cuba and had also made Guaguasi in 1983 and following the above mentioned documentary made Navidades en familia in 1993.
Nestor Almendros was born in Barcelona, Spain on October 30, 1930 into what would become an anti-Franco family. 18 years later they moved to Cuba. During the years of his stay in the Cuban Republic and the 1952 coup by Batista Almendros travels to study film making in Rome and New York City.

When Fidel Castro takes power in 1959 promising the restoration of democracy, Nestor Almendros returns to Cuba. However when the revolutionary government censors two of his film shorts: Gente en la Playa and La Tumba Francesa, he goes into exile in Paris. While in France he begins to collaborate with filmmakers Erich Rohmer and Francois Truffaut.

Towards the end of his life he directs two documentaries on human rights in Cuba. In 1984 he directs Improper Conduct that explores the discrimination and repression of homosexuals in Cuba under Castro. In 1987 he also directs Nobody Listened that interviews former comrades of Fidel Castro and other anti-Batista revolutionaries who were arrested, tortured and imprisoned after Castro took power in Cuba.
Former Cuban prisoner of conscience Jorge Valls presents a powerful testimony in Nobody Listened.  He also wrote an OpEd published in The New York Times on April 7, 2000 that remains important today for those resisting tyranny.


One day in 1952, there was a coup in my country against the legitimate government, and I thought -- and still believe -- that it was a real catastrophe for Cuba.

I went to fight against the Batista regime. That evening I was put in jail and badly beaten. After seven years of revolutionary struggle, in 1959, that spurious government was substituted amid a civil war by a new one, led by Fidel Castro, which from the very beginning didn't offer any guarantee that the fundamentals of law would be enforced.

Like Mr. Castro, I wanted a radical change in Cuban society, but I also knew that authority would never become legitimate unless the pure power of violence was submitted to reason, and strict respect for individual rights was guaranteed.

Without civil rights, the best intentions turn into a trap, and societies become prisons and asylums. There is a danger that we become as alienated and as fierce as the evil we think we are fighting.

That is what happened in Cuba under the Castro regime. In 1964, I was convicted of "conspiracy against the state," because I testified against the Castro government in a political trial, and I spent 20 years and 40 days in jail. I don't regret my time there, because I was defending this essential respectability of the human person.

Below is the video Nobody Listened that is available on YouTube and in Amazon. It is highly recommended for those who want to know about the real Cuba.