AMIA: 27 years later still no justice for victims of Hezbollah terrorist attack that killed 85 people and the Castro regime's links to this terrorist group

Within the span of a week in July of 1994 two acts of terrorism murdered 122 Hispanics. Thirty seven Cubans were murdered by agents of the Cuban government on July 13, 1994 in what amounted to an act of state terrorism and eighty five Argentinians, many but not all Jewish, in an act of terrorism carried out by Hezbollah  five days later on July 18, 1994.

Relationship between Hezbollah and the Castro regime

Hezbollah, the terrorist group based out of Lebanon, also backed by Iran, was established in 1985, opened an office in Havana in 2011 and since then has dug tunnels from Beirut to within 3 kilometers of Israel’s border to enable the covert movement of forces. The Castro regime has an extensive history of cooperating with and training Middle East terrorists.

Over the past week much has been written about the victims of the "13 de Marzo" massacre but today on the eve of the 27th anniversary of the bombing of the Argentine Israelite Mutual Association  (AMIA ) building in Buenos Aires the fact that justice has still not been achieved requires speaking out.

What happened?
A siren sounded at the precise time the bomb exploded on July 18, 1994 at 9:53am (1253 GMT) and reduced the seven-story Jewish-Argentine Mutual Association (AMIA) community centre in Buenos Aires to rubble reported the BBC.

85 people were murdered ranging in age from 5 years old to 67 years old and more than 300 hundred wounded. 27 years later those responsible for this act of terrorism remain at large. A movement to pay homage to the victims of this crime continues to remember and demand justice twenty seven years later.

The names of the 85 victims:

Over the past twenty seven years much has been written about this crime and on the 27th anniversary interviews, articles and events have and will be carried out to recall that terrible day on July 18, 1994 and the need for truth and justice. Below is a playlist of videos related to the July 18, 1994 AMIA terror attacks.

Please share this with others and join in remembering and demanding justice. 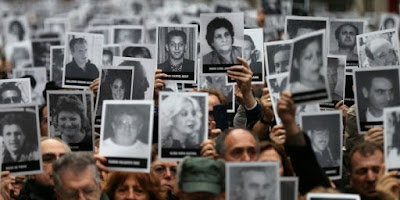