Your statement on Cuba published on Facebook on July 14, 2021 is wrong. In the video above a militarized police are caught on video firing on unarmed Cubans.

First, please do not confuse Cuba, and its people, with the Castro dictatorship. They did not vote the Castros into power, nor did Cubans in 1959 support the imposition of a communist system. Fidel Castro lied about it, and used political terror and firing squads to set up the police state that has endured for 62 years jailing and killing many Cubans, with a disproportionate number being black Cubans.  There are also questions of systemic racism in Cuba with a predominantly elderly, white, and male dictatorship. 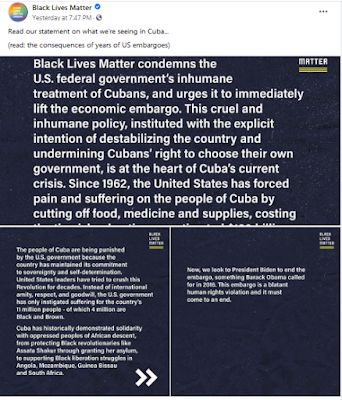 What is causing the troubles in Cuba is the internal blockade that the Castro regime has placed on Cubans and a 62 year old dictatorship. This is why Cubans are protesting against the regime and the Cuban Communist Party.

Cubans are not out in front of the U.S. Embassy protesting the embargo. They're protesting the Castro dictatorship because they know who's responsible for what they're suffering.

It's not an accident. In the spirit of dialogue wish to share the following facts:

Cuba, prior to the arrival of the Castro in 1959, was able to feed itself from its own domestic production. Like both the USSR and Mao's China that ended with the imposition of communist centralized planning applied to agriculture.

Today, 80% of Cuba's food is imported, and much of it from the United States. In the first five months of 2021 the Castro regime purchased $132.7 million in U.S. exports with the top export being chicken and other poultry. Over the past 20 years U.S. agriculture has sold and exported $6,632,400,000 worth of goods to Cuba. This does not include remittances sent by Cuban exiles and Cuban Americans to family in Cuba.

Economic sanctions on the Castro regime target the dictatorship not the people.

Havana does not like to talk about it, but the chicken eaten by Cubans in the island comes from the United States. Please check out the packaging in this Tweet below:

A quick search of the packaging found that Hudson Midwest Foods, Inc. is a subsidiary of the American company Tysons foods. This chicken sold in Cuba is an American export. 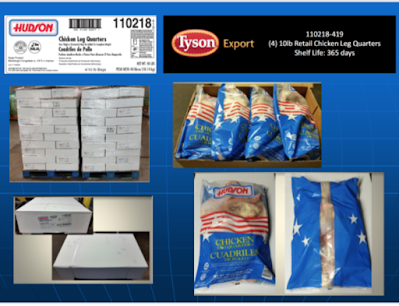 The truth of this is found in the announcement by the Castro dictatorship on July 14, 2021 that "it was temporarily lifting restrictions on the amount of food and medicine travelers could bring into the country." Agence France Press described it as "an apparent small concession to demands by protesters who took to the street last weekend."

This was not the embargo, but the Cuban government placing restrictions on bringing food and medicine into Cuba.

Worse yet, you mention how Cuban doctors being sent overseas but fail to say anything about the shortages of doctors in Cuba, or how the dictatorship profits from the practice in what has been described as human trafficking.

We understand the Castro regime lies and obfuscates, and confusion is understandable, but we are concerned that Black Lives Matter did not call the Castro regime to account when a young unarmed black man was shot in the back and killed by Cuban revolutionary police a few days after George Floyd.

On June 24, 2020 in Guanabacoa, Cuba 27 year old Hansel E. Hernández was shot in the back and killed by the Revolutionary National Police.  He was quickly cremated to avoid an autopsy, and accountability.

On June 28, 2020 independent Jorge Enrique Rodríguez was arrested and charged with "Fake news" for his reporting on this police killing of a black youth.

Demonstrations were announced for June 30, 2020 to protest the killing of Hansel Ernesto Hernández Galiano. Secret police began shutting off internet connections, cell phones and started arresting those who they suspected would take part in protests.

The Castro dictatorship launched a campaign that it called the Heroes of the Blue (#HeroesDeAzul ) that celebrated their police in response.

Your claims about the Castro regime's role in Africa does not past muster. Violent guerilla and terrorist movements sponsored and trained by Castro harmed more than helped across Africa.

Cuban troops in May 1977 took part in a massacre not long after independence following a split in the governing Communist MPLA party. Amnesty International says 30,000 died in the purge others say as many as 90,000 killed.

The Castros took part in a genocide in Ethiopia with their ally and convicted war criminal Mengistu Haile Mariam. Fidel and Raul Castro sent 17,000 Cuban troops to Eastern Africa in order to assist Mengistu in consolidating his rule and eliminating actual and potential opposition. Mengistu was backed by the Castros throughout the 1970s and 1980s. The last Cuban troops did not leave Ethiopia until 1989 and were present and complicit in the war crimes and engineered famine that took place there.

Conservative estimate by Tufts University places number of Ethiopians killed by Mengistu and his Castro allies are between 225,000 and 317,000.

Finally, the credit given by many to Castro for the end of Apartheid in South Africa is problematic. Non-violent movements, general strikes, boycotts, and sanctions had more to do with the end of the Afrikaner dictatorship then the guerilla groups that carried out terrorist attacks with backing from Havana.

The embrace of political violence, terrorism, and guerilla warfare as something positive is a counterproductive approach.