Independence on July 4, 1776: Triumph of American political genius, and a failure of the British Parliament's political imagination and magnanimity

"Magnanimity in politics is not seldom the truest wisdom; and a great empire and little minds go ill together." - Edmund Burke, Speech on Conciliation with America, March 22, 1775

July 4, 1776 is Independence Day, and marks the publication of the Declaration of Independence by thirteen former British colonies against the government in London. It is a day of great celebration in the United States and with good reason. It marks the decision of free peoples to establish a new Republic that has now endured and prospered over 245 years, but for Great Britain it was a magnificent failure that could have been avoided, but Parliament failed to address American concerns and dealt with harshness against their colonists.

Benjamin Franklin, Thomas Jefferson, John Adams and others who would lead the American Revolution drafted and signed the Olive Branch Petition that was adopted on July 8, 1775 and reached London on August 14, 1775 seeking redress on colonial grievances from the British King, and for the colonies to remain within the empire, but it was not to be.

Months earlier the British statesman Edmund Burke spoke out against arbitrary rule over the 13 colonies in his March 22, 1775 speech on conciliation with America in which he explained to the British government that the way to keep the allegiance of the American colonies was to maintain the identification with civil rights associated with colonial rule warning that if that relation were broken it would lead to dissolution.


"Let the colonies always keep the idea of their civil rights associated with your government-they will cling and grapple to you, and no force under heaven will be of power to tear them from their allegiance. But let it be once understood that your government may be one thing and their privileges another, that these two things may exist without any mutual relation - the cement is gone, the cohesion is loosened, and everything hastens to decay and dissolution. As long as you have the wisdom to keep the sovereign authority of this country as the sanctuary of liberty, the sacred temple consecrated to our common faith, wherever the chosen race and sons of England worship freedom, they will turn their faces towards you."

Burke's concept of human dignity as derived from the creator , combined with a concept of man's moral equality, has deep roots in the Christian tradition which is where the language and concept of human rights first emerged in the 1200s in the Catholic Church and was refined by Thomas Aquinas.

Edmund Burke's defense of the marginalized, the colonized, and the conquered was rooted not in abstract enlightenment theory but a Christian moral vision of the universe. According to Burke, in his 1796 Letters on a regicide peace ,man has freedom but it is not absolute:


"As to the right of men to act anywhere according to their pleasure, without any moral tie, no such right exists. Men are never in a state of total independence of each other. It is not the condition of our nature: nor is it conceivable how any man can pursue a considerable course of action without its having some effect upon others; or, of course, without producing some degree of responsibility for his conduct."

Enlightenment liberalism constructed abstract models that failed to take into account the full complexity of human nature and its contradictions. The French human rights charter declares men absolutely both free and equal. Edmund Burke and modern conservatives believe that "full equality" outside of the moral and spiritual sphere is unattainable and a dangerous fiction.

First, to permit absolute freedom is to tolerate profound inequalities because people if left to their own devices develop hierarchies.

Secondly, to enforce absolute equality requires an all powerful state to repress natural inequalities. The end result is not absolute equality but a small group with great power at its disposal making slaves of the majority.

Edmund Burke's counsel in 1775 remains relevant today, as do his warnings of embracing political abstractions to impose government policies, and calling for magnanimity and wisdom in political deliberations. 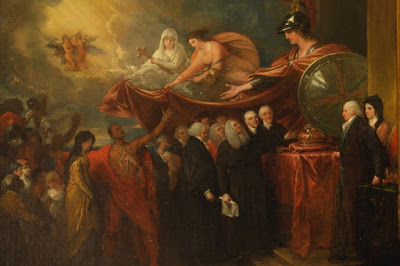