Today paid homage to Oswaldo Payá Sardiñas, and Harold Cepero Escalante, two martyrs for democracy in the Americas killed on July 22, 2012 by Castro's secret police. Had a meeting nearby the Cuban Embassy at 4:00pm, brought a large poster honoring both, and when I emerged from the gathering walked over and for nine minutes picketed in front. Gentleman passed by, and was willing to take a few photographs of this small action. He asked me if I spoke Spanish, and I said yes than asked him where he was from, and he told me "Costa Rica." We smiled and he took several pictures, and handed me back the camera and continued on his way. 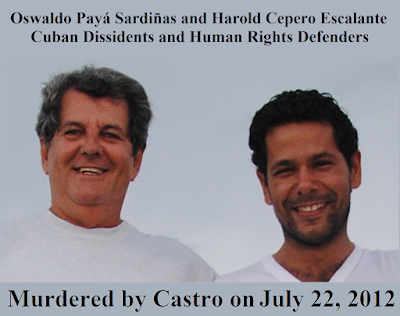 Oswaldo was sixty years old at the time that he was murdered by agents of the Castro regime. He was a family man and lay Catholic from Havana, an engineer, who in September 1988 founded the Christian Liberation Movement with fellow Catholics in the neighborhood of El Cerro, and over the next 23 years would carry out important campaigns to support human rights and a transition to democracy in Cuba.Harold Cepero was 32 years old at the time he was killed together with Oswaldo. He was from the town of Chambas in Ciego de Ávila. At age 18 he began to study at the University of Camaguey, and in 2002 together with other students Harold signed the Varela Project. It was an initiative that was legal within the existing Cuban constitution that had been authored by the Christian Liberation Movement.On May 10, 2002 Oswaldo, along with Regis Iglesias and Tony Diaz Sanchez of the Christian Liberation Movement turned in 11,020 Varela Project petitions, and the news of the petition drive was reported worldwide.
Despite this, Harold and other students were expelled from the university for signing it and sharing it with others. The secret police would organize a mob to “judge”, scream at, insult, threaten and expel the students who had signed the Varela Project. Following his expulsion on November 13, 2002, Harold wrote a letter in which he cautioned that “those who steal the rights of others steal from themselves. Those who remove and crush freedom are the true slaves."Regis Iglesias and Tony Diaz Sanchez were sentenced to long prison sentences in March 2003 following show trials, along with 73 other Cuban dissidents, many of them had taken part in the Varela Project and nearly eight years later were forced into exile as an alternative to completing their prison sentences.
In spite the crackdown, Oswaldo would turn in another 14,384 petition signatures on October 5, 2003. He would spend the next eight years campaigning for the release of his imprisoned compatriots, and continuing campaigns to achieve a democratic transition in Cuba.
Ten years, two months and twelve days after turning in the first Varela Project petitions while traveling in Eastern Cuba on a Sunday afternoon on July 22, 2012 with two international visitors Oswaldo and Harold were killed. Cuban state security bumped into the car they were driving, and when the vehicles stopped, with everyone still alive in the car, approached the driver striking him in the temple with the butt of a pistol. Within hours the lifeless and brutalized bodies of both men would appear.These are somber times with a pandemic raging across the world killing millions, in part, due to the lack of transparency of the Chinese Communist Party.Oswaldo Payá when awarded the Sakharov prize for Freedom of Thought on December 17, 2002 spoke prophetically when he said: “The cause of human rights is a single cause, just as the people of the world are a single people. The talk today is of globalization, but we must state that unless there is global solidarity, not only human rights but also the right to remain human will be jeopardized.”
The failure of the international community to advance human rights along with globalization that is made manifest by the West’s embrace of Communist China, ignoring its continuing dismal human rights record has created a crisis of values that has become a global economic and health crisis.
How did they not see that embracing a regime that killed over 45 million of its own people and building it up economically would not be a disaster? Have the lessons of Nazi Germany so faded from popular imagination that the world needed a reminder?Oswaldo understood that the means are also the ends and in the same talk explained: “We now know that any method or model which purportedly aims to achieve justice, development, and efficiency but takes precedence over the individual or cancels out any of the fundamental rights leads to a form of oppression and to exclusion and is calamitous for the people.”Oswaldo was a consistent human rights defender.On January 12, 2002 the Cuban Communist Party's daily newspaper Granma offered the official position of the dictatorship on the United States opening a prison camp in Guantanamo: "We will not create any obstacles to the development of the [U.S. military] operation, though the transfer of foreign prisoners of war by the U.S. government to the base—located on a space in our territory upon which we have been deprived of any jurisdiction—was not part of the agreement that the base was founded upon."The first Cuban on the island to criticize and denounce the United States for housing Afghan prisoners in Cuba and demanding they be treated with dignity was Cuban opposition leader Oswaldo Payá Sardiñas on December 17, 2002:

"It's obviously a matter of shame that our land is being used for that purpose, having foreign prisoners brought to Cuba. Even if they are terrorists they deserve respect. Their human rights should be respected."

In the midst of darkness, it is important to remember these points of light that give us hope and a path to freedom and improved human rights around the world.Six years ago on July 22, 2015 Javier El-Hage, and Roberto González of the Human Rights Foundation released a 147 page report titled The Case of Oswaldo Payá that concluded.

"Information that emerged in the months that followed and that was not at all considered by the Cuban court that convicted Carromero – consisting of witness statements, physical evidence and expert reports – suggest direct government responsibility in the deaths of Payá and Cepero. Specifically, the evidence deliberately ignored by the Cuban State strongly suggests that the events of July 22, 2012 were not an accident – as was quickly claimed by authorities in the state-owned media monopoly and later rubber – stamped by Cuba’s totalitarian court system – but instead the result of a car crash directly caused by agents of the State, acting (1) with the intent to kill Oswaldo Payá and the passengers in the vehicle he was riding, (2) with the intent to inflict grievous bodily harm to them, or (3) with reckless or depraved indifference to an unjustifiably high risk to the life of the most prominent Cuban activist in the last twenty-five years and the passengers riding with him in the car."

Let there be truth and justice for Oswaldo Payá, Harold Cepero and the many victims of Communism around the world, and let us continue their work in defense of human dignity and in pursuit of the global solidarity that they advocated and lived for.
Oswaldo Payá, Harold Cepero and others living and dead have laid the groundwork that made possible the nonviolent character of the mass nationwide protests that marked a new before and after in Cuban history. However Oswaldo and Harold marked two such historic moments in Cuban history: turning in the Varela Project signatures on May 10, 2002 and their martyrdom on July 22, 2012. 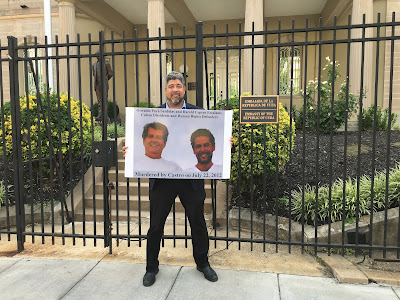