Five lessons from Ukraine for the captive nation of Cuba.

Right now the destiny of our country is being decided. The destiny of our people, whether Ukrainians will be free, whether they will be able to preserve their democracy. -  Volodymyr Oleksandrovych Zelenskyy Address to the US Congress (16 March 2022)

Cubans and Ukrainians suffered under communist regimes. In Cuba today, a Marxist-Leninist dictatorship continues in power. Last year on July 11th, tens of thousands of Cubans took to the streets demanding freedom, and were met with deadly repression across the country. The aftermath? Political show trials, militarized streets, new censorship laws, and hundreds of new political prisoners. Despite this, sporadic protests continue.

It is also important to mention that in three days we will be observing the day 10 years ago when Oswaldo Payá Sardiñas and Harold Cepero Escalante were murdered by the secret police in Cuba. You can learn about Oswaldo in this building at the Museum of the Victims of Communism.

I want to review some lessons from what has happened in Ukraine, and not just over the past few months, but over the longer term.

Lesson #1 Appeasement encourages more aggression
On January 16, 2022, in an OpEd co-authored by myself and Frank Calzon titled " Flashback to 1962, but Vladimir Putin is no Nikita Khrushchev, Joe Biden is no John F. Kennedy," in which we called on the Western world not to wait for an invasion, but to apply tough sanctions to avoid war. We return to an earlier lesson given by Winston Churchill following the Munich Agreement, when Western democracies believed they had achieved peace by giving Hitler parts of Czechoslovakia.
Abandoning Ukraine in the short term may appear to guarantee peace, but the words of Winston Churchill following the 1938 Munich betrayal should give today’s policymakers pause; "You were given the choice between war and dishonour. You chose dishonour, and you will have war. "

Lesson #2 Words must be backed by actions.

"People don't really believe in words. Or rather, people believe in words only for a stretch of time. Then they start to look for action." - Volodymyr Zelensky (2020 on joining the EU).

President Zelensky's observation, made in 2020 with reference to Ukraine's relations with the European Union, applies today with Western promises of support for Kiev following Russia's invasion of Ukraine.

Prior to the 2014 Russian seizure of Crimea, Ukraine did believe in words from the West.

When negotiations between Ukraine and Russia broke down on removing nuclear weapons from Ukraine in September 1993, Washington engaged in a trilateral process with Ukraine and Russia. Yes, Ukraine had nuclear weapons in the 1990s. This resulted in the January 1994 Trilateral Statement. Ukraine agreed to transfer its nuclear warheads to Russia. In exchange, Ukraine received security assurances from the United States, Russia, and the United Kingdom.

The failure of the West to restrain Russia from invading Ukraine in 2014 and expanding the war of conquest in 2022 gives a lesson to captive nations and others that giving up nuclear weapons in exchange for security guarantees is a foolish bargain. Putin's war in Ukraine is a blow against nuclear disarmament.

By 2019, with regards to Russia and the West, President Zelensky observed in a Time interview: " I don’t trust anyone at all."

I know that they [the Russian state] won’t show my address on Russian TV, but Russian people have to see it. They need to know the truth, and the truth is that it is time to stop now, before it is too late. And if the Russian leaders don’t want to sit with us behind the table for the sake of peace, maybe they will sit behind the table with you. Do Russians want the war? I would like to know the answer. But the answer depends only on you, citizens of the Russian Federation.” - President Zelensky, February 23, 2022

Ukraine also provides an important lesson in distinguishing between the Cuban dictatorship and the Cuban people.

Ukraine's deputy foreign minister, Emine Dzheppar, on February 27, 2022,  tweeted: "The MFA of Ukraine in a diplomatic note expresses its strong protest against the statements of the Government of Cuba in support of Russia's aggression against Ukraine and calls on Cuba to urge Russia to put an end to this aggression."

Free Cubans in Cuba, in contrast, were, and are, demonstrating their solidarity with Ukraine, criticizing the Castro regime's support for Putin's actions, leading to arrest by the political police.

Many Cubans rejected (and continue to reject) the war on social media and in messages to the Ukrainian Embassy in Havana. The volume of the calls was so "extraordinary," the Ukrainian embassy in Havana said, that it asked Cubans to send their messages of support to a dedicated email address to clear the phone lines.

Cuban activist Pablo Enrique Delgado Hernández on Saturday, February 26, 2022 went to the Ukrainian Embassy in Havana to demonstrate his solidarity. Pablo Enrique after meeting with a Ukrainian diplomat and presenting her flowers was arrested by the National Revolutionary Police and taken to the Seventh Unit police headquarters and interrogated.

Lesson #4 Importance of disobedience
“Liberation from dictatorships ultimately depends on the people's ability to liberate themselves.”
Gene Sharp, a nonviolent scholar made that observation in his work From Dictatorship to Democracy
Resistance to tyrants, defined by a total refusal to obey them, is key to achieving a democratic transition or the end of a foreign occupation.
This sounds like a simple answer, and this is where I will close with the fifth lesson.

Lesson #5 There are simple answers, but no easy answers.

"There are no easy answers, but there are simple answers. We must have the courage to do what we know is morally right." - Ronald Reagan 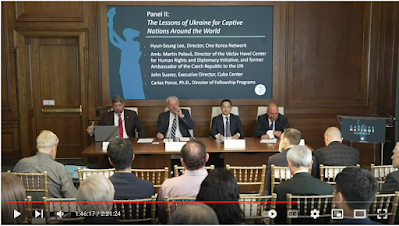