Today, the Castro regime, its fellow travelers and agents of influence will continue the lie that something positive occurred on July 26, 1953.  The only way that they can accomplish this exercise is by rewriting and omitting history. Here is some of what they won't tell you.

July 26, 1953 was a tragic day when Cubans killed Cubans in a failed attempt to overthrow Cuban dictator Fulgencio Batista with an attack on the Moncada Barracks.

In the early morning hours of July 26, 1953 a group of Cubans led by Fidel Castro assaulted the Moncada barracks in Santiago de Cuba. Approximately, 18 government officials were killed and 28 wounded in the attack. 27 rebels were killed and 11 wounded. 51 of the surviving 99 rebels were placed on trial. Fidel Castro turned himself in after seeking guarantees for his safety and was also put on trial.

This attack turned Fidel Castro into a national figure. He would go on to name his movement, the July 26th Movement.

Between 1902 and 1952 with moments of great glory and great shame the Cuban Republic transited through 17 democratically elected presidents. One of them, Gerardo Machado elected in 1925, despite constitutional prohibitions, he had the constitution modified and ran for re-election in 1928. He became a despot, and was removed from office by force in 1933. This led to a return to democracy.

Tragically, this democratic republic was brought to an end on March 10, 1952 by Fulgencio Batista. Batista was a military man who had entered the presidency in free and fair elections in 1940 ( in coalition with the communist party) and left office in 1944. He returned to Cuba under the presidency of Cuba's last democratically elected president, Carlos Prio and within days of the next presidential elections, when Batista saw that he could not win at the ballot box, carried out a successful coup against the democratic order that had existed from 1902 - 1952.

Fidel Castro during his trial on October 16, 1953 addressed the court in what became known as the "“History Will Absolve Me” speech:


“Let me tell you a story: Once upon a time there was a Republic. It had its Constitution, its laws, its freedoms, a President, a Congress and Courts of Law. Everyone could assemble, associate, speak and write with complete freedom." …"Public opinion was respected and heeded and all problems of common interest were freely discussed. There were political parties, radio and television debates and forums of public meetings. The whole nation pulsated with enthusiasm.”

The promise made by the July 26th Movement was to restore the preexisting democratic order along with reforms. The Castro brothers ended a seven year authoritarian dictatorship, and replaced it with a communist dictatorship that has ruled over Cuba for 63 years and counting.

The Castro dictatorship was not a break from Batista but a continuity into more profound tyranny that continues to kill Cubans.

Contrast this with what Oswaldo Payá Sardiñas and the Christian Liberation Movement (MCL) did. In the midst of a totalitarian dictatorship were all media are controlled by the government along with economic life they managed to lead a movement that persuaded more than 35,000 Cubans to identify themselves, demand democratic reforms, and the restoration of human rights knowing that the Varela Project petition they were signing could lead to losing their jobs, having their children denied access to higher education and in the worse case prison.

The images of the movement, unlike the Castro regime's are nonviolent and inclusive and focus on liberation and reconciliation not violence and killing. They do not seek to destroy or slander anyone but to free a people.

Oswaldo and his movement rejected hatred and violence. They never killed anyone and offered a path to a nonviolent democratic transition.

Oswaldo's nonviolent legacy has continued beyond him and is a positive tradition for Cuba. His nonviolent struggle followed two of the basic principles outlined by nonviolence practitioner Michael N. Nagler: "We are not against other people, only what they are doing. Means are ends in the making; nothing good can finally result from violence."

In December 2002, thanks to lobbying and pressure from Spain, Oswaldo Payá was able to travel to Strasbourg, France to receive the European Union's Sakharov Prize and address the chamber where he outlined the movement's position to an international audience.

Sixty nine years after the tragic events of July 26, 1953 the Castro regime celebrates this shedding of blood between Cubans as "the victory of ideas," but in reality it was the triumph of brute violence and terror in the short term by Batista's forces on that day and in 1959 by Castro's forces.

In Cuba the government has turned it into a day of drinking, parties, parades, speeches and the colors red and black prominently displayed.  This all occurs with prominent military displays and propaganda images worshiping violent revolution.

There are two traditions battling for control in Cuba.

One tradition, embodied by the Castro regime, based on violence and the destruction of the other has dominated Cuba's political discourse for half a century. It views dissent as treason and demands unanimity; the only acceptable ideas are the dictatorship's.

The second tradition that built the institutions of Cuban democracy in the 19th Century using nonviolent means, who founded companies with a social conscience such as Bacardi that contributed to the common good until forced out of their homeland, and of the democrats who helped draft the Universal Declaration of Human Rights in 1948 are still there in Cuba's nonviolent civic resistance movement. 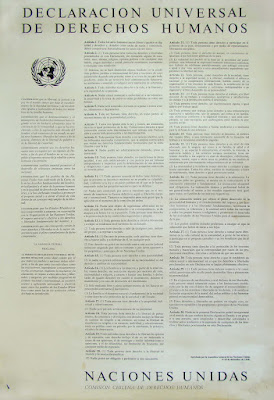 These civic activists were courteous, and respected the dignity of all Cubans. Some were feminists who obtained the right of Cuban women to vote in the old Republic and went on to defend the rights of poor women to a decent education and better opportunities.

They nonviolently resisted the imposition of Castro's totalitarian regime and either went into exile, prison, were killed, or despite great odds are still struggling for Cuban freedom on the streets of Cuba today.

What a post-Castro Cuba will look like can already be intimated.

Castroism will be relegated to a sad and cautionary chapter in Cuban history that it deserves to be.

May 10, 2002 will be a day of celebration in Cuba commemorating the day that the first 11,020 signatures of the Varela Project were presented to the National Assembly demanding human rights and democratic reforms.

July 11, 2021 will also be a day of celebration for the day that tens of thousands of Cubans peacefully gathered across the island demanding freedom and an end to dictatorship.

International Human Rights Day will once again become a day to celebrate and observe human rights in Cuba and not a day of repression. The Cuban Republic's human rights tradition and the role it played in the drafting and passage of the Universal Declaration of Human Rights on December 10, 1948 will be restored and celebrated in Cuba.