#TwelveMonths after the #11J protests in #Cuba: A reflection and call to action

Take the truth as a weapon, placing it in practice in the civic field, what Scripture proposed in the spiritual realm: "the truth shall make you free". Bishop Agustín Román, December 16, 2006

Tens of thousands of Cubans marched in over 50 cities and towns in the island nation beginning on July 11, 2021 and were met with threats, violence, mass arrests, and deadly force that brought these nationwide protests to an end on July 13, 2021, , but sporadic protests continue in Cuba despite the regime's efforts to shut them all down. In one week, a year will have passed.

How did it begin?

A protester from San Antonio de los Baños told BBC Mundo that the initial protest was organized on Saturday[July 10, 2021] through social networks for Sunday [July 11, 2021] at 11:30 AM (local time). Reuters on August 9th reported in more detail on the social network used, and its background confirming the initial reporting by the BBC. On Sunday July 11, 2021 in the late morning hundreds of Cubans took to the streets of San Antonio de los Baños and were soon joined by thousands more.

Thinking that this would be a replay of the August 5, 1994 Maleconazo the Castro regime sent out its repressive forces to quell the protest in San Antonio de los Baños, and President Miguel Diaz-Canel arrived to the protest site to claim that all had returned to normal, but it was too late, the protests had been seen through social media and multiplied across Cuba.

The non-violent protests continued and spread across Cuba with Cubans chanting "the streets belong to the people", "Homeland and Life", "Freedom", "We are not afraid", and "Down with Communism."

Why did it start?

First, protests in Cuba are not a rare phenomenon. Nationwide or mass protests involving thousands and tens of thousands are rare due to the lack of communication, regime surveillance, repression and the right to peaceful assembly is not recognized in Cuba.  Havana on August 5, 1994 had a social explosion with large numbers of protesters and they were met with an extremely violent response from the dictatorship.

Secondly, this time was different. Fidel Castro was dead five years, and Raul Castro, who turned 90 in 2021, is a shadow of his former self.  Sixty two years of communist dictatorship had millions of Cubans desiring change.

There were or other aggravating factors.

The Cuban government's decision not to get foreign vaccines for Cubans in order to claim that Cuba was the first country in the world to vaccinate their entire population with homegrown vaccines caused many deaths.

Officials decided not to acquire vaccines from their allies, China and Russia, or sign up with the United Nation's COVAX program. Russian and Chinese vaccines became available in Latin America as early as December 2020.

Official regime journalist Leticia Martinez Hernandez over Twitter on May 18, 2021 bragged that "Cuba will be the first country in the world to vaccinate their whole population with their own vaccines. Live to see!"

Havana's foreign ministry on June 9, 2021 repeated the same campaign theme: "Cuba could be the first country to immunize its entire population with its own vaccines. The population wants and trusts the vaccine candidates, our science, and the country's experience in vaccine development."

Officials rejected using alternative vaccines over the six months that they were available, because their  first "homegrown vaccines" had not been ready for clinical trials until May 2021 in Havana, and in the rest of the island until June 2021.

Cuban official statistics on COVID-19 infections and deaths are not reliable. Professor Duane Gubler of the Duke-NUS Medical School in Singapore in the January 8, 2019 New Scientist report, "Cuba failed to report thousands of Zika virus cases in 2017", stated matter of factly that "Cuba has a history of not reporting epidemics until they become obvious." Doctors and journalists have been jailed in Cuba for speaking truthfully on past disease outbreaks.

Thousands of Cubans did not live to see the home grown vaccines, and died by the score.

Following July protests in Cuba, officials in August 2021 accepted China's sinopharm vaccine and began providing it to Cubans. This was at least nine months after it had already started to be distributed in the rest of Latin America.

Havana used the pretext of the pandemic to tighten monopoly control over distribution of assistance with zero transparency, and refused to allow farmers markets. Cubans are resentful of this internal blockade placed on them.

In 2020 the Castro regime seized a humanitarian shipment that would have helped tens of thousands of Cubans.They continue to block grassroots efforts today.

The Biden Administration in early July 2021 granted a temporary authorization from the US Department of Transportation for two cargo airlines to travel to the island with humanitarian cargo. According to 14ymedio the "permit, which will be in force until November 30 and was made public on August 13, includes charter flights 'for emergency medical purposes, search and rescue, and other trips considered of interest to the United States.'” Two months had passed and there was still no response from Havana, despite the urgent need on the ground.

The Castro regime seized and collectivized properties, and prohibited farmers selling their crops to non-state entities, in the early years of the revolution. The Cuban government established production quotas and farmers were (and are) obligated to sell to the state collection agency, called Acopio. Most recent law on agriculture in Cuba ( Decreto Ley 358 de 2018) continues to prohibit private sales of agricultural products to non-state entities. 50% of crops rot waiting on Acopios to collect them. During prior crises in the 1980s and 1990s officials had allowed farmers markets, temporarily to emerge and sell their produce directly to Cubans to alleviate hardship then shut them down after the crisis. This practice was not permitted during the Covid-19 pandemic.

Between 70% and 80% of Cuba's food is imported. Since 2000, much of the food purchased by Havana has been imported from the United States, but the only legal importer is the Cuban government that price gouges Cubans with 400% and higher price markups.

On July 14, 2021 the Cuban Prime Minister Manuel Marrero appeared on television and announced that the dictatorship would "temporarily lift restrictions on the quantity of food and medicine incoming travelers could bring into Cuba."

How did the 11J protests end?

President Miguel Diaz-Canel, in a public address on July 11, 2021 threatened:

"They [protesters] would have to pass over our dead bodies if they want to confront the revolution, and we are willing to resort to anything."

What did Cuba's top official mean by this? Diaz-Canel did not mince words:

"We are calling on all the revolutionaries of the country, all the communists, to take to the streets and go to the places where these provocations are going to take place today from now on, and in all these days and face it decisively, firmly, with courage."

The Castro regime's president concluded declaring, "the order of combat is given, revolutionaries take to the streets."

Havana officially recognized one Cuban killed on July 12th during the continuing protests, Diubis Laurencio Tejeda, (age 36). He was shot in the back by regime officials on day two of nationwide protests in Cuba. Reports have been received that family members of those killed have been threatened to remain silent.

Christian Díaz, age 24, disappeared after joining the 11J protests. Relatives on July 12, 2021 reported him missing to the PNR in Cárdenas. Police told his father that Christian was jailed in Matanzas. On August 5, 2021 officials informed his family he’d drowned in the sea and was buried in a mass grave. His family is convinced he was beaten to death.

Cuban protesters were met with extreme violence by the dictatorship, but continued to take to the streets over three days before the extreme repression, and militarization of all Cuba shut them down.

On Saturday, July 17 the regime held their official rally, and even there they could not obtain unanimity and violently dragged out an unknown protester who screamed "Freedom."

On January 13, 2022, France24 reported on the plight of Dayron Martín Rodríguez (age 36) who was sentenced to 30 years in prison. He was "detained in La Güinera. Dayron went out "to buy food for his pigeons when he ran into the rally," said his mother, Esmeralda Rodríguez (age 63), who added that "he started recording to send his father the video." He felt the stones hitting him, he fell and lost his phone. Video emerged during the 11J protests of police throwing rocks and firing on unarmed protesters. Esmeralda Rodríguez, "suffered a pre-infarction when she found out in Ecuador, where she emigrated. eight years ago" that her son had been sentenced to 30 years in prison.

Regime officials are doing everything possible to terrorize Cubans into silence with long and unjust prison sentences, and a continued militarized presence on Cuba's streets. It is important to note that the worse punishments were meted out not to protesters, but to those who recorded the protests, and shared it over social media.

Following the 11J protests on August 18, 2021 Havana brought Decree-Law 35 into force. Human Rights Watch reported that "the decree, which has the stated purpose of 'defending' the Cuban revolution, requires telecommunications providers to interrupt, suspend, or terminate their services when a user publishes information that is 'fake' or affects 'public morality' and the 'respect of public order.'

On May 15, 2022 the Cuban dictatorship issued a new penal code that punishes with "penalties of 10 to 30 years – in extreme cases even death" for "those who give information to international organizations, associations or even people who have not been authorized by the government." Insulting or attacking officials or civilians doing their “citizens’ duty” can jail you for up to five years. Five years in prison if you “incite” against the socialist order,  and 10 years if you use communications media to do it.

The political show trials continue in Cuba, and so does the repression combined with the uncertainties around the new repressive laws, and penal code.

On the evening of July 11, 2021  I was outside of the Cuban Embassy in Washington DC with others protesting the repression of the dictatorship, and in solidarity with Cubans on the island demanding freedom, but we had long planned the protest to remember the victims of the July 13, 1994 "13 de marzo" tugboat sinking and the martyrdom on July 22, 2012 of Oswaldo Payá Sardiñas, and Harold Cepero Escalante by the secret police.

Last year, we were at the Cuban Embassy protesting repression, remembering victims, and martyrs. We will be there again on July 11 at 7:00pm. 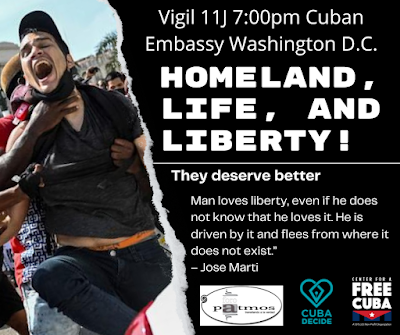