Remembering Celia Cruz 19 years after her passing, and setting the record straight on the Smithsonian's omissions about her life

Edited version taken from Center for a Free Cuba's CubaBrief.

Úrsula Hilaria Celia de la Caridad Cruz Alfonso, better known as Celia Cruz, died 19 years ago on July 16, 2003, she was 77 years old, and across the world millions mourned her passing. Waves of grief were especially felt in Miami, Florida and Hoboken, New Jersey, both containing large Cuban exile communities.
I too mourned her passing, and grieved that she had never been able to return to her homeland because of a cruel and despotic dictatorship.
Although she was a resident of New Jersey Celia spent a lot of time in Miami, and I had seen her around town over the years, and when I graduated from FIU in 1992 she was awarded an honorary degree along with President George H.W. Bush.
Will never forget President Bush's look of surprise when she grabbed him in a bear hug  or how the crowd of students went wild when she shouted "Azucar" in the midst of the graduation ceremony. She had also received honorary degrees from Yale and the University of Miami.
Mourning for Celia was nearly universal, except in her homeland Cuba where official media printed a small note on her passing recognizing Celia as an “important Cuban performer who popularized our country’s music in the United States,” it went on to say that “during the last four decades, she was systematically active in campaigns against the Cuban revolution generated in the United States.”
Sadly, the reason for the Castro regime's hostility towards Celia Cruz, her refusal to bow to Fidel Castro, her legacy defending freedom of expression, and the high price she paid is absent from a March 5, 2020 video by the Smithsonian Institution titled "Why Is Celia Cruz Called the Queen of Salsa? #BecauseOfHerStory." 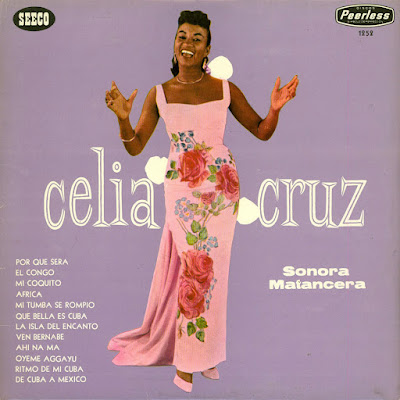 Ariana A. Curtis, curator at the Smithsonian’s National Museum of African American History and Culture is interviewed by a student identified as Mincy that omits key parts of Celia's history conflating her with the immigration experience in America, when she was a Cuban Exile barred by the Castro dictatorship from returning to her homeland, and her music banned to the present day in Cuba. This is the portion of the interview that describes her departure from Cuba:

"Ariana A. Curtis: Because especially during the early 1960s when she left, that was right after the Cuban Revolution, you know. And so, Cuba was in the news a lot about politics, and about socialism, and about military things. But she really wanted to be able to show this "other side" of Cuba, right. The arts and culture side. And so, she definitely used her style, sort of like satin dresses with the ruffles, and like these long trains.
Mincy: People migrate here and they tend to change their names and change who they are so that they can get jobs or so that they can get opportunities. So, they hide that part of themselves in order to like grow in this country, it's so important that we have an example that Celia Cruz did not hide herself."

This omits much of Celia's history, and does something that the Queen of Salsa never did, and that is hide who she really was. And this process did not begin with this interview, but stretches back several years.

Fidel Castro had tried to create a situation that forced the salsa singer to pay him homage, but Celia refused. Salserísimo Perú, a site created in Peru by three journalists to share information on salsa and tropical music offers a more complete and accurate history than the Smithsonian Institution. Below is an excerpt of Celia Cruz's first "encounter" with Fidel Castro.

"In the early months of 1959, Celia Cruz was hired to sing with a pianist at the house of the Cuban businessman Miguel Angel Quevedo.  Quevedo owned the magazine Bohemia, the most influential in Cuba and who had supported the revolution in the last few years.  The guerrilla movement with a certain Fidel Castro in front proclaimed in Santiago the beginning of the revolution. For the Guarechera, Fidel was ending free expression and the arts in her country.  The night of the show in the home of Quevedo, Celia was singing standing next to the pianist, when suddenly the guests started to run to the front door of the house. Fidel Castro had arrived.  Neither she nor the pianist moved and continued singing. Suddenly, Quevedo approached Celia and told her that Fidel wanted to meet her because in his guerrilla days, when he cleaned his rifle, he was listening to Burundanga. Celia replied that she had been hired to sing next to the piano, and that was her place. If Fidel wanted to meet her, he would have to come to her.  But the commandant did not do that."

Since Celia Cruz refused to bow to the new dictator, and wanted to continue to live the life of a free artist, she had to flee Cuba. However, when her mom was ill, she tried to return to see her in 1962, but was barred from entering the island by Castro. When her mother died Celia was again blocked from attending the funeral. Because she was not an active supporter of the regime, her music was banned in Cuba.


According to the 2004 book, Shoot the singer!: music censorship today edited by Marie Korpe there is increasing concern that post-revolution generations in Cuba that are growing up without knowing or hearing these censored Cuban musicians could lead to a loss of Cuban identity in these and future generations.
This has been described as a Cuban cultural genocide depriving Cubans their heritage.
Posted by John Suarez at 5:31 PM