Free Chinese and free Cubans share a common day to mourn their victims of communism. 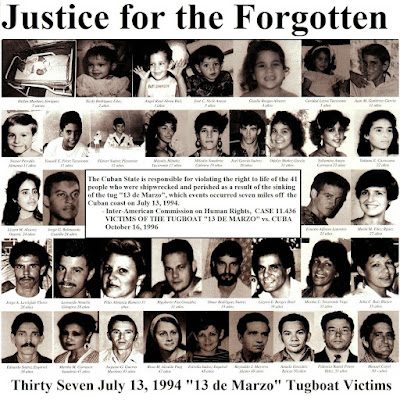 Over the past 28 years Cubans have mourned the 37 men, women, and children who were extrajudicially executed by Cuban government agents on July 13, 1994 when the "13 de Marzo" tugboat was attacked and sunk.

Tragically, Chinese are mourning Chinese Nobel Peace Prize Laureate and human rights defender Liu Xiaobo who died five years ago on July 13, 2017 at the First Hospital of China Medical University, in Shenyang, China after being unjustly imprisoned from December 8, 2008 until his untimely death nearly 10 years later.

It is likely that he died of a cancer made terminal by politically motivated neglect. Today marks five years since his passing. After eight years in "unofficial detention" his widow Liu Xia was finally allowed to leave China on July 10, 2018. 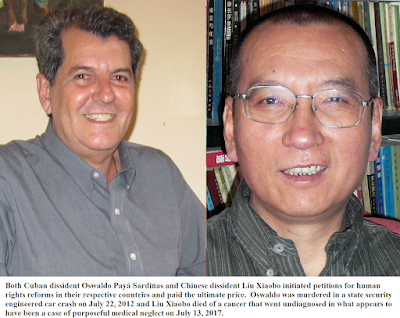 Charter 08 is reminiscent of the Varela Project that was initially signed by 11,020 Cubans in May of 2002 calling on the Cuban government to respect international human rights norms and engage in the same kind of reforms. Both were inspired by Vaclav Havel and Charter 77. Lamentably, the author of the Varela Project, Oswaldo Payá Sardiñas, founding leader of the Christian Liberation Movement and a youth leader of the same movement, Harold Cepero Escalante were both extrajudicially executed ten years ago on July 22, 2012 in a crash engineered by the Cuban dictatorship's agents.

We bear witness embracing truth and memory in defiance of the attempt to whitewash and forget. Holocaust survivor Elie Wiesel explained the importance of doing this in his 1986 Nobel Lecture on why it is important to remember:

In 2017, I was present at a candlelight vigil in Washington, DC on July 17th organized by the Victims of Communism Memorial Foundation to pay my respects for Liu Xiaobo and demonstrate my solidarity with Chinese human rights defenders. 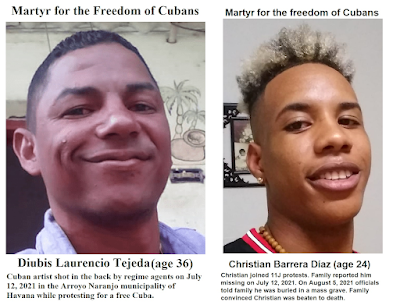 On Monday, July 11, 2022 I was in front of the Cuban embassy in a vigil in solidarity with Cubans jailed for taking to the streets in over 50 towns and cities across Cuba, in remembrance of Diubis Laurencio Tejeda, and Christian Barrera Díaz during the 11J protests, for the 37 victims of the July 13, 1994 "13 de Marzo" tugboat massacre and in remembrance of Oswaldo Payá Sardiñas and Harold Cepero Escalante both killed by the secret police on July 22, 2012. Together with scores of others we lit candles and said prayers for these victims of communism, their loved ones, and for justice.

We continue to remember, and demand justice.