Placing the Cuban Revolution of 1933 in context: How the Sergeants Revolt marked a before and after in Cuban history

Prologue to the 1933 Revolution

How the Cuban Republic obtained independence through protracted diplomatic efforts.

Cubans through political intrigue managed to avoid the fate of Puerto Rico and the Philippines during the Spanish-Cuban-American War. The United States military had occupied Cuba from 1898 to 1902, and the bitter price of independence was accepting the Platt Amendment, which permitted U.S. interference in Cuban internal affairs to preserve order and protect American interests, put into question the status of Cuba's Isle of Pines as a possible U.S. possession. 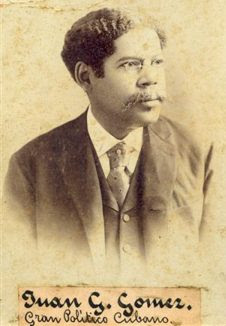 Cuba's first elections were held in June 1900 under the U.S. occupation for local officials, and pro-U.S. candidates did not fare well losing to nationalist candidates, and the pattern was repeated again in August 1900 to elect candidates to the constitutional convention.
The majority elected were war veterans, Mambises, who fiercely opposed the U.S. occupation, and Juan Gualberto Gómez, a black intellectual, he had been a close ally of José  Martí in the war of independence, who spent the rest of his life opposing the Platt Amendment, and advocating for racial equality representing his constituency in Havana.
In 1892 the black Cuban journalist and future statesman founded the Central Directory of Societies of Color, a network that would spend the next sixty seven years pushing for Black advancement in Cuba.

The Cuban Republic formally came into existence on May 20, 1902 and it began to achieve concrete results. American speculators had bought up land on what was then called the Isle of Pines, and renamed the Isle of Youth during the Castro regime, following the U.S. occupation of Cuba and the island had been settled by American settlers, and its status as a U.S. territory a political question, according to American courts.

Cubans successfully negotiated the maintenance of the Isle of Pines as part of Cuba on July 2, 1903 in the Hay-Quesada Treaty that was negotiated between U.S. Secretary of State John Hay and Gonzalo de Quesada, the Cuban Ambassador to the United States, and the treaty was finally ratified on March 13, 1925 following years of pressure from economic and political interests wishing otherwise.

The United States had wanted to build four military bases in Cuba, but the Cuban government successfully negotiated this down to two in 1903, those being Guantanamo and Bahia Honda.  Bahia was given back to Cuba in 1912 for more land for the Guantanamo military base. By 1912 there was only one U.S. military base operating in the island.

Gerardo Machado, a brigadier general in the war of independence and later a businessman was elected president of Cuba in 1924 but seized power over all political parties in 1927 and became Cuba's first dictator.

Cosme de la Torriente y Peraza, Cuban statesman and President of the League of Nations in the 1920s, wrote in an October 1940 essay titled "Cuba, America, and the War":

In 1925 General Machado succeeded Dr. Zayas as President. In spite of his promise not to stand for reelection, Machado sought to have the Constitution of 1901 modified so that he could maintain himself in power. As a result, a widespread state of public disorder became almost permanent. It was under these circumstances that Machado was reelected without opposition in 1928.

On January 19, 1928 President Calvin Coolidge and the First Lady visited Cuba and met with General Gerardo Machado who at the time was transforming his rule into Cuba's first dictatorship.
The aftermath of the Coolidge visit saw Cuba deeply entrenched in its first dictatorship, rising political violence under Machado's dictatorial rule.
Alvaro Vargas Llosa in a 2008 book review published in The Wall Street Journal titled "The Family Spirit" described Bacardi's clash with the new Cuban authoritarian leader.

"José Bosch, called Pepín, a young businessman who also married into the Bacardi family and was an early opponent of Gerardo Machado's corrupt rule in the 1920s. Machado made Bacardi, one of Cuba's most successful companies, a target of predatory taxation, but a proposed rum tax was more than the distiller could stand. Bacardi opened new facilities in Mexico and threatened to move its operations there if the tax was enacted."

Cuban Revolution of 1933: The Sergeants Revolt

On September 12, 1933 The Madera Tribune carried an editorial titled "America Will Never Consent to Removal Of Platt Amendment."  Cuba was in the midst of a crisis caused by President Gerardo Machado. He was democratically elected, but had made changes the constitution to break a campaign promise, run for re-election and perpetuate his presidency for a second term. Together with the arrival of the Great Depression in 1929, a period of political and economic crisis led to the end of Machado's presidency in a revolutionary environment in 1933.

At a critical moment in the struggle against Machado when populists and students called for a general strike, it was the communists who broke the strike and sought an accommodation with the Cuban tyrant. It made the communist party extremely unpopular in Cuba.

Nevertheless, Machado was driven from office and into exile in 1933 by a successful general strike. Cosme de la Torriente y Peraza, in the already mentioned 1940 essay "Cuba, America, and the War" described what happened next:

"Shortly after assuming office in 1933, President Roosevelt authorized his new Ambassador to Cuba, Mr. Sumner Welles, to act as mediator between Machado and the majority of his opponents. The proposal was accepted and the basis for an agreement was reached which would have ended the conflict between government and governed in Cuba, if General Machado had given effect to his offer to resign. Instead, influenced by the evil advice of some of his friends and by his own intemperance, he carried out acts of such violence that on August 11, 1933, the Cuban Army declared against his authority, thus obliging him to renounce his office and leave the country the very next day."

Carlos Manuel de Céspedes y Quesada, a Cuban diplomat and opponent of Machado, was offered the position of President when Machado fled. He took office on August 13, 1933.

"I am rapidly coming to the conclusion that my original hope that the present Government of Cuba (Céspedes' administration) could govern as a constitutional government for the remainder of the term for which General Machado had himself elected must be abandoned. If the solid and unwavering support of the Army could be counted on, and if the groups and parties represented in the present Government were unanimous in their support of the administration, it might be possible for the existing Government to maintain itself, pass the necessary legislation of all kinds required, and hold the general national elections in November 1934 as originally anticipated. As a matter of fact, however, a general process of disintegration is going on. The Army is by no means in a satisfactory condition and the relapse in the health of General Sanguily, Chief of Staff and the one ranking officer in the Cuban Army who can command the support of his subordinates, has delayed the taking of the measures necessary to enforce discipline within the Army which he alone could have undertaken satisfactorily."

This was followed by a revolution led by Sergeant Fulgencio Batista with other enlisted men and university students in what became known as the Sergeants Revolt on September 4, 1933.

On September 4, 1933, Fulgencio Batista seized the moment and organized his troops in the military ranks and gave them instructions.

"From this moment forward, do not obey anyone's orders but mine. First sergeants must immediately take control of their respective military units. If there is no first sergeant, or if he refuses to take command, the senior sergeant must do so. If there is no sergeant, a corporal. If there is no willing corporal, then a soldier, and if not, then a recruit. The units must have someone in command and he must be an enlisted man."

Four hundred military officers opposed to Batista regrouped at the Hotel Nacional, but Batista with his enlisted men crushed the officers at what became known as the Battle of Hotel Nacional, and the revolutionary forces consolidated control.

Carlos Manuel de Céspedes y Quesada had been outside of Havana to examine damage done by a hurricane, and returned to the Capitol city to learn that he was no longer the President of Cuba, and accepted the outcome of the coup. He would go on to continue his long and distinguished career as a Cuban diplomat until his death six years later in 1939 from a heart attack.

On September 5, 1933 both Fulgencio Batista and Ramon Grau San Martin visited Ambassador Sumner Welles to determine the position of the United States with regards to the events unfolding. The revolutionaries initially created a governing pentarchy, but that gave way to Ramon Grau San Martin as president for a hundred days, followed by Batista becoming a behind the scenes strong man.

On September 10, 1933 Ramón Grau San Martín,  assumed the presidency of Cuba, but due to his opposition to the Platt Amendment, refused to take the oath of office before the Supreme Court or to the Cuban Constitution of 1901 but pledged his fidelity to the Cuban people. His government lasted for 127 days, but the Platt Amendment was abrogated on May 29, 1934 when the United States and Cuba signed a new treaty of relations that canceled the treaties that enforced the Platt Amendment.

This revolutionary process put Fulgencio Batista into the national spotlight and by 1934, pushing Grau San Martin out of power, he became the strong man behind the scenes even though democratic formalities were restored.

In 1940 all the political tendencies in Cuba met to draft what became known as the 1940 Constitution.

There was no Platt Amendment in the 1940 Constitution.

A presidential election was held and Fulgencio Batista elected. He served out his term as president from 1940 to 1944. Due to a clause in the new Constitution he was unable to run for re-election.

Cuba's republic during this democratic period played an important role in the drafting of the Universal Declaration of Human Rights of the United Nations.