From Nobody to Everybody Listening 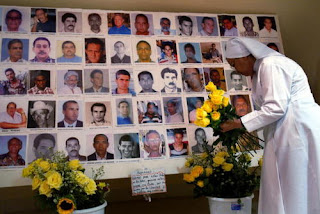 From Nobody to Everybody Listening

Cuba's political prisons and the importance of International Solidarity

History has demonstrated that one cannot remain silent in the face of such injustices without catastrophic results. Tens of thousands of Cubans have suffered inside of Castro's prisons for political reasons. For the past half century 's freethinkers have been free to think, and talk without fear of imprisonment only in these brutal prisons. The preceding idea was first outlined by Jorge Valls over twenty years ago in a documentary on ’s political prisons: Nobody Listened.

Jorge Valls a poet and writer served 20 years and 40 days of an unjust prison sentence for speaking out in defense of a friend undergoing a Stalinist show trial. Jorge was recognized as a prisoner of conscience by Amnesty International. He has written both a chronicle of his imprisonment 20 years and 40 days and a book of poems Where I am there is not light and it is barred. His description of his years in prison involves the sounds of firing squads in , brutal beatings, hunger strikes and death as a constant companion.

One need not be a political or human rights activist to suffer dire consequences when you express what you think. Earlier this year Juan Carlos González Marcos, known better as “Pánfilo,” appeared on camera saying that he was hungry and that there was hunger in . Yoani Sanchez, a Cuban blogger, pointed out that he was obviously drunk because otherwise no sane person would ever speak the truth in unless he was a member of the opposition and willing to go to prison or worse. Sure enough Pánfilo he was arrested; charged with “predilection to social dangerousness” for his outburst. This charge has been used to incarcerate large numbers of Cubans over the decades.

Another case is that of Maikel Bencomo Rojas detained on May 7, 2008 brutally beaten by State Security agents and in a summary trial sentenced two years in prison for having a tattoo on his back that says “Abajo Fidel” [Down with Fidel]. 26 years old married with a small daughter he was not part of any organized opposition but merely wanted to express himself.

However, out of these prisons there has been a rebirth of spirit and hope amid all the misery and torture. The Cuban Committee for Human Rights and much of the democratic opposition were forged in prison and tempered by its brutality to confront a totalitarian system. A musician like Gorki Aguila of the Cuban punk rock band imprisoned because of lyrics critical of the dictatorship in a sham trial would meet Dr. Oscar Elias Biscet and emerge years later from prison fearless and challenging the dictatorship with scathing lyrics with no room for misinterpretation.

A medical doctor Oscar Elias Biscet in the mid 1990s began to follow the path of Mohandas Gandhi and Martin Luther King Jr. Beginning in 1999 Dr. Biscet first served a three year sentence for holding a press conference and defending human rights. Less than a month after his release in 2002 he was rearrested for organizing teach-ins on how Cubans could nonviolently exercise their rights and sentenced in March of 2003 to 25 years in prison along with scored of other non-violent civic activists and independent journalists. Earlier this year on the eve of his 48th birthday he managed to get the following message to his wife Elsa Morejon: “When you ask me how I am doing, and I tell you that I am resisting, it is because the environment I find myself in is too brutal for any civilized man imprisoned for promoting ideas of love, the respect for human rights and the defense of life. Yet, I thank God as I awake every day, for in this dark and lonely cell, I know He is with me.”

In 1969 in a letter to Alexander Dubček Václav Havel enunciated a profound truth: “Even a purely moral act that has no hope of any immediate and visible political effect can gradually and indirectly, over time, gain in political significance.” Following the March 2003 crackdown in President Havel led a movement of international outrage over the imprisonment of human rights and pro-democracy activists. Along with President Aznar of the European Union was able to denounce the human rights situation in the island and recognize the democratic opposition. Thanks to these efforts some of the 75 have had their sentences commuted to house arrest or forced exile.

Moral acts by average citizens have had unforeseen effects such as when the musician Gorki Aguila was rearrested and threatened with four years in prison for “predilection to social dangerousness” an international campaign quickly mobilized involving all sectors of civil society inside and outside of Cuba and the dictatorship released him with a fine and a lesser charge to avoid the avalanche of international attention and public criticism. A similar mobilization around the case of Juan Carlos González Marcos “Pánfilo” led to his release from prison.

Real change in requires that the laws be changed so that fundamental human rights are no longer systematically criminalized. The Varela Project was an initiative by Cubans to do just that and more than 25,000 Cubans signed the petition and the government’s response to this plea for reform: 75 new prisoners of conscience in March of 2003.

Eternal vigilance is not only the price for preserving liberty in free societies but also for saving lives and defending pockets of freedom in unfree societies and speaking out for those imprisoned for speaking their minds.