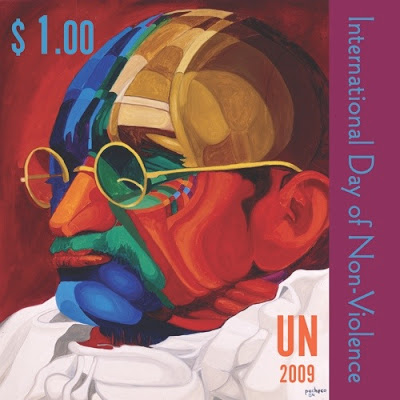 United Nations, Oct 3 (IANS) The United Nations has released a one-dollar colourful postal stamp of Mahatma Gandhi to commemorate the 140th birth anniversary of the apostle of peace observed Friday as the International Day of Non-violence.

The stamp, released here Friday by the UN Postal Administration, the world body’s postal agency, has been designed by Miami-based artist Ferdie Pacheco, with the Father of the Nation in red, blue and gold.

A long time Miami resident Dr. Pacheco arrived here "as a young doctor, transplanted from his native Ybor City in Tampa , he set up his practice on South West Eighth Street the year the early Cuban exiles began streaming into the city. In their stories, he found echoes of his own family's immigrant roots, as his father was the Cuban-born son of a Spanish consul on the island."

Ferdie Pacheco , MD has been called a Renaissance Man because of his prolific career. He has been successful as a pharmacist, medical doctor, Fight Doctor in boxing, including working as a corner man for twelve world champions, including Muhammad Ali for seventeen years. 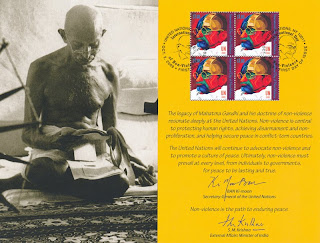