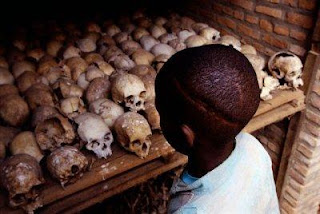 Mengistu strikes me as a quiet, serious, and sincere leader who is aware of the power of the masses. He is an intellectual personality who showed his wisdom on February 3. […] The prelude to this was an exuberant speech by the Ethiopian president in favor of nationalism. Mengistu preempted this coup. He called the meeting of the Revolutionary Council one hour early and had the rightist leaders arrested and shot. A very consequential decision was taken on February 3 in . […]Before it was only possible to support the leftist forces indirectly, now we can do so without any constraints.
Fidel Castro celebrating initiation of Red Terror on February 3, 1977
and implicating later Cuban involvement in later waves of the Terror.

“Mengistu, who fled to after he was deposed in 1991, was sentenced to death on Monday after he was found guilty in absentia of committing genocide during his 16-year rule.” - Melissa Gray, CNN May 28, 2008

The Cuban government finds itself on the defensive faced with charges and ample evidence that it is a racist regime. Worse still, a former supporter of the regime Abdias Nascimento has sent out an open letter that denounces political intimidation against those protesting against racism in Cuba and against citizens “who dare call for the establishment, in their country, of a State that is respectful of Civil Rights.” This letter has inspired dozens of prominent African American to join in the denunciation of institutionalized racism in Cuba and the demand for the immediate release of Afro-Cuban civil rights activist Dr. Darsi Ferrer. The dictatorship’s response: an orchestrated campaign attacking that “the signatories of Statement on Civil Rights in Cuba Are Misguided and Hypocritical.”

For over five decades the Cuban government has nearly perfected terror, manipulation, and propaganda in the pursuit of the maintenance of power. The regime has adapted to changing circumstances both internally and externally in the service of maintaining absolute power and magnifying its influence internationally. Twenty years ago the Cuban dictatorship conducted a tribute to the fallen and on December 7, 2009 remembered the 20th anniversary of Tribute Operation or as official Cuban press accounts referred to it as “a posthumous homage paid to the more than two thousand Cubans fallen on international missions. “

According to official data, during the more than 13 years of Cuban military involvement in countries like Angola, Ethiopia and Nicaragua, 2,085 Cuban soldiers were killed in combat missions, and another 204 died while performing civilian tasks bringing the total number to 2,289 Cubans killed on “internationalist missions.”

In the case of Africa, Cuba projected its military forces on the continent for decades with two high profile “victories” according to government news sources: Ethiopia and Angola. The reliance on military force and successes on the battlefield obscured some hard truths that over time are revealed by history. 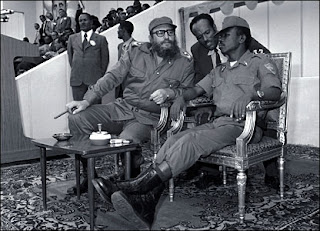 African Genocide
One of the deeds that the dictatorship in Cuba wants to keep hidden from the world and African Americans in particular, is its role in the mass killings in Ethiopia in the 1970s and 1980s. Beginning in late 1977, the first 5,000 of what would eventually number over 17,000 Cuban military personnel arrived in Ethiopia. By 1987 the Cuban presence had dropped to fewer than 2,000 personnel. During 1977-78, a conservative estimate of over 30,000 Africans perished as a result of the Red Terror unleashed by the Ethiopian Communists and their Cuban allies. Amnesty International concluded that "this campaign resulted in several thousand to perhaps tens of thousands of men, women, and children killed, tortured, and imprisoned." Sweden's Save the Children Fund lodged a formal protest in early 1978 denouncing the execution of 1,000 children, many below the age of thirteen, whom the communist government had labeled "liaison agents of the counter revolutionaries." Fidel Castro offered a different view of the terror addressing Cuban and Ethiopian troops in Ethiopia in September of 1978:

"Comrade Cubans, I can recall those days of December 1977 and January 1978 when we said farewell to the first Cuban internationalist combatants who were leaving for Ethiopia. [...]Eighteen months later we have returned to a Ethiopia which is victorious be cause of its combative sons' heroism and the support of international solidarity, as Comrade Mengistu stated 2 days ago. Moreover, it is also an already powerful Ethiopia. Tuesday's popular parade confirmed the enormous popular support for this revolutionary change. Yesterday's military parade tells us of the degree of organization and discipline achieved by the combative and courageous fraternal Ethiopian people. The rapid revolutionary offensive of the Ethiopian and Cuban troops practically annihilated the enemy. [...]Ethiopian brothers, together with you we have fought and we have won. Together with you we are ready to fight again and to win again. Together with you we pledge: Fatherland or death, we shall win!

The last few years of the Cuban government's collaboration with the Ethiopian communist regime were particularly brutal, and reminiscent of Stalin's treatment of the Kulaks in the 1930s. During the 1984-85 famine in northern Ethiopia, which shocked the conscience of the world and led Bob Geldof to organize the 1985 international rock concert "Live Aid," Cuban troops, following the lead of their ally, made the famine worse by refusing to allow food to be distributed in areas where inhabitants were sympathetic to opposition groups and engaging in a policy of "forcibly resettling people." This strategy resulted in the deaths of tens of thousands. According to a report issued by an international medical group as many as 100,000 Africans died.


Angola: Did Cuban involvement delay or speed up Apartheid's end?
Secondly, the military assistance to the African National Congress in the struggle against the South African apartheid state did not bring about the end of the racist apartheid regime, but may have in fact lengthened its lifespan. During the Cold War the goal of a Marxist-Leninist revolution in South Africa fit into Cuba's and the Soviet Union's geopolitical calculations. This terrified white South Africans, who at that time had acquired nuclear weapons and a willingness to use them to avoid a communist revolution backed by the black majority. Victories on Border States such as Namibia and Angola by Cuban troops served to aggravate those fears. The end of communism in Eastern Europe and the collapse of the Soviet Union demoralized the African National Congress who lost their main backers but it also ended the fears of the white minority that the transfer to black rule would mean becoming another satellite of the Soviet Empire.
This along with a new non-violent based anti-apartheid movement led both parties to the negotiation table and to Nelson Mandela’s release and subsequent election. Mandela's arrival to power in a post-Cold War setting set the groundwork for a democratic transition from the previous minority-white ruled regime. Civil rights leaders have celebrated Cuba's role in the wars in South Africa, Angola, and Namibia for nearly two decades, but the reality is that those wars probably prolonged the life of Apartheid by bolstering fear of a communist takeover.


Racism in Cuba
What of the plight of Cubans of African descent? Have things improved for the average Cuban of African descent? Cuba never had government enforced segregation and Jim Crow as in the United States. Racism did and does still exist despite the claims of the Cuban government and their apologists. Cuban blacks were found in Cuba's democratic political class and a number made it to positions of great power during the democratic era.

Black Panther William Lee Brent , a U.S. fugitive from justice who live in Cuba until his death on November 4, 2006, came to Cuba hoping that they had found the "antidote to racism." He discovered that Cuban blacks still suffer racism but no longer have the freedom to speak about it openly. "If a Cuban raises his voice to say, 'I am being discriminated against because I am black,' then he would be labeled a dissident." Cuban blacks, along with the rest of the Cuban people, do not have the right to their own opinion if it runs contrary to the permitted government line that Cubans are expected to take. 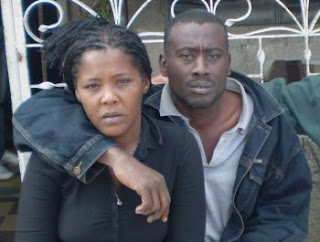 Nevertheless, many are speaking out and sometimes paying a terrible price. Jorge Luis García Pérez, an opposition leader in the locality of Placetas, was imprisoned on March 15, 1990 for speaking his mind openly and without fear in Cuba that is called "oral enemy propaganda." García Pérez was finally released more than 17 years later on April 22, 2007, having served one of the longest sentences for the present generation of prisoners of conscience in the island. While in prison he founded along with other prisoners of conscience, an organization called the Pedro Luis Boitel Political Prisoner’s Movement, to denounce the situation of prisoners inside the dictatorship's prisons and to promote civil disobedience in response to the jailers' brutality.

The letter denouncing those speaking up for the imprisoned medical doctor Darsi Ferrer, who like Jorge Luis, is only guilty of speaking his mind and exercising his rights claims in a patronizing tone that:


The elimination of racism, illiteracy and sexism as official state policy is commendable and sets an example for capitalist societies like the The Cuban government sent hundreds of thousands of its own people to fight for the liberation of southern . Many of the African-Americans who signed this statement against were just as confused about the struggle for African liberation.

The critics of Cuban government intolerance for dissent, and the right of Cubans of African descent to be able to speak out against racism in Cuba are not "confused" and if anything it is the Cuban government's take on the "liberation of southern Africa" that is confused. The Cold War and the Cuban presence in the region probably prolonged Apartheid in South Africa and in the case of Ethiopia led to the Cuban government's complicity with genocide.