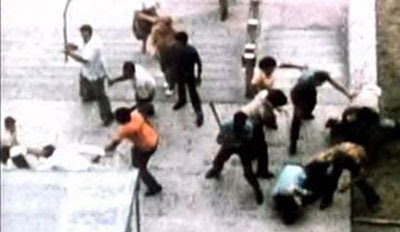 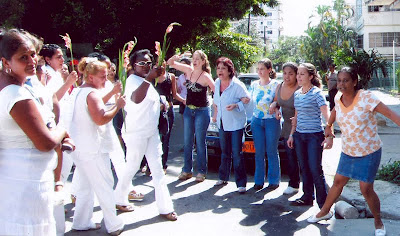 "Tolerance and human rights require each other." - Simon Wiesenthal

The sad truth is that most evil is done by people who never make up their minds to be either good or evil." - Hannah Arendt


It is understandable at a time when newspapers are in crisis and suffering cutbacks that professionals could get a story wrong, but the coverage of the attacks against the Ladies in White and other dissidents on International Human Rights Day save some notable exceptions swallowed the regime line of "pro-government mobs and government supporters" that in reality does not exist without even a question. The history of the creation and development of "acts of repudiation" has been well documented.

Mariel marked the first time socialist Cuba turned against itself. Thegovernment staged riots called actos de repudio -- street rallies inwhich neighbors turned against neighbors, harassing and tormenting those who wanted to leave the country. The victims were often pelted with rocks, tomatoes and eggs. Windows were shattered. Doors were knocked down. Some people were killed, dragged through the streets as trophies to intolerance and hate. Sometimes people trapped inside their homes chose to kill themselves rather than face their tormentors.


Both Amnesty International (AI) and the Office of the High Commissioner for the UN Human Rights Commission recognized that the individuals taking part in the acts of repudiation are "organized by
the authorities." AI has defined this form of state sponsored intimidation as follows:

Acts of repudiation [Actos de repudio] these are meetings or demonstrations organized by government officials or mass organizations supporting the government at which the person or persons concerned are
subjected to criticism and abuse, sometimes physical, because of their so-called counter-revolutionary views or activities.

The Cuban government is not static. Repression and the tactics change and evolve over time with one aim maintaining absolute power. When Eastern Europe and the Soviet Union began to transition to democracy in the late 1980s culminating in the peaceful dissolution of the USSR in 1991 the dictatorship in Cuba responded through a number of different initiatives one of them was to further refine "acts of repudiation" with the creation of the Brigadas de Respuesta Rápida "Rapid Response Brigades" to prepare for potential unrest and stepped-up dissident activity under the direction of the MININT (’s Ministry of the Interior). According to AI the:

Rapid Response Brigades, [Brigadas de Respuesta Rápida] were set up in 1991 to defend the country, the Revolution and socialism in all circumstances, by confronting and liquidating any sign of counter-revolution or crime and were subsequently involved in numerous violent confrontations with dissidents.

These are not spontaneous "pro-government mobs" but individuals transported by the dictatorship and instructed to attack those who dissent from the government line as was seen on International Human Rights Day where the violence was surgically directed against women standing up for their husbands who are Amnesty International prisoners of conscience and demonstrators and observers at a second demonstration. These individuals are not neighbors or supporters of the government who spontaneously appear to counter the demonstration. They are part of a “unified system of vigilance and protection (SUVP)” that comprise members of Committees in Defense of the Revolution (CDRs), mass organizations, and in some cases taken from their workplaces and obligated to participate to keep their jobs and are organized and directed by Cuban State Security. According to Human Rights Watch the Cuban government "employs so-called repudiation meetings (mitines de repudio), or acts of repudiation, to humiliate and intimidate dissidents publicly, sometimes violently." A more detailed description emerges in a 1998 report by Douglas Payne:

Their principle mission is to carry out acts of repudiation, which entail violent mob actions against dissidents or suspected dissidents, their homes, and any public demonstration of dissent. The mobs can involve up to hundreds of people who wield chains, bats and lengths of pipe. They shout slogans and threats, throw rocks and other crude missiles, deface homes with graffiti and otherwise damage property. The mobs are frequently invasive, breaking down doors and windows to carry out physical attacks against the occupants.

The participants in these neo-fascist attacks are probably taking part in this violent propaganda exercise in the Cuban dictatorship's version of Orwell's 2 minutes hate to avoid being on the receiving end of such an action themselves. For example during an act of repudiation on August 24, 2005 against Bertha Antunez the mob stopped the action when Bertha began to play Willy Chirino's "Ya Viene Llegando" and began to dance in the street. These are not regime supporters driven into an ideological frenzy to attack dissidents. They are people, in many cases brought by bus often times from work, and obligated by the government to attack other Cubans. It is the height of cowardice both for the Cuban government and the individuals taking part in the attacks and it is not a sign of regime strength but of fear that they will lose control.