"It is better to deserve honors and not have them than to have them and not deserve them."
- Mark Twain 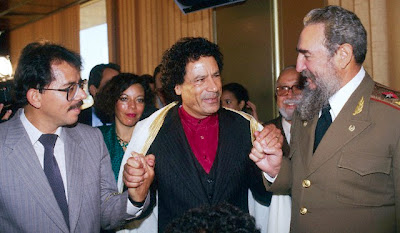 Amidst calls of the Libyan opposition's request for international intervention to prevent a "blood bath" in Libya and numerous reports of massacres of non-violent opponents by Muammar al-Gaddafi's henchman. Human Rights Watch reported on Friday, February 18, 2011 that security forces there have killed at least 84 in the previous three days. The news today from Libya is even more dire. Troops loyal to Gaddafi shot dead 15 mourners leaving a ­funeral in an escalation of ­violence. According to a Reuters report: "Snipers fired at protesters from a compound to which they had withdrawn, said the resident, who did not want to be named. 'Dozens were killed ... not 15, dozens. We are in the midst of a massacre here,' he said. The man said he helped take the victims to a local hospital."

There is plenty of dishonor to go around the George W. Bush Administration took Muammar al-Gaddafi's regime off the list of state sponsors of terrorism in 2006 and resumed full diplomatic relations. Despite the Libyan dictator being implicated in the murder of scores of Americans in the terrorist bombing of the PanAm 103 flight that blew up over Lockerbie, Scotland. To add insult to injury the Libyan terrorist that was captured, tried and imprisoned was freed and returned to Libya to a heroes welcome. In 2009 the Libyan regime named a sports stadium after Hugo Chavez of Venezuela. 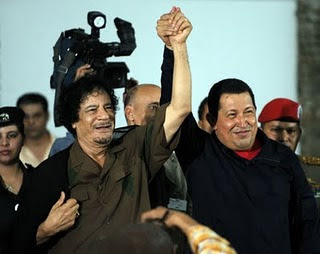 Muammar al-Gaddafi with 2004 Al-Gaddadfi Prize winner Hugo Chavez
However, considering the brutality visited on the people of Libya by its flamboyant tyrant perhaps one should take a second look at the Al-Gaddafi International Prize for Human Rights and some of the individuals awarded the prize over the years: Fidel Castro (1998), Hugo Chavez (2004) and Daniel Ortega (2009). 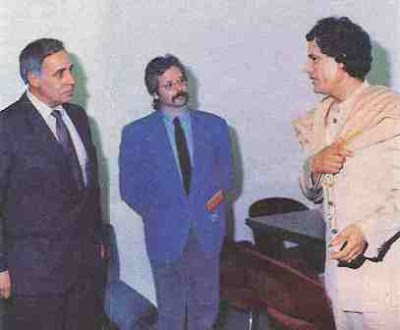 Now is the time to pray for the well being of the people of Libya as they attempt to shake off four decades of tyrannical rule by an individual willing to slaughter huge numbers of his country men to hang on to power and for the people suffering under regime's run by the winners of the al-Gaddafi "human rights" prize.

Mona Eltahawy on her twitter account on Saturday night passed along a message that a source of hers in Libya recieved via text on his cell phone:

‘We will hit with an iron fist all those who oppose the revolution’," SMS sent to #Libya mobile phones, via my #Libya source.

The term Revolution here is in reference to Gaddafi's 1969 coup against the Monarchy and not the pro-democratic revolution in the streets right now. A Cuban would find the rhetoric familiar but back dated to 1959.
Posted by John Suarez at 7:15 PM