Cuba and the triumph of love over hate and death 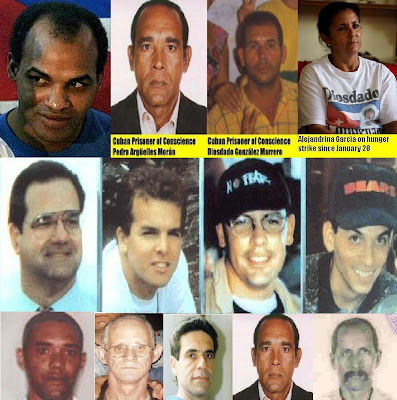 Later this month on February 23 and February 24 two anniversaries of innocent men extrajudicially executed by agents of the Cuban regime while trying to save the lives of others will be observed.

One year ago on February 23, 2010 at 3:00pm Cuban prisoner of conscience Orlando Zapata Tamayo died after 83 days on hunger strike demanding an improvement of treatment for all prisoners. He was demanding an end to systematic abuse and torture that has been documented in Cuban prisons. Prison officials responded to his water only hunger strike by denying him water, in an attempt to break his spirit, but instead contributed to his death.

15 years ago on February 24, 1996 three Brothers to the Rescue planes searched the Florida Straits for Cuban rafters. Cuban MiGs provided information by Cuban spies that had infiltrated the group hunted them in international airspace and shot down two of the small civilian planes with air to air missiles leading to the deaths of Carlos Costa, Pablo Morales, Mario De La Peña, and Armando Alejandre Jr. Studies on Cuban rafters state that tens of thousands of rafters have died trying to reach freedom. Brothers to the Rescue came into existence in 1991 precisely to save lives and in the end saved thousands of refugees.

Mohandas Gandhi’s observation that “[t]he willing sacrifice of the innocent is the most powerful retort to insolent tyranny that has yet been conceived by God or man” has been proven right in the above mentioned events and in events unfolding in Cuba today.

Since January 28, 2011, Alejandrina García de la Riva has been on a water only hunger strike demanding that her husband, Diosdado González Marrero, an Amnesty International prisoner of conscience imprisoned since 2003 be freed. On February 1 Diosdado González Marrero and another prisoner of conscience from 2003, Pedro Arguelles Morán went on hunger strike demanding their own freedom and the freedom of nine other prisoners of conscience imprisoned during the Black Cuban Spring in 2003.

On Friday, February 4, 2011 Angel Moya Acosta, an Amnesty International prisoner of conscience also imprisoned during the 2003 crackdown was told that he would be released from prison. Angel rejected the offer saying that prisoners of conscience Guido Sigler Amaya, Pedro Arguelles Moran, Librado Linares and Eduardo Díaz Fleitas all suffering from illness be released first.

The totalitarian dictatorship in Havana exposes itself as the evil and life destroying system it is, by slandering its victims in a systematic effort to spread the "big lie," and in doing so expose the profound spiritual corruption it suffers from and the need for the regime to end in favor of a free society where all Cubans have a right to say what they think and associate freely without fear and enjoy all their fundamental human rights as was done in most of Eastern Europe between 1989 and 1991.

It is important to raise awareness about Alejandrina, Diosdado, Pedro and Angel in their efforts to save lives and demand freedom for prisoners of conscience imprisoned since 2003 who should never have spent a day in jail much less 8 years. Their courageous stand needs to be recognized and honored and in doing so provide them with a measure of protection.

On June 22, 1963 in a speech in Detroit, Michigan Martin Luther King Jr said that “If a man hasn't discovered something that he will die for, he isn't fit to live.” All of these men and women have not only demonstrated that they are fit to live but that they are moral exemplars that all can learn from.

An international call has been made to all people of good will to join in a 24-hour water only fast starting at 3pm on February 23, 2011 the day and time that Orlando Zapata Tamayo died on hunger strike followed by a silent vigil the following day from 3:21pm to 3:28pm to correspond with the times Carlos Costa, Pablo Morales, Mario De La Peña and Armando Alejandre Jr. were shot down on February 24. They all demonstrated with the lives they led and by how they died that the Bible passage, John 15:13 is as relevant as ever: No one has greater love than this, to lay down one's life for one's friends.

Armando Alejandre Jr, Carlos Costa, Orlando Zapata Tamayo, Mario De La Peña and Pablo Morales live on in the lives they saved and in the memories of all who know them. In rejecting hatred and vengeance while embracing love and justice they are honored.
Posted by John Suarez at 6:10 AM