365 days since prison officials announced the death of Orlando Zapata Tamayo. He had suffered beatings, torture, and years added to his unjust prison sentence because Orlando continued to denounce human rights abuses in prison. He refused to look the other way and remain silent.

The secret police and prison guards drove him to the last recourse of a non-violent activist: the hunger strike. Even there the regime sought to torture and humiliate denying a man on a water only hunger strike - water. It is believed that act of torture contributed to the failure of his kidneys and to his death.

Difficult days followed with new outrages committed by the Cuban regime. Attacks against Orlando Zapata's family and a campaign of harassment against his mother, Reina Luisa Tamayo. Regime rent a mobs physically assaulted the Cuban Ladies in White while regime apologists claimed the bad press was part of a media conspiracy. Witnessing Gaddafi's brutal tactics and language in Libya is sadly all too familiar to Cubans on the island. As is the threat that expressing one's desire for freedom with concrete action (other than seeking exile) is a death sentence. 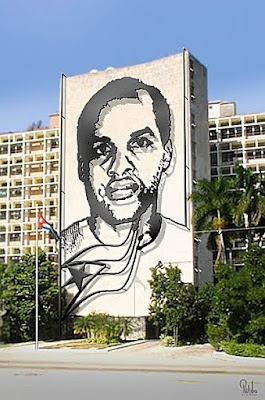 Nevertheless, the last year demonstrates that one man can shake an entire regime and that a group of women peacefully marching and attending Sunday Mass asking for their loved one's freedom is considered a national security threat by the dictatorship. Cubans have been witness to the power of nonviolent resistance. What Vaclav Havel called the power of the powerless.

Friends across cyberspace are remembering Orlando Zapata Tamayo, documenting the ongoing crackdown against the democratic opposition and requesting that we keep Orlando and his family in our prayers. Amnesty International is urging the Cuban government to end its harassment of Orlando Zapata Tamayo's family. Yoani Sanchez, the award winning Cuban blogger, has a remarkable essay titled The Graveyard Police and image dedicated to Orlando Zapata (reproduced above).

Today at 3:00pm I will join with friends around the world and in Miami for a 24-hour water only fast in honor and remembrance of Orlando Zapata Tamayo and the next day join in a silent vigil for Armando Alejandre, Carlos Alberto Costa, Mario Manuel de la Peña, and Pablo Morales all murdered by the regime in Cuba on February 24, 1996 as they searched the Florida Straits in two Brothers to the Rescue planes in the hope of saving the lives of Cuban rafters.

These five men demonstrate that the power of love (agape) and sacrifice outlives that of the hatred and narcissism that fuel the dictatorship in Cuba. It is for that reason that I can say with confidence that Orlando Zapata Tamayo, Armando Alejandre, Carlos Alberto Costa, Mario Manuel de la Peña, and Pablo Morales will live on long after the Cuban regime has died and become just a bad memory as Cubans become, once again, the authors of their future.

February 23, 2010 the day Orlando died defending Cuban dignity and February 24, 1996 the day Armando, Carlos, Mario, and Pablo were brutally murdered as they searched the seas to save the lives of their Cuban brothers and sisters. The days of February 23rd and 24th that for over a century recalled the eve and day of the start of a war will in the future be remembered by a new generation in a new Cuban Republic as days in which nonviolent resistance and human spirit triumphed over violence and materialism forging the foundation of a free Cuba. I look forward to the day that Orlando Zapata Tamayo looks out over Civic Square and over a free Cuba.
Posted by John Suarez at 12:20 AM