Former President of the Czech Republic Vaclav Havel welcomed the release of the Cuban prisoner of conscience Óscar Elías Biscet González on March 11, 2011. One of the most important Cuban dissidents, Biscet belonged to the "Group of 75" imprisoned in March 2003. Peacefully promoting human rights and democracy in Cuba, he spent the majority of the last 12 years in prison. The letter was published by the Czech Embassy in Washington DC. This is not the first time President Havel has exchanged letters with a Cuban dissident. Back in 2004 he had an exchange of letters with Oswaldo Payá Sardiñas. 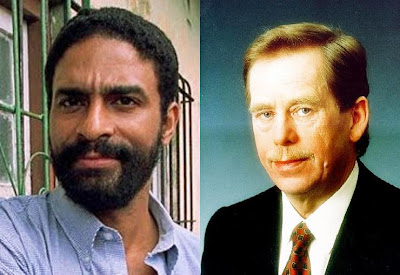 I have always believed that the persecution and imprisonment of the Cuban opposition has been and continues to be an unlawful and brutal violation of the basic human rights and freedoms of people. The international solidarity and focused diplomatic attention have been effective and, because of this, the Cuban government has been forced to release some of the prisoners of conscience. I am glad I can now congratulate you, but, at the same time, I have not forgotten the other prisoners and I am determined to continue to call attention to their plight.