"Get up, stand up: stand up for your rights!" - Bob Marley, Peter Tosh 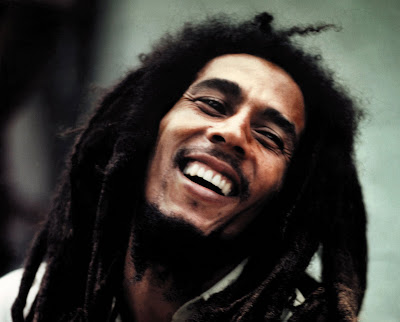 Bob Marley
The totalitarian regime in Cuba seeks to rewrite its past to give the appearance of being relevant and "with it." The trouble for the dictatorship's propagandists is that there is no memory hole to do away with the inconvenient facts. For example, the dictatorship erecting a statue of John Lennon in 2000 after censoring him and his music while he was alive. Now they are at it again with Robert Nesta Marley better known the world over as Bob Marley with a concert in his honor on the 30th anniversary of his death.

Bob Marley performing Get Up, Stand Up for your rights
Bob Marley passed away in Miami on May 11, 1981 from cancer at the age of 36. He was a master singer-song writer who spread both reggae and his religious belief known as Rastafari around the world. When asked about the relationship between the Rastas and the socialist government of Jamaica under Michael Manley in a July 19, 1978 interview with Jeff Cathrow he was direct and to the point:

MARLEY: "No mon! Michael Manley is a Marxist-Leninist-Socialist, Rasta is a monarchy. Dig It!"
JC: "Do you think Manley will be overthrown?"
MARLEY: "I don't know, mon."
JC: "If something happened to Manley, what do you think would happen to Jamaica?"
MARLEY: "ANYTHING that 'oppen, it have to be better!"

In his final interview on September 18, 1980 in New York City doing shows at Madison Square Garden and preparing to embark on a national tour he was asked about the Cubans then in Ethiopia then supporting the now convicted war criminal Mengistu Haile Mariam:

M:Well, I did know that this year is the fiftieth year - pass them back to Rasta.

Cole: the fiftieth anniversary of the coronation of His Imperial Majesty, Emperor Haile Selassie the First.

M: Is the Golden Jubilee, that's it. November 2nd. Been 50 years now since Christ government set upon earth, returned to earth. The Russians can't take guns and destroy it you know. Bad man.

W: The Russians are trying?

W: What do you think about the Cubans there?


The Trial of Mengistu Haile Mariam and the Derg

There is reason to Bob Marley's hostility for both Mengistu Haile Mariam and the Cuban regime that backed him. As a Rastafari he believed that Emperor of Ethiopia Haile Selassie I was the reincarnation of Jesus Christ. Selassie had served first as regent of Ethiopia from 1916 to 1930 and was emperor from 1930 to 1974. He was the heir to a dynasty that traced its origins to the 13th century, and from there by tradition back to King Solomon and the Queen of Sheba. At the League of Nations in 1936, Emperor Selassie condemned the use of chemical weapons by Fascist Italy against the people of Ethiopia. 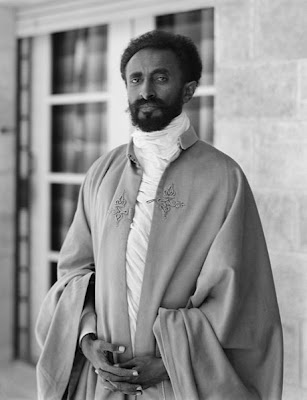 Emperor of Ethiopia Haile Selassie I
Emperor Haile Selassie's internationalist views led to Ethiopia becoming a charter member of the United Nations, and his political thought and experience in promoting multilateralism and collective security are still viewed as part of his enduring legacy. Despite inspiring the founding of a religion that today has up to 800,000 followers he remained an Ethiopian Orthodox Christian until his death. 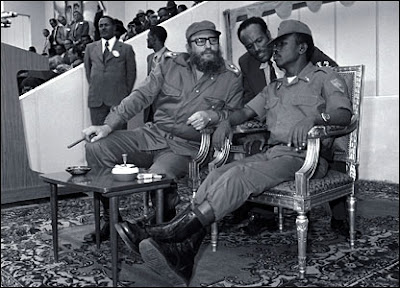 Fidel Castro with his comrade Mengistu Haile Mariam
Emperor Haile Selassie was deposed in a military coup and it is believed that the officers smothered him and that Mengistu Haile Mariam: "ordered the emperor's body to be buried head down in the palace and had a lavatory erected over the grave so that he could express daily his contempt for the monarch." Winston Churchill had described Emperor of Ethiopia Haile Selassie I as "the only enlightened Abyssinian prince."

Less than a decade after Mengistu fled into exile on November 5, 2000, Haile Selassie was given an Imperial funeral by the Ethiopian Orthodox church. Bob Marley's widow, Rita Marley, participated in the funeral. 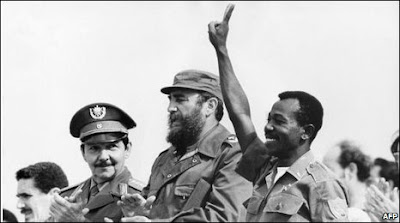 Raul Castro & Fidel Castro with close ally Mengistu Haile Mariam
Fidel and Raul Castro's comrade, Mengistu was found guilty of genocide on December 12, 2006, and was sentenced to life in prison in January 2007. He was sentenced to death in absentia on May 26, 2008 following an appeal. Mengistu currently resides in Zimbabwe under the protection of African despot Robert Mugabe. Fidel Castro in a conversation with the then East German dictator Erik Honecker about Ethiopia praised his comrade in arms:

Mengistu strikes me as a quiet, serious, and sincere leader who is aware of the power of the masses. He is an intellectual personality who showed his wisdom on 3 February. [...]He called the meeting of the Revolutionary Council one hour early and had the rightist leaders arrested and shot. A very consequential decision was taken on 3 February in Ethiopia. The political landscape of the country changed, which has enabled them to take steps that were impossible before then. Before it was only possible to support the leftist forces indirectly, now we can do so without any constraints.

Bob Marley's response was to speak truth to power when he said: "Mengistu is not a Ethiopian. Mengistu is a Russian." When asked about the Cubans, Marley's response was that they were Russians too. They were outsiders that had deposed and murdered the great king that the late reggae artist worshiped as the reincarnation of Jesus Christ. That combined with his music and bohemian lifestyle both a rejection of all that the dictatorship in Cuba represents.

The best way Cubans can honor Bob Marley is to get up and stand up for their rights. Something that terrifies the dictatorship seeking to exploit this great artist's memory.
Posted by John Suarez at 10:09 PM