"They can either kill us, put us in jail or release them. We will never stop marching no matter what happens." - Laura Pollan 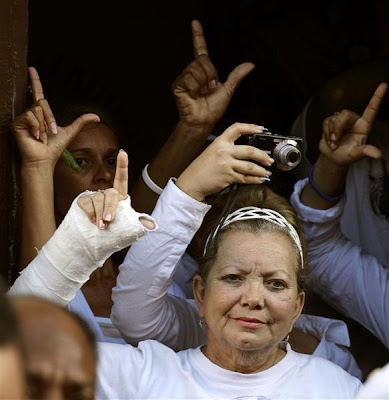 Laura Inés Pollán Toledo died tonight at 7:50pm from heart failure at the age of 63. One week after she had fallen suddenly ill from a respiratory infection compounded with dengue fever and already existing condition as a diabetic. News wires from around the world: the BBC, AFP, AP, CNN, Reuters, The Washington Post, and The Miami Herald reported on the passing of the founder of the Ladies in White.

Prior to her husband's arrest in March of 2003 she was an apolitical high school literature teacher who loved cats and plants. That all changed when her husband, Héctor Maseda Gutiérrez, was sentenced to an unjust 20 year prison sentence for his activities as an independent journalist. He had been a nuclear engineer until being demoted in 1992 for ideological errors.

Within days of the March 2003 show trials and the unjust prison sentences the Ladies in White came into existence and Laura Pollan was one of the founders of the movement. Their demands were simple and direct. The freedom of their loved ones. Their methods were nonviolent, strategic, and well thought out. In a 2005 interview Laura Pollan stated their agenda: "We fight for the freedom of our husbands, the union of our families. We love our men."

Tonight the dictatorship has mobilized its state security forces around the country and they are visibly nervous. Women attempting to travel to Havana from the provinces to pay their respects to the former high school literature teacher now turned human rights icon have been arrested reports Jose Daniel Ferrer Garcia and Yoani Sanchez.

For the world today and for future generations her life and courageous example are transparent and visible for all to see. It is important for those who may not know this woman and the movement that she led, that will now have to continue without her, that what she and the Ladies in White have accomplished be both remembered and acknowledged. Blogs such as Uncommon Sense, Capitol Hill Cubans and Babalu have already started and others will continue over the days and weeks to come. 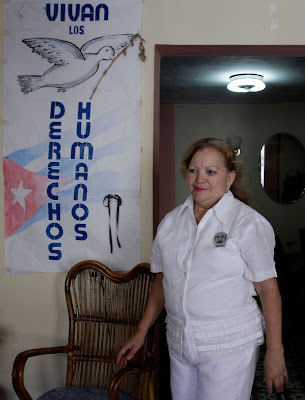 Lady in White Laura Pollán
Let us honor this woman who demonstrated since March of 2003 until her death resolute courage in the face of a brutal totalitarian dictatorship. Fortunately, for posterity her words are both written down and recorded and they will live on long after the Castro dictatorship is just a bad memory. At the same time the slanders, libels, assaults and mistreatment that she and other Cuban women have suffered for defending human rights and expressing themselves freely have also been documented. 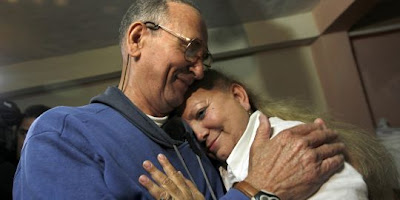 Laura Pollan reunited with her husband Hector Maseda
It took eight years but in the Spring of 2011 Laura Pollan was able to embrace her husband now free from his unjust captivity. At the same time she continued the struggle for the freedom of the remaining Cuban political prisoners. The Ladies in White succeeded in freeing their loved ones imprisoned in the March 2003 Cuban Black Spring.

Returning to the sad news of the night

According to Yoani Sanchez reports that Laura's wake will take place over the next 2 hours at La Nacional funeral parlor at Infanta and Benjumeda in Central Havana on the 2nd floor in Chapel E. Ladies in White from around the country are trying to reach the capitol to pay their respects. The family has announced they will have a small private funeral and that Laura will be cremated afterwards. The picture below taken late last night was of the honor guard for Laura Pollan. 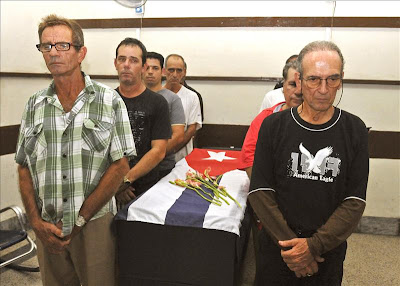 Honor Guard for Laura Pollan (Her husband Hector Maseda front on the right)
Tonight their was also a special service at La Ermita de la Caridad at 10:30pm for Laura Pollan. At least one of the Ladies in White was there, Blanquita Gonzalez the mother of former prisoner of conscience Normando Hernandez.


Excerpt from service at La Ermita in Miami for Laura Pollan

According to Yoani Sanchez, in a 2:00am tweet, starting Saturday at 9:00am and over the next three days a book of condolences for Laura Pollan will be available for signing at Neptuno 963 between Hospital & Aramburu in Central Havana in Cuba.

Over the past week I prayed for Laura Pollan's speedy recovery and tonight I continue to pray for her immortal soul, her family and friends. May her dream of a free Cuba where there are no political prisoners soon be realized. 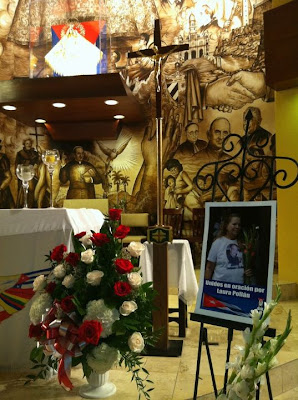