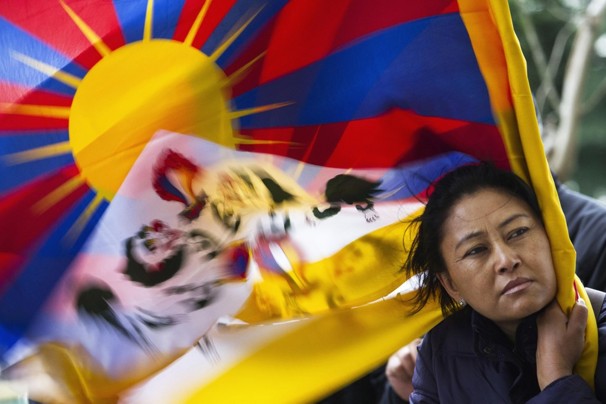 On the 54th anniversary of Tibet's National Uprising Day in in Dharamshala, India the Tibetan parliament issued an important statement. The full statement is available online and the following is an excerpt:

Given the fact that this year's 10th March anniversary coincides with the change of leadership in the People's Republic of China, we would like to propose the following mutually beneficial suggestions for consideration by the new leaders of China:

1. Accept that the Sino-Tibetan dispute deserves to be, needs to be, and can be solved and begin at once peaceful negotiations on the basis of the mutually beneficial middle way approach.

2. Concerning the critical situation in Tibet today in general and, especially, in order to save the Tibetan people whose precious lives are still being lost in self-immolations, the government of China should carry out an investigation on the basis of seeking truth from facts and with impartiality. Besides, people from the international media as well as from governments and non-governmental organizations should be allowed to visit Tibet.
3. The government of China should change the hardline, violent, and oppressive policies it is currently pursuing in Tibet, for if it fails to do so, there is no doubt that the hostility between it and the Tibetan people will increase. Hence, China must forthwith end its policies of violence and repression against the Tibetan people.
4. On the basis of a clear understanding of the gravity of the highly critical situation in Tibet today, the government of China should protect the Tibetan people's human rights, their religion and culture, their linguistic heritage, and their natural environment. It should end the ethnic discrimination, violent repression, torture, and other forms of ill-treatment against the Tibetan people. In this milieu, it should also release forthwith all the Tibetan political prisoners, including the young reincarnate Panchen Rinpoche.

The international community also should not maintain a distant view of the ongoing violent repression being carried out against the Tibetan people. Rather, leaders of nations and officials of governments should adopt a clear stand and intervene in whatever fruitful ways they are able to, for the time to act in this way is overdue and we would like to make an emphatic appeal in this regard.

Within the Tibetan people ourselves, efforts should be directed at seeking to achieve a just solution to the Tibet issue, acting with a sense of fraternity and unity. With this end in view, the Tibetan people should pool whatever capabilities they may have for the purpose of achieving the common goal. They should not resort to speaking, writing articles, and propagating information through the various communication channels without any sense of responsibility. Rather, we emphatically appeal that everyone stand together, turn in the same direction, and direct their efforts at achieving the common desires of the Tibetan people both in Tibet and in exile.

Cubans and Tibetans share two things in common despite our profoundly different histories and religious traditions that bring us together in shared misery. We both have suffered under tyranny since the early 1950s and over a half century later continue to struggle for the restoration of our freedom. China became a communist regime in 1949 and immediately began asserting territorial designs on Tibet. Communist China invaded and occupied Tibet in 1950. Cuba was a free and independent republic with a constitutional democracy until March 10, 1952 when Fulgencio Batista overthrew the democracy in a coup d'état against the last democratically elected president Carlos Prio Socarras.


Both Cubans and Tibetans looked to 1959 as an opportunity for democratic restoration and liberation. Instead tyranny entrenched itself. The Cuban nightmare began amidst the hope on January 1, 1959 that the departure of Fulgencio Batista into exile would mean a democratic restoration and an end to authoritarian tyranny instead it was the beginning of a new totalitarian communist tyranny headed by Fidel Castro. Cloaking itself in the legitimacy of nationalism and anti-Americanism it justified the systematic denial of human rights in the rhetoric of anti-imperialism and the “Yankee threat.”

Tibetan hopes that a national uprising that erupted in Lhasa on March 10, 1959 would drive the Chinese occupiers out of their homeland. Instead His Holiness the Dalai Lama had to flee to India to avoid imprisonment or assassination as the Chinese communists crushed the uprising.

However, as first witnessed with the regime’s support of the Soviet invasion of Czechoslovakia in 1968 and later its invasion of Afghanistan in 1979 their so-called anti-imperialism demonstrated ideological exceptions. The same holds true for Tibet. Fidel Castro in his March 31, 2008 “reflection” titled “The Chinese Victory” denies that Tibet was ever independent justifying and defending the Chinese occupation of that small country. It is a shameful rewriting of history.

It is time to hold both Fidel Castro and the Chinese communists accountable to the truth.

On February 24, 2011, Students for a Free Tibet at Florida International University co-sponsored with the Free Cuba Foundation the 15th anniversary silent vigil of the 1996 Brothers to the Rescue shoot down. One year later on March 10, 2012 in London we participated in a march from White Hall 10 Downing Street to the Chinese Embassy protesting 62 years of Chinese occupation and repression.