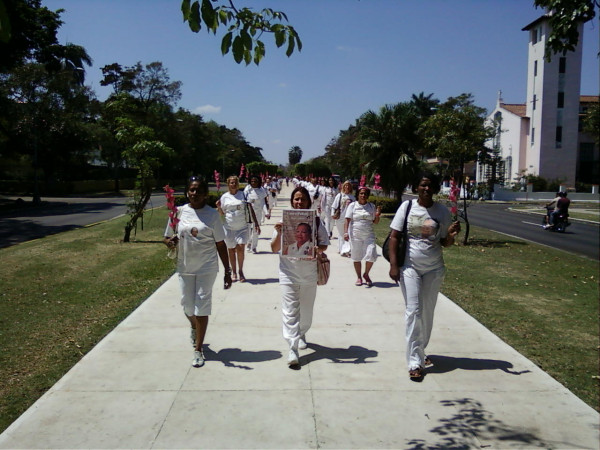 The Ladies in White celebrated today the 10th anniversary of the group's creation taking on their walk a photo of their late leader, Laura Pollán. "Fifty three Ladies in White on Fifth avenue on their customary Sunday walk after Mass were accompanied by thirty seven human rights activists," reported their representatives over twitter. Angel Moya over twitter placed the number at 54 and posted the above photograph of the Ladies in White marching. At the same time reports emerged from the island that at least 23 women were detained.

Never forget how this group of courageous women came into existence.

Days after one of the worse crackdown's on Cuba's national civic movement that began on March 18, 2003 the wives, sisters and daughters of these unjustly imprisoned human rights defenders formed the Ladies in White. An association of women seeking the release of their unjustly imprisoned husbands, brothers and fathers.

Ten years later, much has changed yet much remains the same. One of the founders of this human rights organization, died under suspicious circumstances on October 14, 2011 and these women are still marching and demonstrating demanding the release of all of Cuba's political prisoners. Berta Soler became the new spokesperson after Laura's untimely death and is now speaking out for the Cuban people at international forums and being attacked with crude and racist caricatures by the dictatorship in Cuba.

On March 18, 2013, the tenth anniversary of the start of the Black Cuban Spring, Cuban women were brutalized by Cuban state security and their operatives.

The Ladies in White achieved their immediate goal of getting their family members out of prison although their loved ones could still be returned to prison to serve out the remainders of their unjust prison sentences. They have now expanded their goals beyond the personal demanding freedom for all.

We must also remember the price they continue to pay in their struggle for human rights and freedom. Sonia Garro spent her second Easter behind bars without trial and has been in a Cuban prison since March 18, 2012.

The video below is from 2012 but still reflects the courage of these women and the men they are defending through their nonviolent action.