There are days that one will never forget. Days that one remembers where they were when the phone call arrived and the news broke, but on March 18, 2003 began a month that I'll never forget. The calls began arriving at the Cuban Democratic Directorate from all over Cuba that human rights defenders and independent journalists were being rounded up and their homes searched by Cuban State Security agents. Over a span of 48 hours 75 activists who would become known as "the group of the 75" were rounded up and jailed.

Eleven days later would find me along with Jannet Rivero at the United Nations Human Rights Commission in Geneva, Switzerland and for both of us it was our first time there. Over the previous five years Janisset Rivero had represented the Cuban Democratic Directorate at the Commission. She prepared us and guided us around all the bureaucratic pitfalls. Our objective was to denounce the crackdown while relaying as much information as possible to human rights experts that wanted to know what was taking place. The detentions had taken place between March 18 and 19 but it was not until April 1, 2003 that relatives were notified of the summary trials that were held April 3 – 7, 2003 and the draconian prison sentences issued by the regime.

Reports circulated that prosecutors were requesting death penalties for some of the group of the 75. The death penalty had in fact been requested for both Jesús Mustafá Felipe and Jose Daniel Ferrer Garcia.

At the same time another event transpired that demonstrated the willingness of the Castro regime to kill. On April 2, 2003 a ferry with 40 people on board going from Havana to Regla was hijacked by 11 Cubans who wanted to take it to the United States of America., but ran out of fuel 45 kilometers from the Cuban coastline.

The hijackers threatened to harm the passengers if there demands to flee Cuba were not met. However, the situation ended without violence and the regime in an official note announced that “all of those who had been on board were rescued and saved without so much as a shot or a scratch.”

The hijackers underwent summary trials between April 5 – 8, 2003 and three of them Lorenzo Enrique Copello Castillo, Bárbaro Leodán Sevilla García, and Jorge Luis Martínez Isaac, were sentenced to death and executed on April 11,2003.

The threat of death penalties being applied against the nonviolent activists and the summary nature with which the dictatorship would carry out the unjust sentence created a level of anxiety and pressure on all of us both in Geneva and in Miami working to relay the information as quickly and accurately as possible while seeking out press coverage and solidarity from others in order to pressure the dictatorship into not carrying out its threats. Over the course of our time there we spoke on five occasions before the Human Rights Commission about the situation in Cuba providing updates as events transpired. 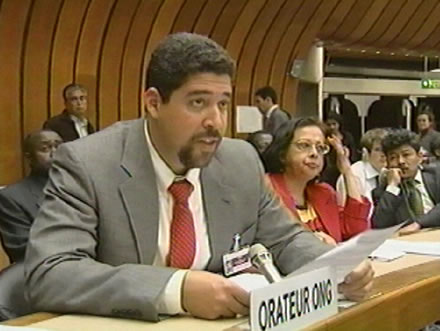 On April 3, 2003 in the midst of the summary trials both of us addressed the United Nations Human Rights Commission on the agenda item "Question of the violation of human rights and fundamental freedoms in any part of the world"and summaries remain part of the official record:

JOHN SUAREZ, of Christian Democrat International, said that in recent days the Cuban Government had carried out one of its largest crackdowns ever against democratic opposition in Cuba. Homes were ransacked, books and computers confiscated and about 48 activists were arrested. During 2002 the number of assaults and arrests against independent journalists and human rights activists in Cuba had increased considerably. Taking advantage of the fact that the international community was primarily focused on the outbreak of war in Iraq, Cuban authorities had arrested dozens of non-violent activists in the past two weeks.
There were hundreds of political prisoners in Cuba. These defenders of human rights were systematically denied medical and religious attention and were held in provinces far from their places of residence.

JANNET RIVERO, of Liberal International, said the President of Liberation International had recently made an urgent appeal for the immediate release of dozens of human rights activists arrested in Cuba. During 2002, nearly 30 activists had been arrested and many were still in prison, not yet having been tried. Also during 2002, dozens of independent journalists had been arrested or fined for exercising their rights to inform and be informed freely. And more than 180 elementary, high school and college professors had been fired from their jobs or prevented from teaching for not responding unconditionally to the ideas and political campaigns of the Government. University students, meanwhile, had been expelled for signing a citizen initiative seeking the restoration of fundamental rights.

On April 9, 2003 in the general debate on civil and political rights both of us again took the floor and in addition to the plight of the group of the 75 addressed the fate of other nonviolent activists:

JANNET RIVERO, of Liberal International, said attention must be paid to the policy of the Cuban Government of detaining political prisoners.  Some had been unjustly held for years, and recently there had been a wave of new repression against those advocating for human rights and democracy.  The repressive policy of Cuba had not stopped since 1959 and was aimed at keeping people from enjoying their civil and political rights.
Francisco Chaviano Gonzalez had been a prisoner of conscience for 15 years.  Liberal International pointed out that a Government that denied civil and political rights to its citizens was not a legitimate Government.  Liberal International called for the Cuban Government's repression of the Cuban people to cease.


JOHN SUAREZ, of Christian Democratic International, said that more than 100 human rights activists had suffered searches, arrests and expedited trials in Cuba.  Many had already been condemned to sentences of up to 26 years in prison for defending civil and political rights in the country.  On 7 April 2003, Dr. Oscar Elias Biscet was tried without due process and today was facing up to 25 years in prison for defending human rights in Cuba.  In Cuban prisons, political prisoners were denied medical assistance as a form of punishment for upholding their ideas.  Highly dangerous criminals were used by State Security to attack imprisoned activities, as was the case of Nestor Rodriguez Lobaina, a young activist whose jaw was broken in three parts, and who was severely beaten on three more occasions before being taken to the hospital.


Unfortunately, in 2013 at the United Nations Human Rights Council and in recent years, the interventions are no longer about only prisoners of conscience, and the torture and mistreatment of nonviolent activists, but their deaths under suspicious circumstances such as in the cases of Orlando Zapata Tamayo, Juan Wilfredo Soto Garcia, Laura  Pollán and now Oswaldo Payá Sardiñas.

The formation of the human rights movement, the Ladies in White in March of 2003 led by capable women such as Laura  Pollán and Berta Soler who week in and week out challenged the repressive forces on the island with nonviolent civic resistance. Women marching with flowers, gladioluses, through the streets of Havana demanding their loved ones freedom and the freedom of all political prisoners.  International human rights organizations played a crucial role in investigating and confirming that these activists were indeed prisoners of conscience.

At the same time an international campaign led by members of parliament and former heads of state that petitioned and lobbied the Cuban government to release its prisoners of conscience made a great impact. The International Committee for Democracy in Cuba , an initiative proposed by Václav Havel, was formed in September of 2003 in response to the crackdown. All these factors combined with the death of Orlando Zapata Tamayo on February 23, 2010 and rising violence against the Ladies in White by the regime and its failure to crush their nonviolent protests forced the regime to the negotiating table, but it had one more trick up its sleeve. Instead of directly meeting with the Ladies in White, thus being forced to recognize the nonviolent opposition movement, it sought the Catholic Church - not as a mediator between two opposing sides, as I'd first hoped - but the side the regime would negotiate with. This placed the Cuban Church in the unenviable task of taking the results of that conversation and call to the prisoners and their families and explain the regime's terms.

The release of the prisoners led to the international community lowering its guard and the dismantling of the committees whose sole objective the freedom of the group of the 75 had been achieved. This combined with a number of other factors led the Cuban regime to believe that it could literally get away with murder if it was done in a discrete matter. Despite the international attention and outrage over the death of Orlando Zapata Tamayo other deaths failed to spark the same level of outcry and their frequency began to increase. Reaching into higher echelons of the opposition leadership, and until now reaching its culmination in the deaths of  Laura  Pollán and Oswaldo Payá Sardiñas.

However it appears that the regime underestimated the Payá family's courage and persistence when making their calculations and there is now an international campaign underway to learn the truth and pursue justice, not revenge.

Both Oswaldo and Laura were not satisfied with a fraudulent change that would maintain the regime intact while granting it international legitimacy which would mean more money and credits that it needs to continue.

There are great challenges before the opposition but one of the lessons of the Cuban Black Spring and the decade that followed is that with courage, persistence and international solidarity even a brutal totalitarian dictatorship can be pressured into releasing all of its prisoners of conscience.

Unfortunately, failing to maintain the vigilance and the pressure only means that they were replaced by new ones and that the regime will retaliate and eliminate those it considers a threat when international vigilance is on the wane.

The good news is that ten years later Regis Iglesias, one of the prisoners of conscience of the Black Cuban Spring doesn't need me to speak for him at the United Nations Human Rights Council. The bad news is that he needs to be there addressing the extrajudicial killings of his friends Oswaldo Payá Sardiñas and Harold Cepero Escalante.