“I always try to make all Spanish-speaking people laugh. Some laugh more than others, but what’s most important to me is that people get enough ‘stuff’ to improve their health.” - Guillermo Alvarez Guedes, 2010 interview with El Nuevo Herald


Heard the news earlier today, career that spanned eight decades of bringing laughter and joy has come to an end. Met Guillermo Alvarez Guedes on three occasions. He was gracious, honorable, and extremely funny each time we crossed paths and the world is a lesser place without him in it. The first and last time where in marches protesting the Cuban dictatorship in Little Havana on Calle Ocho, but it is the second occasion that will be shared here.

When I was a college student at Florida International University, in the early 1990s, a friend of mind from high school who was studying at Tulane University was taking a psychology of humor class at FIU during the summer and invited me to sit in on one his classes because Guillermo Alvarez Guedes would be presenting a lecture on humor.

The audience of students where nearly all non-hispanic and Alvarez Guedes made a presentation on the psychology of humor and used a bit about the basic Spanish vocabulary, Americans would have to adopt to survive in Miami. He also said in his introduction that he would speak Spanish with an American accent to assist them in this process.  He then went on to do a bit of the following routine that begins at around 1 minute and 33 seconds in the video below:

He had the entire class taking part in an interactive experience repeating the Spanish words with an exaggerated American accent. We were laughing non-stop for the entire class but at the same time he managed to dissect the essence of humor and the necessity of observation and truth. The truth can be painful but it can also be very funny at times. 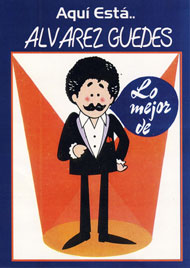 Lord, grant me the serenity

to accept the things I can not change,

the courage to change the things I can not accept,

and wisdom to dodge

all those who try to ruin my day

Grant me the peace of mind to listen

to every idiot who comes to talk to me,

of each crappy suggestion that they come up with,

and every creative way to screw me over.

Also, help me to take care

of those who I had to send to hell today

as these can be well connected

to the ass that I have to kiss tomorrow

And Lord, when having a bad day

and it appears that people have agreed to screw me over

help me to remember that it takes 42 muscles to smile,

and only four to extend my finger

and tell them to go to Hell.

Alvarez Guedes did use strong and sometimes foul language in his routine but it is language that many Cubans are extremely familiar with and with the horrible experience of the past century of totalitarianism a few bad words were not out of order and extremely funny. Let us remember this giant figure of Cuba and Miami who although a family man who quietly helped many in need; was always willing to poke fun at himself.

Guillermo Alvarez Guedes  is an icon of the Cuban exile quarter and is greatly missed.