"Freedom is indivisible and only fighting for it together can we conquer it. Freedom when it starts to disappear when it is most needed, and in Venezuela the lack of freedoms is a reality that affects millions of Venezuelans every day." -Leopoldo Lopez, May 1, 2014 Message to Workers 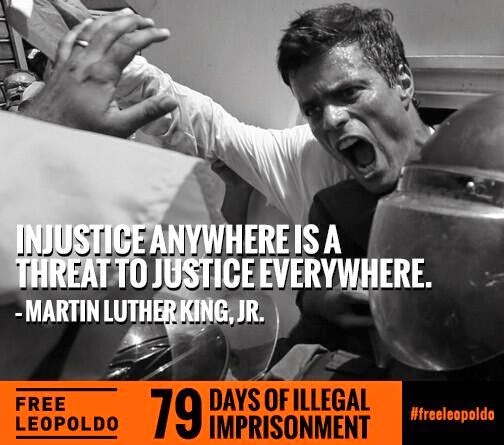 Over Leopoldo Lopez's twitter today the following message from this nonviolent opposition leader and prisoner of conscience was made public:


"Leopoldo arrived at courthouse. Hearing suspended by them. Now they are moving him back to Ramo Verde. Leopoldo before being transferred back to Ramo Verde was able to say a few words: "Today unjust justice hid itself. What does it fear? The truth? They know I should go free. I hope that will not delay Freedom of Simonovis. He should leave now! It is justice, he is not in good health."


Human Rights Watch has made the case that Leopoldo's detention is a judicial aberration, unfounded and the he should be free stating in their report:

López has been held in pretrial detention on a military base for more than two months despite the government’s failure to produce credible evidence that he committed any crime.

Below Human Rights Watch classifies the detention as a "judicial aberration" on May 5, 2014.