Berlin: Rosenstrasse and The Wall

Visiting Berlin in the year of the 25th anniversary that the Berlin Wall was finally torn down with a Cuban human rights icon is a once in a life time experience. Above is The Berlin Wall Memorial with the names, and in most cases the photographs of the 136 Germans killed trying to cross the Wall. In West Germany it was known as the "death strip." Estimates place the total number killed as greater than 200. The Wall began to be built by the communist East on August 13, 1961 and was finally torn down on November 9, 1989.

One of the last victims, Chris Gueffroy was born on June 21, 1968 and shot dead on February 5, 1989 trying to cross on the Britzer Zweigkanal, near the small garden colonies “Harmonie“ and “Sorgenfrei” on the sector border between Berlin-Treptow and Berlin-Neukölln. The Wall is a symbol of communist totalitarianism and control celebrated by tyrants such as Fidel Castro who visited there in1972 addressing the border guards and praising their "work."

Amidst the dark shadows of Nazi and Communist totalitarianism shines a powerful example of hope found in the example set by German housewives who using nonviolent means rescued their Jewish husbands who had been abducted in 1943 to be sent to the death camps. This led to a sustained civic action on Rosenstrasse Street. The book, A Force More Powerful, describes how these housewives frustrated the aims of Adolph Hitler’s Third Reich:


Word spread quickly about the abductions in Berlin, and before long a group of non-Jewish German women had gathered on the Rosenstrasse with food and other personal items for their Jewish husbands and children, whom they believed were being held inside. One of the women, Charlotte Israel, arrived and found 150 women already huddled outside. She asked one of the guards for her husband's potato ration cards, which he went to get. On the back of a card, her husband Julius wrote, "I'm fine." Other women began asking for personal effects to confirm that their husbands were inside and, soon after, began demanding their release. One woman's brother, a soldier on leave, approached an SS guard and said, "If my brother-in-law is not released, I will not return to the front." The crowds grew considerably despite the winter chill, and soon women waited outside day and night, holding hands, singing songs, and chanting "Let our husbands go!" By the second day of the protest, over 600 women were keeping a vigil on the Rosenstrasse.
This was not the first time many of these women had voiced dissent. For over a decade they and their families had challenged Nazi racial policies through letters and small demonstrations, insisting that the regime would be hurting fellow Germans by persecuting their Jewish spouses. Hitler and his circle had always tried to minimize unrest and avoid the kind of domestic opposition that German rightists saw as the "stab in the back" that had crippled the German effort during World War I. Until this point the regime had largely managed to keep the genocide against the Jews a secret. But when it affected a group who were unafraid to speak out against Nazi policies, that secrecy was jeopardized.
What gave further resonance to the wives' protest was that it was happening in the heart of Berlin, a city that had never been enthusiastic about Nazism. Cosmopolitan Berliners always saw it as a crude Bavarian aberration. Moreover, Berlin was the German base for foreign news organizations that still operated during the war. If political malcontents or the wire services were to get wind of the protest, the myth of the omnipotent Nazi state could be exposed. In fact, London radio did report on the demonstrations.
By the third day SS troops were given orders to train their guns on the crowd but to fire only warning shots. They did so numerous times, scattering the women to nearby alleyways. But the wives always returned and held their ground. They knew the soldiers would never fire directly at them because they were of German blood. Also, arresting or jailing any of the women would have been the rankest hypocrisy: According to Nazi theories, women were intellectually incapable of political action. So women dissenters were the last thing the Nazis wanted to have Germans hear about, and turning them into martyrs would have ruined the Nazis' self-considered image as the protector of motherhood.
The campaign soon expanded to include women and men who were not in mixed marriages. The ranks of protestors bulged to a thousand, with people chanting to let the prisoners go and taunting the SS soldiers. Joseph Goebbels, seeking to stop more from arriving, closed down the nearest streetcar station, but women walked the extra mile from another station to reach Rosenstrasse 2-4. By the end of the week Goebbels saw no alternative but to let the prisoners go. Some thirty-five Jewish male prisoners, who had already been sent to Auschwitz, were ordered to gather their belongings and board a passenger train back to Berlin.

My first stop in Berlin was to visit The Berlin Wall Memorial and pay my respects to those who died seeking freedom and those who in November of 1989 nonviolently tore down the wall. My final stop was to visit Memorial to the Rosenstraße Protest, the place were German housewives took a stand and saved their husbands. 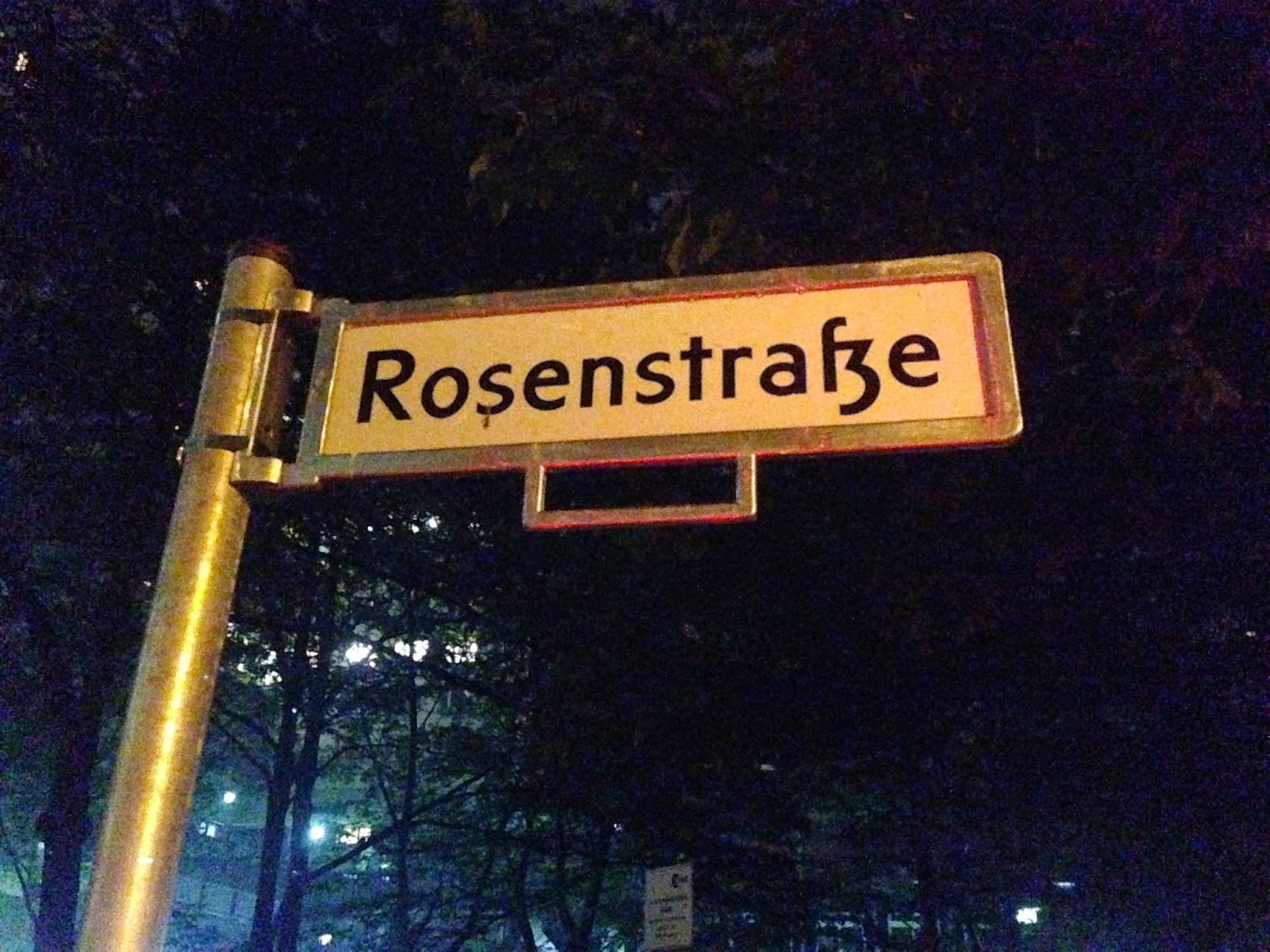 The power of nonviolence when properly applied with sound strategy forced the Nazi Third Reich to blink in 1943 and brought down a hated symbol of Communism in 1989.