The Ladies protest in the streets: Rosenstrasse 1943 & Fifth Avenue 2003 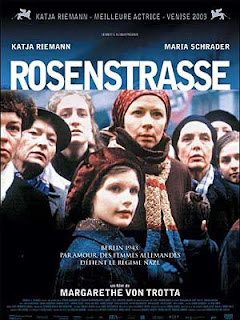 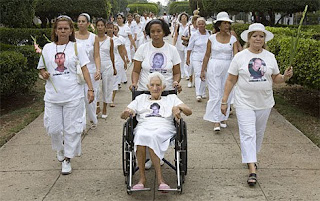 The power of nonviolent resistance is often overlooked by historians. International media are paying attention to the release of Cuban prisoners of conscience and analyzing the motives of the Cuban dictatorship and the role played by the Spanish Foreign Minister, the Cuban Cardinal, and others. One area that gets short shrift is the nonviolent dynamic.

Orlando Zapata Tamayo’s 83 day hunger strike and his death generated outrage around the world but the dictatorship is used to that. The July 13, 1994 massacre of 37 Cuban men, women, and children; the February 24, 1996 extrajudicial murder of four members of Brothers to the Rescue blown to bits by missiles fired from a Cuban MiG; and even the extrajudicial killing of Danish student Joachim Løvschall shot to death by an AK47 wielding soldier on March 29, 1997. All these were atrocities that generated international outrage led the regime to smear the victims and tried to shift blame. The same tactic was repeated with Orlando Zapata Tamayo.

The Ladies in White and their weekly marches defying the dictatorship’s restrictions on public demonstrations since 2003 and their decision to march for 7 days straight on the seventh anniversary of the March 18, 2003 crackdown led the regime to escalate its repression against them. Fascist mobs organized by the dictatorship brutalized them and with Cuban State Security dragged them away, but despite bruises and in some cases broken bones they continued to return each day for more. In the end international outrage, and apparently outrage from Cubans on the island led the regime to blink.

This is not the first time that a group of women have challenged a brutal dictatorship.

In 1943 the Nazi regime forced German women married to Jewish husbands to take radical action or lose them forever in death camps. The book, A Force More Powerful, describes how housewives frustrated the aims of Adolph Hitler’s Third Reich:

On February 27, 1943, SS soldiers and local Gestapo agents began seizing the Jews of Berlin in an operation called "the Final Roundup." They were loaded onto trucks and taken to the Jewish community's administration building at Rosenstrasse 2-4, in the heart of the city. The goal was finally to make the city judenfrei (free of Jews), necessitating the forcible collection of Jews with German spouses and their Mischling (mixed ancestry) children. For two years these Jews had escaped the jaws of the Holocaust because they or their German spouses were essential for the war effort, and the regime wanted no unpleasantness on the home front. But the stunning military defeat at Stalingrad earlier that month shattered German morale and led Hitler to call for "Total War," against Jews inside as well as Allied armies.1

Word spread quickly about the abductions in , and before long a group of non-Jewish German women had gathered on the Rosenstrasse with food and other personal items for their Jewish husbands and children, whom they believed were being held inside. One of the women, Charlotte Israel, arrived and found 150 women already huddled outside. She asked one of the guards for her husband's potato ration cards, which he went to get. On the back of a card, her husband Julius wrote, "I'm fine." Other women began asking for personal effects to confirm that their husbands were inside and, soon after, began demanding their release. One woman's brother, a soldier on leave, approached an SS guard and said, "If my brother-in-law is not released, I will not return to the front." The crowds grew considerably despite the winter chill, and soon women waited outside day and night, holding hands, singing songs, and chanting "Let our husbands go!" By the second day of the protest, over 600 women were keeping a vigil on the Rosenstrasse.

This was not the first time many of these women had voiced dissent. For over a decade they and their families had challenged Nazi racial policies through letters and small demonstrations, insisting that the regime would be hurting fellow Germans by persecuting their Jewish spouses. Hitler and his circle had always tried to minimize unrest and avoid the kind of domestic opposition that German rightists saw as the "stab in the back" that had crippled the German effort during World War I. Until this point the regime had largely managed to keep the genocide against the Jews a secret. But when it affected a group who were unafraid to speak out against Nazi policies, that secrecy was jeopardized.

What gave further resonance to the wives' protest was that it was happening in the heart of , a city that had never been enthusiastic about Nazism. Cosmopolitan Berliners always saw it as a crude Bavarian aberration. Moreover, was the German base for foreign news organizations that still operated during the war. If political malcontents or the wire services were to get wind of the protest, the myth of the omnipotent Nazi state could be exposed. In fact, radio did report on the demonstrations.

By the third day SS troops were given orders to train their guns on the crowd but to fire only warning shots. They did so numerous times, scattering the women to nearby alleyways. But the wives always returned and held their ground. They knew the soldiers would never fire directly at them because they were of German blood. Also, arresting or jailing any of the women would have been the rankest hypocrisy: According to Nazi theories, women were intellectually incapable of political action. So women dissenters were the last thing the Nazis wanted to have Germans hear about, and turning them into martyrs would have ruined the Nazis' self-considered image as the protector of motherhood.

The campaign soon expanded to include women and men who were not in mixed marriages. The ranks of protestors bulged to a thousand, with people chanting to let the prisoners go and taunting the SS soldiers. Joseph Goebbels, seeking to stop more from arriving, closed down the nearest streetcar station, but women walked the extra mile from another station to reach Rosenstrasse 2-4. By the end of the week Goebbels saw no alternative but to let the prisoners go. Some thirty-five Jewish male prisoners, who had already been sent to Auschwitz, were ordered to gather their belongings and board a passenger train back to .

Without fully realizing what they had done, the Rosenstrasse women had forced the Nazis to make a choice: They could accede to a limited demand and pay a finite cost - 1,700 prisoners set free, if all the intermarried Jewish men were released. Or they could open a Pandora's box of heightened protest in the center of the capital and brutalize German women in the bargain. For the Nazis, maintaining social control was more important than making sure every last Jew made it to the gas chambers. The regime that terrorized the rest of found itself unable to use violence against a challenge on its very doorstep. The Nazis were savage but they were not stupid.

Sixty years and a few days later on March 18, 2003 the Castro regime began a crackdown in which 75 activists were rounded up, their homes searched, then summary trials and long prison sentences ranging up to 28 years in prison for exercising their fundamental human rights in what became known as Cuba's Black Spring. Twelve days later on March 30, 2003 the Cuban Ladies in White attended church at the Santa Rita de Casia Church and walked down the middle of in , .

Over the next seven years despite all sorts of threats, harassment, and attempts to divide and destroy their movement these women continued to march, lobby, and protest their husbands, fathers, brothers, and sons imprisonment. After the death of Orlando Zapata Tamayo on February 23, 2010 and as the seventh anniversary of ’s Black Spring approached the Ladies in White announced that they would march for seven days demanding their imprisoned relatives’ freedom. The regime’s response was to organize mobs along with Cuban State Security to harass, intimidate, and physically brutalize them. Despite this each day the Ladies in White would gather and face the mobs and the physical assaults. In the midst of all this their chief spokesperson Laura Pollán responded to the regime’s brutality stating: “They can either kills us, put us in jail or release them. We will never stop marching no matter what happens.”

Five months later through the intercession of the Catholic Church the dictatorship responded by ending the mob attacks on the Ladies in White and announced that the men arrested in March of 2003 would all finally be released over the next 3 to 4 months. The persistence, courage and long term vision of these Cuban women led to a power dynamic where the regime was obligated to negotiate using the Catholic Church as a mediator to end this stand off.

Like the Nazis in 1943 the Cuban dictatorship in 2010 hopes that by meeting the Ladies in White’s demands [releasing the political prisoners] that they will stop marching, and go away. Time will tell, but the democratic opposition in , regardless of the outcome, should study the tactics and strategies of the Ladies in White over the past seven years look at what worked and did not work and apply it to future efforts in the struggle for a free and democratic .