The Umbrella movement was officially launched at 1.45am on Sunday, September 28, 2014 because Mainland China is not honoring its treaty obligations regarding Hong Kong maintaining its democratic system. International actions in solidarity with the Hong Kong demonstrators have been taking place. Mercedes Mack of the Metta Center offers context to this current round of protests in the article: Not Just Umbrellas. The Hong Kong Federation of Students and Scholarism published an open letter today on "Hong Kong People's Well Being" that is reproduced below. 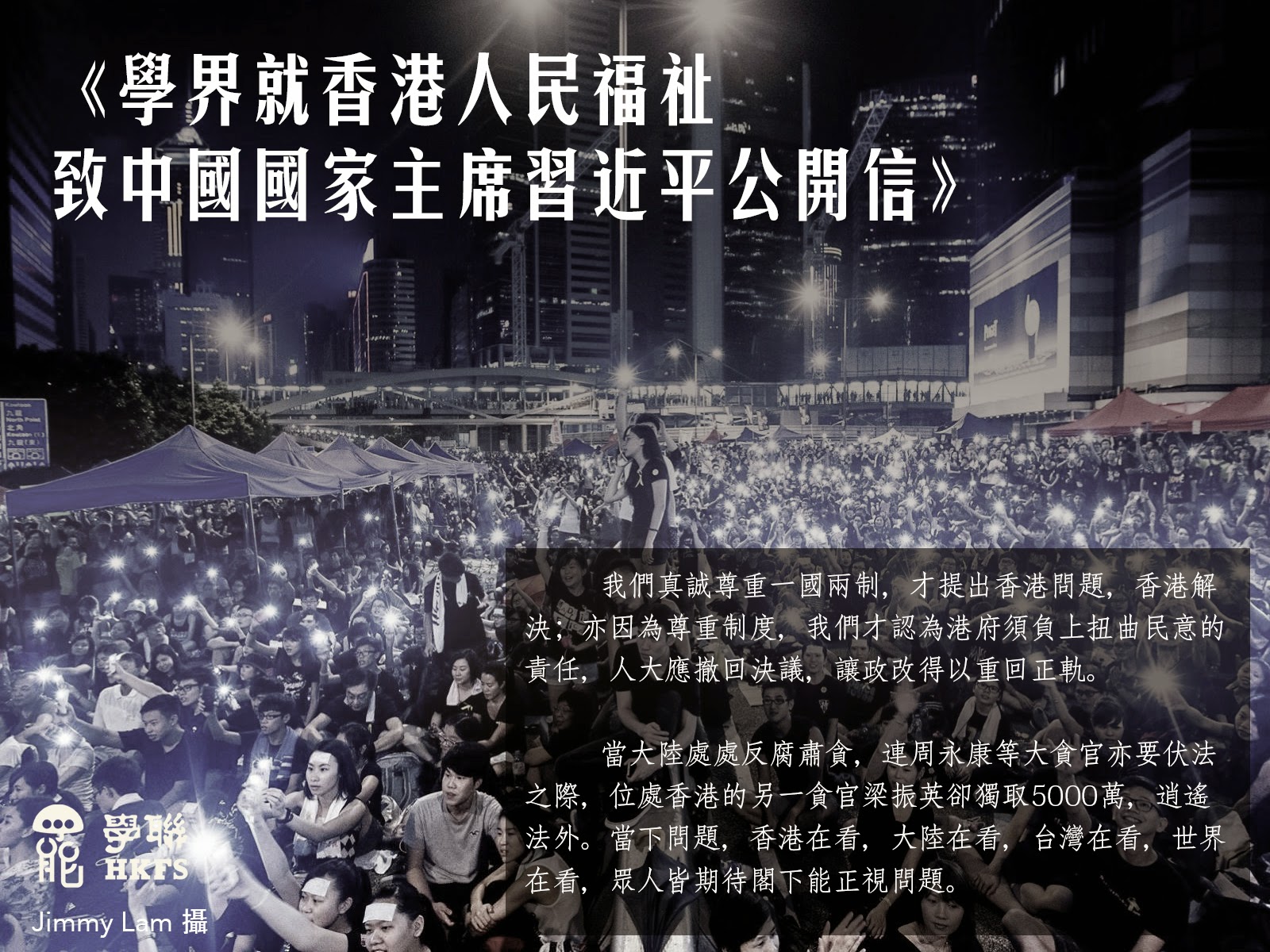 According to the International Monetary Fund, China will soon become the world’s greatest economy. For many, they will take pride in this extraordinary economic success of China. You proclaimed to pursue “The China dream” – the dream of all people, which shall therefore be realized by the people, and for the people. We presume you would agree that real accomplishment can only be achieved from a bottom-up approach by the people. Now, Hong Kong people have made clear that the same dream for the previous 30 years: the implementation of genuine universal suffrage and the establishment of a system which respects equal rights and guards the well-being of Hong Kong people in the generations to come.

You once said, “We shall always listen to the people, respond to their expectations and ensure equal rights of participation and development, so as to maintain social justice.” Don’t Hong Kong people’s persistence for an equal system echoes with your thought? Hong Kong people’s  proposal of the abolition of Functional Constituencies and Civil Nomination within the Chief Executive electoral framework or the nominating committee aims at guaranteeing equal participation and rights, with a view to achieve an equal development and protect social fairness and justice.

Sadly, at this very moment, our Chief Executive Leung Chun-ying is acting exactly contrary to your vision. 700 thousand Hong Kong people vowed explicitly their support for the practice of civil nomination as the direction of political reform. Nevertheless, Leung’s report to NPCSC failed to account faithfully Hong Kong people’s wishes. It is an outrage to witness how he manipulated our view to “Hong Kong people’s disagreement with the Legislative Council reform and abolition of the functional constituencies”. It is a complete disregard of public opinion and denial to Hong Kong people’s expectation. The framework of the political reform issued by the NPCSC is a result of the government’s untrue report. If the Hong Kong government had been honest about public opinion, they would have confessed to their fault, rectify and, most importantly, include Hong Kong people’s genuine wishes in the direction of electoral reform. In mainland China, voters can nominate their local governments. Civil nomination, therefore, has its legal ground. There can be no reasons for the Hong Kong government to fear practicing civil nomination.

It is an agreed fact that the current Chief Executive election system is not capable of bettering Hong Kong any further. While anti-corruption campaigns are under way in mainland China, CY Leung, who has been keeping $50M in secrecy, remains unfettered. There will only be more citizens, disillusioned with our corrupted institutions, marching and protesting, as long as no genuine democracy is practiced in this place. It is our profound hope that none of our future generations shall repeat our path, but enjoy genuine freedom and democracy, and pursue their dreams.

The occupy movement today at Hong Kong is definitely not a colour revolution or its alike, but rather a movement for democracy. The class boycott initiated by students and occupy movements across the city are our response to CY’s aversion towards public opinions. We demonstrated peacefully, but were confronted by violence; we howled, but were made silent by pepper spray and full-geared police. Yet the choking gas lingered in Central could not scare the citizens, but only triggered more to stand against this unscrupulous government and affirm justice. A genuine universal suffrage should never be drawn equivalent as subversion. It rather serves to exhibit the high degree of autonomy embodied in Basic Law. National defence and diplomatic matters have always been administered by the Central Government. If the Central Government is confident of her governance, she need not be fearful of a Chief Executive elected by Hong Kong citizens. Genuine universal suffrage will only reaffirm such autonomy and be another exemplar of yours.

Our respect towards the principle of “One Country, Two Systems” is the precise reason to put forward that Hong Kong shall resolve Hong Kong’s problems and citizens’ opinion must be given heavy weight. This is precisely the reason why HKSAR government should be guilty of misunderstanding us, and shall help to rectify the political reform by urging NPC to withdraw her decision. The current situation catches attention not only from Hong Kong, but also China, Taiwan and even the rest of the world. We have high hope for you to take this matter closely. It is by no means worthy letting a corrupted official jeopardizes “One Country Two System” and blemish the grand “China Dream”.

For the sake of a democratic political system, fellow students are willing to give up their studies or even risk their lives. Only at this moment can we realise how disgraceful our city is and how terrifying she has been suppressing us. It is only when a generation is sacrificing all of their time and efforts on street protest can we notice how CY Leung has antagonised this very generation. Some twenty or thirty years later, students fighting for democracy today will then become the pillars of the city. As 2047 approaches, any decisions today will cast a significant influence in our pathway towards democracy. We believe that nobody is eager to see his succeeding generation bet their lives for democracy and a better Hong Kong.

We, as students, urge to settle these issues of Hong Kong:

1) The HKSAR government must bear the sole responsibility, be accountable to Hong Kong citizens and rectify herself

2) To establish a democratic system that affirms equal rights

3) To uphold the principle of “One Country, Two Systems”: Hong Kong problems be settled in Hong Kong; Politics to be settled by Politics