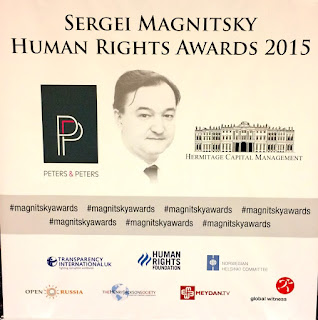 Six years ago a courageous Russian auditor was murdered after exposing a network of massive corruption in Russia. Those responsible for his killing remain at large as does the call for justice. His name was Sergei Magnitsky and he was 37 years old at the time of his death and a father of two.  This blog has highlighted his case before and an important piece of legislation that should be passed that bears his name, the Global Magnitsky Act, that would hold rights abusers accountable. The sixth anniversary of his passing is being marked with the establishment of the Sergei Magnitsky Human Rights Awards. The hashtag over social media for the event is the #MagnitskyAwards. Below is a documentary that reports what happened.