Breaking through the regime sanctioned narrative
The human rights situation in Cuba continues to deteriorate. This past weekend over 150 nonviolent activists were arrested for trying to exercise their rights. Cuban human rights defenders reported 1,093 arbitrary detentions in the month of October 2015. There are also new cases of activists, arbitrarily detained and held for months in prison. They have been threatened with political show trials. The regime in Cuba remains a totalitarian, communist dictatorship that visits violence upon nonviolent dissidents.

UNPACU members, Zaqueo Baez Guerrero, Ismael Bonet Rene and Lady in White Maria Josefa Acón Sardiñas, were arbitrarily detained on September 20, 2015 for wanting Pope Francis, the foreign press, and through this, the world, to know that in Cuba there are political prisoners who survive in subhuman conditions, that the dictatorship in the island tramples the rights and fundamental freedoms of human beings, and that the repressive forces beat nonviolent women and men who want a fair, democratic and prosperous Cuba. The dictatorship in Cuba has also extra-judicially executed nonviolent opposition activists.

There continue to be new prisoners of conscience locked up in Cuba. On October 22, 2015 twenty activists nonviolently protested in Havana before the prosecutor's office demanding the release of Zaqueo Baez, Ismael Bonet and Maria Josefa. Now Hugo Damián Prieto Blanco and Wilberto Parada Milán have been taken and jailed.

Artists remain jailed in Cuba for their words. On January 28, 2015, the rapper Maikel Castillo Pérez  stage name, El Dkano - Maikel Oksobo, was sentenced to a year in prison in Havana. He was targeted for having used music to express his dissenting political opinions. El Dkano was sentenced under a charge known as ‘peligrosidad predelictiva’ (‘dangerousness that is likely leading to a crime’), which is used to imprison dissidents for long terms. The 31-year-old’s lyrics are known for criticizing the Castro regime. He once described his style as that of someone who “doesn’t make concessions with a system full of liars.” 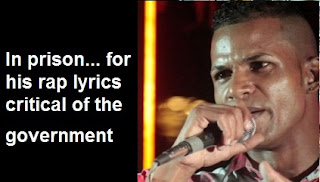 Beyond the strictly political there is also the use of Cuban workers and professionals in slave like conditions to enrich the Castro regime to the tune of billions of dollars.

Tony Díaz Sánchez is a Cuban opposition leader who become a prisoner of conscience in March of 2003 and spent the next seven plus years unjustly imprisoned in Cuba. He is not allowed to return to Cuba by the Castro regime. Over Facebook he made the following contribution to the debate on the Cuban Adjustment Act:


"There is an increasing exodus from Cuba, an exodus whose cause is neither the existence nor the possible elimination of the Cuban Adjustment Act. An exodus that is a consequence of the lack of rights and freedoms suffered by the Cuban people. For many, it is easier to ask for the removal of the Cuban Adjustment Act than to ask for the end of the repressive police state, and the misery established by tyranny, for many it is more logical to visit than to condemn them. It makes more sense to negotiate than demand, more logical be their partner than to be their adversary. For that reason, by mere hypocrisy and petty interests that they blame the Adjustment Act for the increase in the arrival of Cubans. They may eliminate the law and put an end to this most comprehensive and humane act of solidarity, of the great American nation. What they will not do is to try to end the regime that made necessary the Act and therefore Cubans will continue leaving and fleeing Cuba to the Diaspora . Yes to the Cuban Adjustment Act."

Unfortunately, all indications are that the Obama Administration's Cuba policy of normalizing relations with an abnormal regime is entrenching the worse elements of the dictatorship.

For example, US Deputy Secretary of Homeland Security Alejandro Mayorkas visited Cuba and held talks on October 28, 2015 with the Castro dictatorship’s recently named Interior Minister, Major General Carlos Fernandez Gondin, who has a record as a particularly brutal regime official with the nickname "Fairy Godmother" because "he loves to make numbers out of names and turn people into a national security issue." 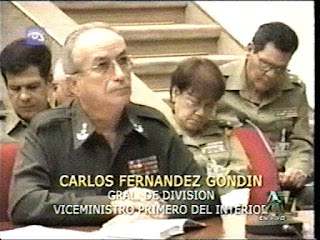 The exodus of Cubans will continue because they are fleeing from a repressive and exploitative dictatorship. The Obama administration's Cuba policy like Clinton's and Carter's in the past, embracing the dictatorship at the expense of Cubans and their human rights, is what drives Cubans to despair and flee the island because they perceive that it will extend the life of the dictatorship.
Posted by John Suarez at 1:22 AM