"Human rights are universal and indivisible. Human freedom is also indivisible: if it is denied to anyone in the world, it is therefore denied, indirectly, to all people. This is why we cannot remain silent in the face of evil or violence; silence merely encourages them." - Vaclav Havel 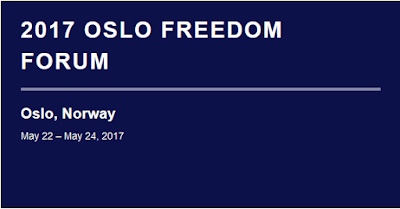 The ninth edition of the Oslo Freedom Forum has been underway since May 22, 2017 and tomorrow on the last day the organizers will be presenting the 2017 Václav Havel International Prize for Creative Dissent at 10:00am CET the Oslo Nye Theater. Be sure to catch it live streamed below:


Human rights have been in retreat around the world over the past two decades and activists from around the globe need  to network, exchange information, and better coordinate joint actions and strategies to turn the tide.

Nevertheless, this requires questioning assumptions and the course taken over the past twenty five years in the human rights community.

Gatherings such as the Oslo Freedom Forum, Forum 2000 in Prague and the Geneva Summit for Human Rights are forums where this important conversation can and should take place.

This blog has served as a platform to discuss the crisis and possible solutions. It has also called on conservatives to recall their own roll in the development of the idea and language of human rights centuries before the French Revolution of 1789, its roots not in the Enlightenment but in the Roman Catholic Church of the Middle Ages, and the first recognition of universal human rights in the 15th century in the Salamanca school.

Let us take the long view back to inform the conversation on the present situation and future prospects.