Black Ribbon Day 2017: Remembering some of the new victims of Communist and Nazi totalitarianism 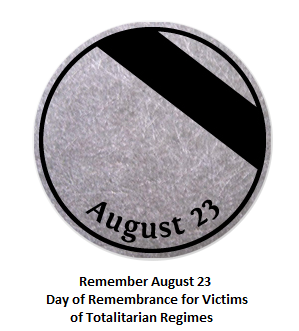 78 years ago on August 23, 1939 Josef Stalin and Adolph Hitler signed a treaty that was called a non-aggression treaty but it had a secret additional protocol that divided up Eastern Europe. It was a an aggression treaty were Nazi Germany and Soviet Russia plotted against their neighbors leading to the outbreak of WW2 on September 1, 1939 when Poland was invaded and occupied.

Today in Europe, Canada and the United States many observe Black Ribbon Day in remembrance for victims of totalitarian regimes. Sadly, this body count continues to rise in 2017. Even in democracies totalitarian movements attempt to sow chaos and try to destabilize and undermine free societies.

Germany recognizes the evil of the Nazi regime and has sought to pursue reconciliation through truth, memory, and justice. Sadly, in Russia today the Putin regime has backtracked and denied Soviet complicity with the Nazis in the start of WW2. This is dangerous because communist regimes continue to ally with fascist regimes and engage in systemic racism when it suits them.

Neo-Nazis are not in power at the national level but their movements wreak havoc around the world. Communists remain in power in 2017 in China, Vietnam, North Korea, Laos, Cuba, and in Venezuela with a rising body count of victims.

Last week I heard the heart breaking testimony of Susan Bro whose daughter Heather Heyer, age 32, was run over and murdered by a white supremacist on August 12, 2017 in Charlottesville, Virginia while 19 others were badly in the attack.

Earlier today I listened to the heart breaking testimony of Venezuelan exile Maria Eugenia Tovar whose daughter Génesis Carmona, age 22, was shot in the head and killed in Venezuela in 2014 by the Maduro regime and talked about her loss.


In light of events over the past few months more citizens of good will should organize events on Black Ribbon Day, write letters to the editor, and opinion pieces reminding the world of the need to remember what happened on August 23, 1939 and to denounce totalitarianism of all stripes. I hope that next year there will be a high profile Black Ribbon Day event in Miami.