For freedom in Venezuela and in Cuba: Non-violence is solidarity in action

"The tragedy was not the clamor of the bad people, but the silence of the good people." - Martin Luther King Jr.

Twenty three years ago hundreds of Cubans took to the streets of Havana chanting freedom and called for the end of the Castro regime. The Clinton Administration had by that time begun to reach out to the Castro regime and push for a normalization of relations with Cuba. This was at a time when many thought the Cuban dictatorship was on its last legs. Despite the shoot down of two U.S. based planes over international airspace on February 24, 1996 killing three U.S. citizens and one resident by 2000 President Clinton had shaken hands with Fidel Castro and opened cash and carry trade with the Cuban dictatorship.

Twenty three years later we gathered in Miami united for liberty in Venezuela. The Castro regime following years of engagement with President Clinton and President Obama has increased its influence throughout the Western Hemisphere. The OAS Secretary Luis Almagro testified that there are 15,000 Cubans in Venezuela acting as an occupying force.  Venezuela in 2017 faces the real possibility of completing its transformation into Cuba 2.0 thanks to the indifference and collaboration of its neighbors, including the United States under the previous Administration. Over a 100 Venezuelans have been shot and killed by the Maduro regime's repressive apparatus over the past four months of protests.

The time for petitions and conflict resolution are over in both Cuba and Venezuela. 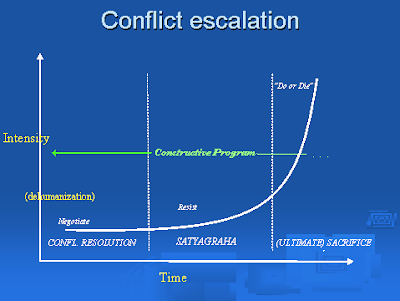 The struggle in Cuba has been going on for more than 58 years and Venezuela's now for 18 years.  While reading Michael N. Nagler's book, "The Nonviolence Handbook: A Guide for Practical Action" read a passage that struck me with regards to the struggles now taking place in these two countries:

"Conflicts escalate when they are not resolved, and if they are left untended they can rapidly get out of control." From the nonviolence point of view, the intensity of a conflict is not necessarily a question of how many guns or how many people are involved (the same metric would work for a quarrel between lovers as between nations); it is primarily about how far dehumanization has proceeded. If someone no longer listens to you, is calling you names or is labeling you, it’s probably too late for petitions. In terms of knowing how to respond, we can conveniently think of this escalation in three stages that call for distinct sets of responses. Let’s call these three stages Conflict Resolution, Satyagraha (active nonviolent resistance), and—hopefully this is rare, but it helps to know it exists—Ultimate Sacrifice (see Figure)."

In both countries the regimes in power call those who oppose them: worms, and fascists. In the recent past sectors of the political opposition in Venezuela sat down to dialogue with a government whose leadership rejects the legitimacy of the opposition but used the process for tactical purposes to slow the imposition of international sanctions while they continue to engage in systematic human rights violations. In Cuba, the opposition is not only not recognized but is also illegal. In Venezuela the purpose of the Constituent Assembly that was brought into existence on July 30, 2017 with escalating repression, including government snipers shooting unarmed demonstrators in the head, and tampering with voting machines in a massive fraud is to make the opposition illegal. This will turn Venezuela into a second Cuba.


Conflict resolution works if when you register a complaint the other side listens to you and although not sympathetic to you, recognizes your shared humanity. The next stage, active nonviolent resistance, is necessary when one can not reach one's adversary through reason, and involves taking on suffering: civil disobedience, strikes, standing up to physical abuse, and the full gamut of nonviolent tactics. Powerful elements within the Venezuelan resistance understand this and have put it into practice. Over social media the work of Gene Sharp is summarized in 140 characters: "Civil disobedience is an attitude that must be taken personally. By reducing support to the factors of power, these weaken and fall" and translated to Spanish along with more detailed images.

Unfortunately, the time for conflict resolution in both countries has long passed and in the case of Venezuela the democratic resistance is engaged in Satyagraha via mass demonstrations and many young people are also risking their lives continuing to march and protest the abuses and failures of the Maduro regime.

In Cuba there has been a nonviolent opposition that for decades has engaged in projects and campaigns: both constructive and resisting the regime paying a high price and risking all. These oppressive regimes thrive on violence and hatred and seek to provoke it in both their supporters and opponents in a spiral of dehumanization that entrenches an unjust and exploitative system with deep structural violence.

The failure of the international community to address these profound injustices effectively now threaten to engulf and destabilize the entire region.  Unfortunately this means that both in the Cuban and Venezuelan scenarios the conflict has escalated to the level of "ultimate sacrifice." We are witnessing nonviolent activists murdered by both regimes in an international environment that for too many years allowed them to do so with impunity. In Venezuela over the past

Nevertheless those of us living abroad must protest and show our solidarity for those who continue to carry on the struggle in Cuba, Venezuela and other countries going through this type of struggle. This is why we gathered today at the Torch of Friendship with our Venezuelan brothers and sisters engaged in an existential struggle for the future of their homeland. Our prayers are with them.