Nicaragua 2018: Daniel Ortega with help from Venezuelans and Cubans has killed 350 Nicaraguans and tortured many more

"Castro copied his recipe for repression and harassment in Venezuela, and now they are doing it in Nicaragua. There are many people who, while being tortured, heard the accents of Venezuela and Cuba in the clandestine prisons.” - Víctor Cuadras, Nicaraguan student leader, July 13, 2018 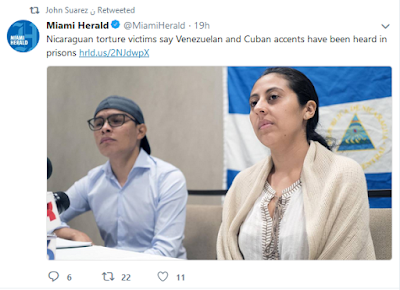 The Sandinista regime in Nicaragua led by Daniel Ortega is engaged in a campaign of extrajudicial killings to hang on to power. 350 Nicaraguans have been killed, 169 disappeared and 3,000 have been wounded by police agents since the protests began on April 18th reports Nicaraguan student leader Victor Cuardas. At least 20 people were killed on July 8, the Economist reported, and reports of new killings flood social media every day.

These are the bullets that the Nicaraguan government forces are firing at the students inside the church. pic.twitter.com/QZbPmgssiS
— Joshua Partlow (@partlowj) July 14, 2018

However one aspect that is not being widely reported is that Nicaraguan torture victims have reported hearing Venezuelan and Cuban accents in the regime's secret prisons. The Miami Herald quoted Nicaraguan student leader Victor Cuadras on July 13, 2018:


“Castro copied his recipe for repression and harassment in Venezuela, and now they are doing it in Nicaragua. There are many people who, while being tortured, heard the accents of Venezuela and Cuba in the clandestine prisons.”

Victor is right to cite Venezuela. Beginning in February of 2014 the high profile torture and killing of Venezuelan student opposition activists were carried out to terrorize the student pro-democracy movement. Reports in the media at the time described individuals with Cuban accents involved in the brutality. Protests erupted in Venezuela with Cuban flags being burned while denouncing the Castro regime’s role in the repression. The pattern is being repeated today in Nicaragua.

It now appears that Venezuelans, trained by the Cubans, are joining their Havana counterparts in the torture and killing in Nicaragua to preserve the communist revolutionary project in the Central American country. Venezuelans are starving in large numbers, and despite the economic implosion and political crisis continues to sending subsidized oil to Cuba.

Few are talking about this as the situation in the Western hemisphere worsens.

Early on in the crackdown against protesters there was also a crackdown on news media and one of the early victims was a reporter shot in the head while reporting the news over Facebook. This is an attempt to implant terror to silence dissenting voices and those who would report on what is going on. In Nicaragua, so far, it has not worked as planned and the killings, torture, and state terrorism continue.


The images and the reporting continue to emerge. Follow freelance journalist Ismael Lopez who is risking all to report what is happening on the ground in Nicaragua. As was the case in Venezuela, students are being shot in the head by snipers. Joshua Partlow of The Washington Post , who was also trapped there, reported on students, journalists, and priests trapped in a Church surrounded by pro-government militias firing heavy caliber bullets.

“The pain is unbearable” says this medical student who was shot through the leg today and left on the ground for hours in the church because police wouldn’t let ambulances in to carry out wounded. pic.twitter.com/aSJLzKEg8c
— Joshua Partlow (@partlowj) July 14, 2018


Meanwhile in Mexico a left wing populist with strong ties to Havana, Cuba prepares to assume power on December 1, 2018. The Castro regime now feels empowered, believing that it will have a dramatically expanded economic lifeline from their ideological soulmate in the Presidential Palace in Los Pinos, Mexico City.