Debate over what motivates the Castro regime's drug smuggling

I love argument, I love debate. I don't expect anyone just to sit there and agree with me, that's not their job. - Margaret Thatcher  (1980)

Last night wrote about the Castro regime's decades long involvement in drug smuggling as part of an ideologically motivated agenda, but today was challenged by others with the thesis that the Cuban dictatorship's gun running and drug smuggling were done out of economic desperation due to the threat of economic collapse.

For the sake of brevity will highlight the most cogent argument on the matter and it was presented succinctly by Diana Álvarez Amell over twitter. ‏ She argued that "the pattern of the dictatorship in #Cuba -gun running and drug smuggling- when faced with economic collapse. The interesting question is why this is being publicized now."

The pattern of the dictatorship in #Cuba -gun running and drug smuggling- when faced with economic collapse. The interesting qquestion is why this is being publicized now. https://t.co/mUnvdoEU5f
— Diana Álvarez Amell (@alvaredi) May 21, 2019


My response was that "the Castro regime was heavily involved in drug running for decades, not just when facing economic collapse. It is part of the war against the decadent West." Professor Álvarez Amell responded that "That is to me an ideological red herring. It is about bare survival & staying in power, the rest, to paraphrase Oscar Wilde, "Don't use big words, they mean so little."

She had a point: "Don't use big words, they mean so little" - Oscar Wilde.." Followed up with a tweet that focused more on facts and less on SAT words and rhetoric.

History would say otherwise. Cuba was placed on the list of state terror sponsors in 1982 b/c the Cuban govt was using a narcotics ring to funnel both arms & cash to the Colombian M19 terrorist group then battling to overthrow Colombia’s democratic govt. https://t.co/F4NcwcL5BZ
— John Suarez ن (@johnjsuarez) May 21, 2019


Professor Álvarez Amell rebutted that she saw things slightly differently, "Narco guerrilla is a self-serving way to support, while allowing the M19 to finance themselves & control the country side, & yet be beholden to Castro."

I would be inclined to agree, if this practice had started up as Soviet aide was drying up during the Gorbachev era. Until 1987 Soviet trade with Cuba had been increasing by 10% every year. The Castro regime's involvement in drug trafficking, gun smuggling, and international terrorism did not begin in the 1980s but in the early 1960s.

This is my rebuttal.

According to  the July 18, 1989 Heritage Foundation report, Castro's Show Trials Do Not Mean an End to Cuba's Drug Trade, the links to building narcotics networks to the United States stretch back to the earliest days of the dictatorship.


"Documented evidence of Cuba's role in drug trafficking dates back to the early 1960s. According to a Drug Enforcement Administration (DEA) intelligence report released in 1982, a meeting was held in Havana in 1961 between communist revolutionary Ernesto "Che" Guevara, Moises Crespo of the Cuban Secret Police, and future Chilean socialist president Salvador Allende, to.discuss creating a narcotics network to smuggle illegal drugs to the U.S."

This was at a time when Soviet aid to Cuba made the U.S. Embargo irrelevant to the Castro regime, and the purpose of sanctions was to increase the cost to the Soviet Union to operate in Latin America.

In April of 1986 in a now de-classified CIA intelligence assessment titled The Cuban-Soviet Connection: Costs, Benefits, and Directions reported the massive nature of Russian aid to Cuba:


“Soviet economic assistance to Cuba, for example, has averaged $4.5 billion annually since 1980, and is by far the most extensive Soviet aid program to any developing country.” ... “Soviet military aid, provided free of cost to Havana, amounts to more than $500 million per year and has transformed the Cuban military into one of the largest and best equipped forces in the Third World.”

This assessment by the Central Intelligence Agency (CIA) was also reflected in Fidel Castro's view of the embargo in 1985. When the Cuban dictator was asked what the impact of the US resuming trade relations with Cuba would be on the national economy Castro responded almost dismissively.


But, frankly speaking – I like frankness – economic relations with the United States would not imply any basic benefit for Cuba, no essential benefit. If trade relations with the U.S were renewed tomorrow, and if we were able to export our products to the United States, we would have to start making plans for new lines of production to be exported to the United States, because everything we are now producing and intend to produce in the next five years has already been sold on other markets. We would have to take them away from the other socialist countries in order to sell them back to the U.S., and the socialist countries pay us much better prices and have much better relations with us than does the United States. We export our citrus fruit, a large part of our sugar, a large part of our nickel, and other products to the other socialist countries, which not only pay us much higher prices and sell their products to us at lower prices, but also charge us much lower interest for credits and reschedule our debt for ten, fifteen, or twenty years without interest. In fact, what are we supposed to do? There's an old folk saying that goes, "Don't swap a cow for a goat!"

Not surprisingly the source, Fidel Castro: Nothing Can Stop the Course of History by Jeffrey M. Elliot and Mervyn M. Dymally (Pathfinder Press, 1986), cannot be found online, but on Amazon or in a library. This book was based in a question and answer interview of Fidel Castro published by Playboy Magazine.

Despite receiving massive and increasing Soviet subsidies between 1960 and 1987 the Castro regime engaged in massive arms smuggling and drug trafficking in the service of ideological objectives and as can be seen in Venezuela today in establishing a Cuban imperial presence in the hemisphere, and striking at the soft underbelly of the United States.  This would not be the first time that drug trafficking was carried out to advance imperial objectives. 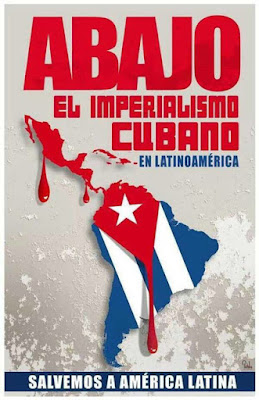