Xiomara de las Mercedes Cruz Miranda is a Cuban dissident. member of the Ladies in White, a mother, and a prisoner of conscience. She was arrested on April 16, 2016 for speaking out during a human rights demonstration in Havana's Central park. She was placed on parole in January of 2018. She was re-arrested in mid-September 2018 under the charge of being "threatening." On September 19, 2018 she was tried and sentenced to one year and four months in prison. She was sent to a prison 400 kilometers from her home. This was an added hardship for her family to visit her, and keep an eye on her well being.


Xiomara was sent to a punishment cell for at least 10 days for speaking to her daughter over the phone. Apparently, officials did not like the content of their conversation. 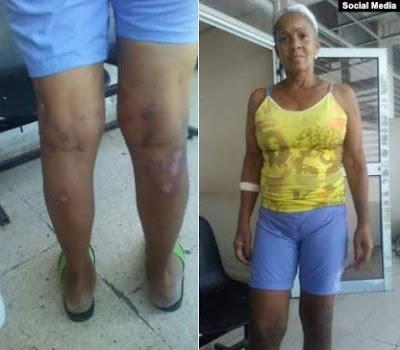 Over the course of one year in custody of the Castro dictatorship her health has radically declined. Above and below are photos of rashes that appeared on her body in June that Cuban medical doctors in Ciego de Ávila claimed to be unable to diagnose. In mid-July she was returned to Havana to La Covadonga hospital. 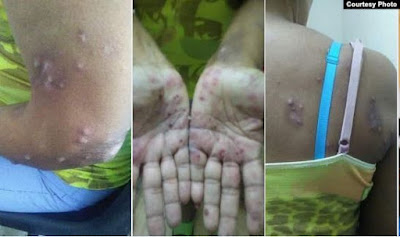 On August 8, 2019 she was transferred to intensive care. Cuban dissident Angel Juan Moya has posted videos of interviews from August 6th and August 7th with doctors at the hospital. Family members are complaining that they are receiving differing diagnosis and her situation continues to worsen. Xiomara is intensive care and now doctors are saying that it could be lung cancer. A doctor refuses to update the family saying: "that he did not want to see those people."


Their is cause for great concern. Xiomara's condition is deteriorating, and one of the doctors raised the issue of a "political" question.  Healthcare in Cuba has a history of being subordinated to political considerations. The health of the patient is not the top priority.

Xiomara de las Mercedes Cruz Miranda may become the second Lady in White to be a victim of purposeful medical neglect. The first was Laura Inés Pollán Toledo, founding leader of the Ladies in White, who was a victim of a sad, tragic and unnecessary death on October 14, 2011.

This practice of politically motivated medical negligence is not just limited to members of the Ladies in White. Two other examples separated by twenty years demonstrates that this is a long term regime tactic to deal with dissidents in a manner that rises to the level of cruel and unusual punishment.

On May 24, 2015 Sirley Avila Leon was the victim of a politically motivated machete attack carried out by Osmany Carriòn, with the complicit assistance of his wife, that led to the loss of her left hand, right upper arm nearly severed, and knees slashed into leaving her crippled. Following the attack Sirley did not receive adequate medical care and was told quietly by medical doctors in Cuba that if she wanted to get better that she would need to leave the country. She arrived in Miami on March 8, 2016 in a wheel chair unable to bend her legs, or close her remaining hand.

Sebastián Arcos Bergnes, a human rights defender and leader in the Cuban Committee for Human Rights, died from a case of purposeful medical neglect.

On January 13, 1992 the executive board of the Cuban Committee for Human Rights again issued a statement reaffirming their commitment to nonviolence and calling for dialogue with the Cuban government.

Sebastian Arcos Bergnes was detained on January 15, 1992 and charged with "enemy propaganda" and "inciting rebellion," he was sentenced to four years and eight months in prison. Sebastian was transferred to Ariza Prison in  Cienfuegos Province,  more than 130 miles from Havana, where he was imprisoned alongside dangerous criminals and systematically denied medical attention.

In 1993 the regime offered Sebastian a deal: He would be released immediately if he only agreed to leave the island for good. Sebastian rejected the deal, choosing prison in Cuba over freedom in exile.

After an international campaign that included his designation as an Amnesty International prisoner of conscience and a request by France Libertés, the organization founded by former French first lady Danielle Mitterrand, Sebastian Arcos was released in 1995.

A few weeks after his release, Arcos was diagnosed with a malignant tumor in the rectum, for which he had previously been denied medical care in prison. After a Cuban doctor was fired from his post for diagnosing Arcos, he traveled to Miami for further care. In 1996, Sebastián Arcos Bergnes testified before the UN Human Rights Commission in Geneva, Switzerland.


Sebastian died on December 22, 1997 from the cancer that could have been easily diagnosed much earlier, and saved his life.

The fear is that a similar process is being carried out against Xiomara de las Mercedes Cruz Miranda. The international community and people of good will need to make their voices heard.