The New York Times, the Castro regime, and Fake News

"The leader of pro-Castro opinion in the United States is Herbert L. Matthews , a member of the editorial staff of the New York Times. He did more than any other single man to bring Fidel Castro to power." - William F. Buckley Jr.,  Athwart History: Half a Century of Polemics, Animadversions, and Illuminations 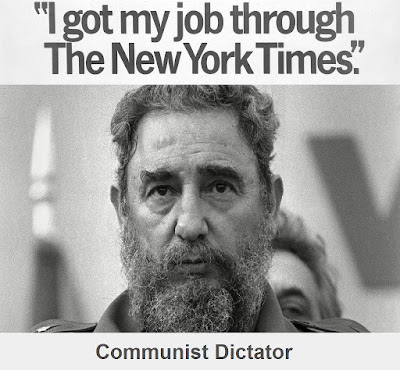 Yesterday, blogged about the latest example of The New York Times bending over backwards to present the Castro dictatorship in a positive light. However, it is important to provide some historical context.

Beginning in 1957 editorial staff member and journalist Herbert Matthews built up Fidel Castro's image both inside and outside of Cuba with a series of misleading articles in The New York Times. In July 1959 Matthews reported: "[t]his is not a Communist Revolution in any sense of the term. Fidel Castro is not only not a Communist, he is decidedly anti-Communist."

Anthony De Palma wrote an important book in 2006 on Herbert Matthews titled, "The Man Who Invented Fidel" that describes how Matthews's heroic portrayal of Fidel Castro influenced the fall of the Batista government and the consolidation of the future dictator as a national figure.

Fidel Castro's July 26th Movement successfully lobbied Washington to impose an arms embargo on the Batista regime on March 14, 1958, and the old dictator seeing that Washington was siding with Castro made the decision to abandon power on December 31, 1958.

William F. Buckley Jr. in an article in the March 1961 issue of The American Legion magazine outlined the impact of Mr. Matthews on the imposition of communism in Cuba and placed it in a larger context:

"The leader of pro-Castro opinion in the United States is Herbert L. Matthews , a member of the editorial staff of the New York Times. He did more than any other single man to bring Fidel Castro to power. It could be said - with a little license - that Matthews was to Castro what Owen Lattimore was to Red China, and that the New York Times was Matthews's Institute of Pacific Relations: stressing this important difference, that no one has publicly developed against Matthews anything like the evidence subsequently turned up against Lattimore tending to show, in the words of a Senate investigating committee, that Lattimore was 'a conscious, articulate instrument of the Soviet conspiracy.'"

This was not the first time that The New York Times had a journalist who covered up communist crimes or attempted to portray a communist regime in a positive light.

Nearly ninety years ago Walter Duranty, an employee of The New York Times assisted in covering up the crimes of Josef Stalin. He was the newspaper's man in Moscow, and he repeated Stalinist propaganda and downplayed the atrocities taking place there. Duranty received the Pulitzer Prize in 1932 and decades later the world finally learned that more than 10 million people had died in a genocide in the Ukraine, despite the efforts of the New York Times reporter covering it up. Although Stalin's surviving victims sought to have the prize revoked, the Pulitzer Prize board refused to do it.

Over the next six decades, with a few notable exceptions, The New York Times would continue the tradition established with Herbert Matthews of giving positive coverage to the Castro dictatorship regardless what the facts are on the ground.

When one wonders why less people trust journalists the growing phenomenon of fake news should be looked at as a factor. 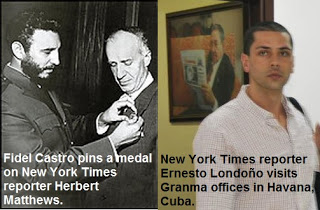