"I'd like to confess, at that moment I discovered that I really like killing." - Ernesto "Che" Guevara, in a letter to his father after executing an unarmed man. 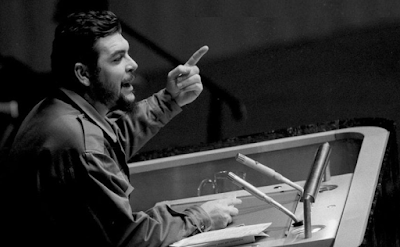 Yesterday marked the 55th anniversary of Ernesto “Che” Guevara’s 1964 address to the United Nations General Assembly in New York City. Telesur, today presented sanitized excerpts to promote their international agenda promoting socialism and communism.  Australian publisher Ocean Press also has a sanitized version of the speech translated to English that leaves out Guevara's reference to his adversaries as "worms" and that the firing squads were operating.

Guevara in his speech called out the Venezuelan government as murderers of students while failing to mention the pro-Castro elements in Caracas [in the autumn of 1960] that took the lives of 13 persons and injured 100 in an attempt to overthrow the social democracy led by Rómulo Betancourt. 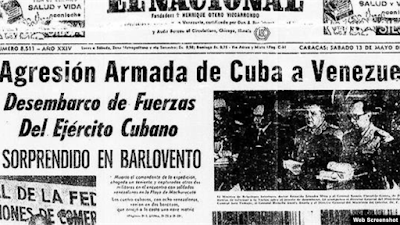 Nor did Guevara mention that Cuban Communist leader Blas Roca, told a Havana rally on January 23, 1963 that when the communists gained full control [in Venezuela] and “make themselves owners of the great riches in oil, aluminum and everything their earth imprisons, then all of America shall burn.”  A cache of three tons of weapons was found on a Venezuelan beach in November 1963 that was to be used to disrupt the democratic elections there.


On December 11, 1964, the Argentine guerilla gave an inflammatory speech at the United Nations General Assembly, attacking Western countries with a special focus on the United States and countries of Latin America. Several states took the floor to challenge him and exercise their right to reply.  Venezuela noted Che Guevara’s hypocrisy in slamming other countries given that “repressive measures, which include executions by a firing squad, that are continually carried out by the Cuban Government against its own people do not seem to wound his sensibility.” Guevara replied:


"The representative of Venezuela also used a moderate, though emphatic tone. He said that the accusations of genocide are vile and that it was really incredible that the Cuban Government care about these things in Venezuela with such repression against its own people. We must say here something that is a well-known truth and that we have always asserted before the whole world: executions? Yes, we have executed people; we are executing people and shall continue to execute people as long as it is necessary. We know what the result of a losing battle would be and the worms also have to know what the result of the lost battle is today in Cuba. In these conditions we live by the imposition of US imperialism."

Below we will highlight an excerpt from that speech and provide the historical context that raises some fundamental questions about this speech using language that dehumanizes the other (a first step on the road to genocide) and celebrates terrorists and assassins.

Don Pedro Albizu Campos led a series of coordinated armed actions called the Puerto Rican Nationalist Party Revolts in the 1950s for the independence of Puerto Rico that were carried out in Puerto Rico and Washington DC. Between 1950 and 1954 they killed one soldier, seven policemen, and wounded six soldiers and twenty-three policemen. The terrorists saw 16 of their own killed and nine wounded in these actions.

Two of the most high-profile actions, were the attempted assassination of a sitting U.S. President and the wounding of five congressman shot during a floor debate in the U.S. Capitol.

On March 1, 1954 four Puerto Rican Nationalists fired shots from the visitors' gallery in the House of Representatives of the United States Capitol during a floor debate, wounding five Congressmen, one seriously.


Now that the context has been provided. Here is what Mr. Guevara stated about this individual at his UN address on December 11, 1964:


“We express our solidarity to the people of Puerto Rico and their great leader, Pedro Albizu Campos, who, in another act of hypocrisy, has been released at age 72, almost unable to speak, paralyzed after having spent a lifetime in jail. Albizu Campos is a symbol of America still unredeemed but untamed. Years and years of prison, almost unbearable pressures in jail, mental torture, loneliness, total isolation from his people and his family, the insolence of the conqueror and its lackeys in the land where he was born; nothing broke his will. The delegation of Cuba, in the name of its people, pays a tribute of admiration and gratitude to a patriot who dignifies our America.”

The same degree of scrutiny should be observed when reviewing Che Guevara's other writings and speeches. The communist revolution in Cuba was built on carefully constructed lies. Guevara's objective was not to speak categorical truths, but to seize power. His political descendants today continue to have the same agenda: the violent overthrow of democracies and the imposition of totalitarian communist regimes.