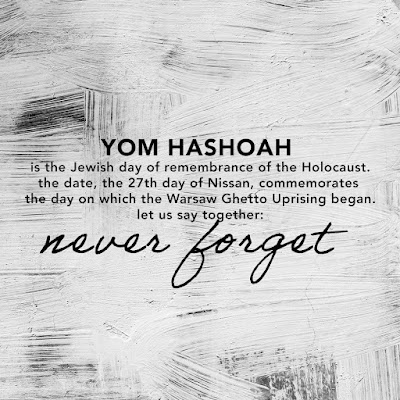 Never Forget
We must never forget what happened and remain vigilant now and in the future to battle against the mass destruction of innocent human beings.  News today with polls showing that new generations are ignorant of the Holocaust is deeply troubling. As Santayana observed, those who forget history are doomed to repeat it. This is why we must remember and say never again.

Memory comes in many forms.
Here on Twitter it is in your hands.
On #YomHaShoah we kindly ask you to amplify our voice.

One click can support our mission.
RT please. pic.twitter.com/t9nJKPAFe9

Never Again
Unfortunately the international community has failed more than once since 1945 to prevent another mass slaughter. Cambodia under the Khmer Rouge murdered between one fourth and one third of its population between 1975 and 1979, civil libertarian Nat Hentoff pointed to another genocide that could have been stopped in Rwanda in 1994, and witnessed in Syria in 2016 where religious minorities, including Christians were targeted. 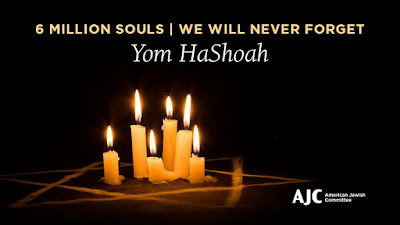 Today it is also important to remember that antisemitism is on the rise world wide and people of the Jewish faith need our solidarity and support in confronting rising hatred and intolerance to ensure that what Nazi Germany did never be repeated, and that there be no more Cambodias, Rwandas, and Syrias.

"What has my reaction been as a bystander to evil? What is my responsibility in turning the world into a place free of hatred & indifference? What can I do, to make it a better & safer place."

And then, start doing it.
Now. pic.twitter.com/aNIRMRVlQm