Cuban Freedom March Miami today August 22nd from 10am to 1pm: A reflection on its significance 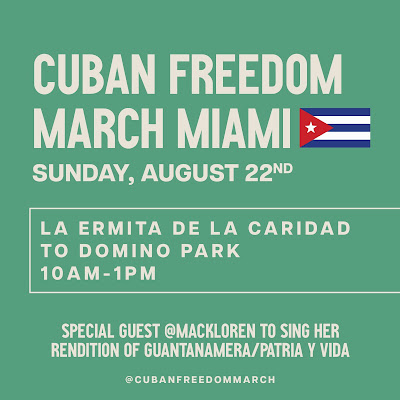 The Cuban Freedom March arrives in Miami, Florida today on August 22, 2021 with a march from la Ermita de la Caridad to Domino Park. The protest starts at 10:00am. Organizers have carried out successful marches in Washington DC, and Los Angeles.

On August 11, 2021 the leader of this movement, Alian Collazo, moderated a conversation on "what's really happening in Cuba" that is necessary viewing to listen to different perspectives, from young Cuban and Cuban American voices both inside and outside of Cuba.

This is a freedom movement led by young Cubans and Cuban Americans with a presence on social media on Instagram, Facebook, and Twitter.
This is a means to demonstrate continued support for human rights and freedom in Cuba through the nonviolent exercise of an important and fundamental right: peaceful assembly.

We cannot let the fire burn out. 62+ years of oppression ends NOW! We will not stop until a free Cuba!

The values expressed by this youth movement thus far are in agreement with the values expressed by the San Isidro Movement, the Patriotic Union of Cuba, the Ladies in White and the Liberation Christian Movement in Cuba.
The pro-democracy movement in Cuba is a nonviolent movement, and within the spectrum of nonviolent actions there are at least 198 identified by the nonviolence theoretician Gene Sharp.
These freedom marches fall under the category of processions by Professor Sharp. Marches are identified as the 38th of 198 identified nonviolent actions by Gene Sharp.
Strategic nonviolence takes a pragmatic approach that is based on being more effective then violence, especially when confronting brutal dictatorships, like the Castro regime. 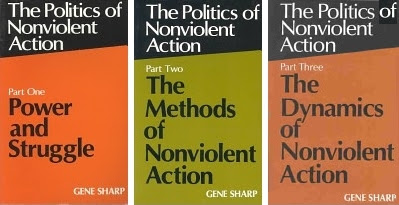 Non-violent resistance is an armed struggle but its weapons are not deployed to do violence or kill. These arms are  psychological, social, economic and political weapons.  Gene Sharp argues with much evidence "that this is ultimately more powerful against oppression, injustice and tyranny then violence. Historical studies are cited that demonstrate the higher success rates of nonviolent movements when compared against violent ones:

Therefore, if you want to help Cubans on the island than you owe it to them and to yourself to listen to them, review what they have done in the past, are doing today, the repression suffered, and learn as much as you can about the philosophy and strategy of nonviolence they have embraced for decades.

Beginning in the 1970s a nonviolent human rights movement emerged in the prisons and would win some battles against the dictatorship using grassroots civic resistance tactics and endure to the present day inspiring millions of Cubans on the island and around the world.

Transnational assistance to Cuban nonviolent activists have been measures of concrete solidarity with the Cuban people that draws howls from the dictatorship and their allies, but gratitude from most Cubans.

Below are some presentations, documentaries, and historic clips that can be of use as an introduction to nonviolence.
Many are also available in Spanish to circulate among Cubans on the island that until now have not been directly connected to the national civic resistance movement there.
Posted by John Suarez at 9:14 AM