"The only lost cause is one we give up on before we enter the struggle." - Václav Havel

Václav Havel was that rarest of statesmen, a great and good man. In his first New Year's Message in 1990 as President he addressed the country with a candor and truthfulness both rare and needed stating: "I assume you did not propose me for this office so that I, too, would lie to you."

Today, we observe the 82nd anniversary of his birth. The Czech play write, who became a dissident, defended artists, a prisoner of conscience, president of Czechoslovakia, resigned in protest over the Velvet Divorce, then president of the Czech republic and finally citizen and play write once again. All the while he demonstrated his solidarity with victims of repression in his own country and around the world.

This was done not out of a sense of optimism, but out of hope.  Consider for a moment how Havel responded to the invasion of his homeland.

In 1968, after Soviet tanks crushed the Prague Spring, an effort by Czechoslovak communist reformers to build socialism with a human face, Havel wrote the following to the Czechoslovak President Alexander Dubcek who had been one of the reformers later purged: "Even a purely moral act that has no hope of any immediate and visible political effect can gradually and indirectly, over time, gain in political significance."

Havel believed that moral actions, no matter how small or futile they may appear at the time can have profound consequences for both freedom and a just society. It is because the world is not a puzzle to be solved but incredibly much more complex that decisions of right and wrong made by each person have such great importance.


President Havel, in a November 11, 2009 address to the European Parliament in Brussels issued a challenge to the European Union and warned of the consequences of failure:

"Above all, clear and unequivocal solidarity with all those confronted by totalitarian or authoritarian regimes wherever they are in the world. And economic or other particular interests should not hinder such solidarity. Even a minor, discreet and well-intentioned compromise can have fatal consequences– even if only in the long term, or indirectly. One must not retreat in the face of evil, because it is in the nature of evil to take advantage of every concession. Besides, Europe has already had its own unfortunate experience of appeasement policies.

On the other hand he understood that living up to the challenge of unequivocal solidarity with those resisting totalitarian regimes would have unexpected positive consequences, not only in those countries living under dictatorship, but also lifting up the moral values of those true to themselves by practicing the values preached.


"Our support can help open-minded people or outspoken witnesses to the situation in North Korea, Burma, Iran, Tibet, Belarus, Cuba or anywhere else, much more than we think. But it will help us too. It will help us build a better world and also to be more true to ourselves; in other words, to put into practice the values that we proclaim in general terms."

At the same time, he did not link hope with success but rather the certainty that what one is doing is both good and coherent. In 1990 in the book, Disturbing the Peace, Havel explained how he viewed hope.

“Hope, in this deep and powerful sense, is not the same as joy that things are going well, or willingness to invest in enterprises that are obviously headed for early success, but rather an ability to work for something because it is good, not just because it stands a chance to succeed. The more unpromising the situation in which we demonstrate hope, the deeper that hope is. Hope is not the same thing as optimism. It is not the conviction that something will turn out well, but the certainty that something makes sense, regardless of how it turns out.

The fruits of his legacy can be seen in the work of Forum 2000, an annual gathering of politicians, philosophers, artists, scientists, and the public to reflect on important issues challenging civilization. The topic on the twentieth gathering of Forum 2000 was "The Courage to take Responsibility." In two days the 22nd gathering will focus on "Democracy: In need of a critical update?"  Václav Havel was born 82 years ago today and passed away seven years ago, but his legacy of good works live on. Take part in his legacy attending Forum 2000, in person if you are in Prague, or via social media and live stream video if you are elsewhere. 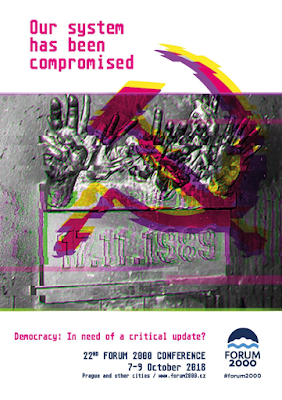