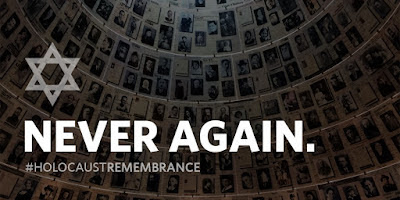 Today, January 27, 2022 is recognized by the United Nations as International Holocaust Remembrance Day and is observed around the world.

We must never forget what happened and remain vigilant now and in the future to battle against the mass destruction of innocent human beings.

One year and twenty one days ago on January 6, 2021 when the citadel of American democracy was laid siege by an angry mob that resulted in five deaths - Nazis where there in the crowd. Robert Keith Packer, age 56, was wearing a "Camp Auschwitz" t-shirt, making light of the notorious death camp. Auschwitz was the largest of the German Nazi concentration camps and extermination centers. Over 1.1 million men, women and children lost their lives there. 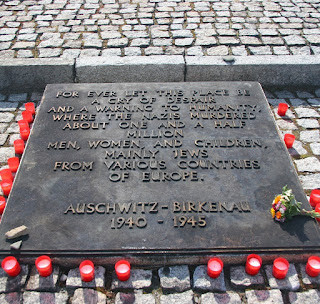 Primo Levi was right, it can happen anywhere - even here.

Unfortunately the international community has failed more than once since 1945 to prevent another mass slaughter. Cambodia under the Khmer Rouge murdered between one fourth and one third of its population between 1975 and 1979, civil libertarian Nat Hentoff pointed to another genocide that could have been stopped in Rwanda in 1994, and now we are witnessing another in Syria where religious minorities, including Christians are being targeted.
It is also important to remember that antisemitism is on the rise world wide and people of the Jewish faith need our solidarity and support in confronting rising hatred and intolerance to ensure that what Nazi Germany did never be repeated. 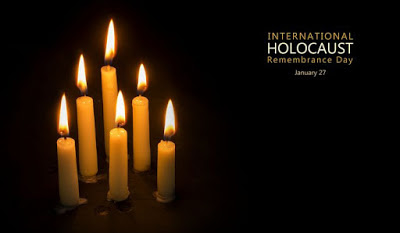 At the same time it is important to remember and honor the martyrs and heroes who resisted the Nazis.  Including Raoul Wallenberg, who saved 140,000 Jewish people, and was disappeared by the Soviets in January 1945. They are exemplars in moral courage that are much needed today.

In 2017 in the United States we saw Neo-Nazis on the march in Charlottesville, North Carolina first in a torchlight parade chanting anti-Semitic rants that the following day turned deadly in violent clashes that claimed an innocent life. We must remain vigilant and denounce this evil ideology wherever and whenever it arises. Four years later and Neo-Nazis were storming the U.S. Capitol threatening the peaceful transition of power in the United States.
The fragility of a free society was underscored during  the events in Washington D.C. on January 6, 2021, and the importance of resisting enemies of freedom both foreign and domestic.
This cannot be done by silencing free speech, even if it is hateful, but challenging it and exposing both its intellectual and moral bankruptcy.

"To forget the victims means to kill them a second time. So I couldn't prevent the first death. I surely must be capable of saving them from a second death." - Elie Wiesel
Posted by John Suarez at 1:11 AM