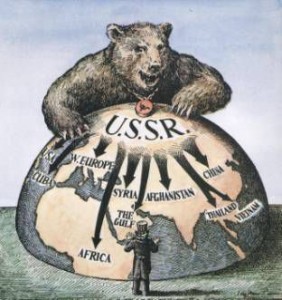 Modern Soviet and Russian imperialism
Cornell University's Legal Information Institute defines imperialism as "a doctrine, political strategy, practice, state policy, or advocacy that consists in extending power by territorial acquisition or by extending political and economic control outward over other areas. Imperialism oftentimes involves the use of military and economic power, and always aims for more expansion and collective or individual domination."
The Soviet Union expanded its empire into Central Europe in the aftermath of WW2, but its first large scale imperial expansion began in a diplomatic agreement signed with Nazi Germany on August 23, 1939 that divided up Poland and the rest of Eastern Europe into sphere's of influence by the two revolutionary regimes in the Molotov-Ribbentrop pact.
Despite the Soviet Union's early ideological antipathy to imperialism the revolutionary communist dictatorship began its own era of empire building between 1917 and 1921 with one of the first victims, Ukrainian independence.
Ukrainians were one of the first modern victims of famine politics. According to Felix Wemheuer, professor of Modern China Studies at the University of Cologne, in his book Famine Politics in Maoist China and the Soviet Union," during the twentieth century, 80 percent of all famine victims worldwide died in China and the Soviet Union."
The planned famine in Ukraine, known as the Holodomor, took place between 1932 -1933. Millions of children died in this artificial famine. This crime was ignored by the United States as it formally recognized the Soviet Union in 1933.  The Economist in 2012 reported on the 80th anniversary of this man-made famine:

Holodomor literally means death by hunger. In 1932 and 1933, a vast famine in Soviet Ukraine killed three to seven million people, according to estimates. While people starved, the grain was shut away in barns for export.

Social science research has demonstrated that famines "happen only with some degree of human complicity."  Human decisions "determine whether a crisis deteriorates into a full-blown famine." What took place in Ukraine was a Soviet genocide. Cubans would play a role in another genocide in Ethiopia in the 1980s.

Invasion and Occupation as described by Czech radio with images

Czechoslovakia, a Soviet satellite since 1948, had its Prague Spring in 1968, a moment when reformers in the government sought socialism with a human face and it was ended 54 years ago today with the arrival of Warsaw Pact tanks on Soviet leader Leonid Brezhnev's orders and the occupation that crushed the reformist initiative. Two days after the Soviet led Warsaw Pact invasion of Czechoslovakia on August 23, 1968 Fidel Castro publicly supported the invasion and occupation of the central European country.

Part of Castro's defense of the invasion and occupation of Czechoslovakia was that basic human rights standards such as freedom of expression were being re-established or in Castro's words:

"A series of slogans began to be put forward and in fact certain measures were taken such as the establishment of the bourgeois "freedom" of the press. This means that the counter-revolution and the exploiters, the very enemies of socialism, were granted the right to speak and write freely against socialism."

This led to Carlos Franqui, one of the early backers of Fidel Castro's July 26 movement and a leader of the Revolution to break with the regime in 1968 over Castro's support of the invasion.

Carlos Franqui's protest of conscience would lead him to then suffer a Stalinist erasure from Cuba's revolutionary history.
Josef Stalin had pioneered airbrushing colleagues who had fallen out of favor. Nikolai Yezhov ,a Stalin loyalist, had written the treatise that intellectually justified the need for purges in 1935 and became head of the Soviet secret police (NKVD) in 1936. He staunchly maintained that it was better for "ten innocent people to suffer than one enemy of the people to escape."
He presided over the execution of hundreds of thousands only to fall out of favor with Stalin in 1939 and disappeared, but unlike Franqui, not just in official photos and publications, he was never heard from again.In the picture below Nikolai Yezhov, appears next to Josef Stalin only to be airbrushed out in the picture directly below redone years later.
In the picture below Carlos Franqui appears on the right (in the middle of the picture) and is airbrushed out of the picture on the left.

Franqui wrote a short poem about being erased that is translated and reproduced below:
Four decades later Carlos Franqui would return to the Czech Republic which he had visited in 1960 to contrast what he characterized the slave society of 1960s and the free society of today.  He offered the following description of Prague in 1960 as he lived it:

The Prague I saw in 1960 under communism was a Prague with tense, dramatic people there were many police everywhere, gross corruption on the part of the regime. I came with a delegation of journalists and went to the hotel Jalta. There was a dance and there were very pretty young Czech girls ... Most of the journalists who were with me were good dancers and they began to dance. And they were very happy because they thought they were going to have an affair with these girls. But when the dance ended at midnight the girls told them that if they wanted to go with them that it would cost them the equivalent of thirty dollars. Then, as I was the treasurer of the delegation they came to borrow the money. I said I was sorry but could not justify it and they spent all night together with these girls. These girls told them that the police gave them apartments, and that they had to deliver foreign currency to the police chief the next day, that they had to ask the foreigners questions about politics, record and then deliver them . After that we went to the shops where only Tuzex could be purchased with foreign currency and actually saw official representatives doing the currency changes.

Contrasting with what he saw on his return to Prague in 2000:


I believe that slavery affects people in many ways. In countries where there is tyranny, where communism, normally people faces are tense, everybody is worried. It is difficult to find the relaxation, people simply smiling on the streets. And of course there were some great privileges among the Communist leaders, who lived as upper hierarchy, and people who had to work and obey. Now with what I have seen I have a different impression. It is clear that the heritage communism left is difficult to overcome because it is a legacy not only material but spiritual. Communism destroys the individual. And when the individual is free it is hard to recover the idea of being free. Under communism it is as if the state was the father of all the children. Then, to change that mentality is difficult but very important. A society can progress only through the efforts of all ... in all walks of life. [...] I think it was a country with a great industrial development, with a culture with certain traditions, which despite everything communism failed to destroy. I also think that having Václav Havel as a president has contributed mightily to create a balance, to solve serious problems like the thing with Slovakia in a peaceful and civil manner.

The Castro regime's claim of "anti-imperialism" proved hollow and history demonstrated that it was conditioned upon ideology. This was witnessed with the Castro regime’s support of the Soviet invasion of Czechoslovakia in 1968, its invasion of Afghanistan in 1979.
Carlos Franqui died exiled in Puerto Rico on April 16, 2010. Fidel Castro died in Cuba with his brother Raul wielding absolute power on November 25, 2016. The dictatorship in Cuba did not change, and the regime has proudly claimed to be a continuation of Fidel Castro's rule continuing a cult of personality of the dead communist despot.
The Castro regime has continued this practice to the present day with Russia's repeated aggression against its neighbors. Vladimir Putin's attacks against Georgia in 2008, Crimea in 2014 and the eight years long low intensity war in the Donbas region in Eastern Ukraine, and the February 24, 2022, multi-pronged Russian invasion of Ukraine were all imperialist acts of aggression in violation of international law.
Havana backed these imperialist ventures in 2008, 2014 and now in 2022. The Cuban dictatorship's foreign minister Bruno Rodriguez defended Putin's latest invasion of Ukraine claiming that Russia “has the right to defend itself."
Fifty four years later and the totalitarian temptation continues to threaten free nations through academic and cultural institutions on the one hand and an ascendant communist China, and authoritarian Russia on the other, but the legacy and writings of Vaclav Havel continue to be relevant and required reading to confront dictatorships around the world.
Posted by John Suarez at 7:38 PM