A Note to New Cuban Leaders in the Diaspora

“Strategy without tactics is the slowest route to victory. Tactics without strategy is the noise before defeat.” - Sun Tzu 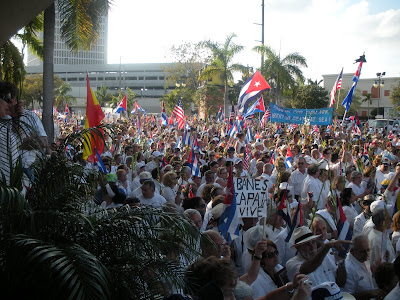 The past month, beginning with the death of Amnesty International prisoner of conscience Orlando Zapata Tamayo after more than 80 days on hunger strike (and the denial of water by prison authorities for more than two weeks) followed by the brutalization by agents of the dictatorship of the Ladies in White on the seventh anniversary of the Cuban Black Spring led to an international outcry denouncing the dictatorship, and apparently internal fissures within the regime disgusted over the dictatorship's actions.

The response by the Cuban diaspora, led by the likes of Gloria and Emilio Estefan, Andy Garcia, and Paquito D'Rivera shifting away from focusing on the Castro brothers to focusing on the Ladies in White, Cuba's prisoners of conscience, and the systematic denial of human rights in Cuba while, inviting everyone - not just Cubans - to join marches in support of the Ladies in White, calling for the freedom of Cuba's political prisoners, and demanding that Cubans have a right to their rights resonated with tens of thousands.

There are voices speaking of the end of the dictatorship . They are not necessarily wrong or right. There have been several times where the dictatorship has been on the ropes. The 1980 Mariel crisis began as mass demonstrations against the regime and the occupation of the Peruvian embassy only to end in a mass exodus to Miami by more than 125,000 Cubans. The fall of the Berlin Wall in 1989 and the end of the Soviet Union in 1991 was another moment of opportunity.

In the summer of 1994 social explosions in Cuba led to mass demonstrations in Havana and calls for freedom. In 2003 the dictatorship was on the defensive with the Varela Project, but with the start of the Iraq war carried out a massive crackdown and placed the opposition on the defensive, although it paid a heavy price internationally. This may be one of those moments of opportunity.

Nobel Peace Prize winner, Dissident leader, and first president of a free Poland Lech Walesa in Madrid, Spain on March 27, 2010 said that he found it incredible that Castro was not overthrown when the Berlin Wall fell producing transitions in Eastern Europe and the former Soviet Union stating "Cuban exiles in the exterior did not realize that they should have taken action at that moment and taken advantage of the opportunity" to which he added that for that reason the situation now is so difficult.

One could argue that 1989-1991 was one of several opportunities. At the time Cuban exiles were distrustful of the internal opposition then emerging and challenging the regime. It was another missed opportunity and a costly one.

The question to ask oneself now is what are you going to do now? It seems that every time there is a chance to obtain change two things happen. First, a lot of "leaders" seek to position themselves for the "inevitable transition" and there appears to be a lack of strategic vision. Cubans want to do something in reaction to the obvious injustices perpetrated but there is no plan with an endgame of how to achieve change. There is a focus on tactics and actions but not a long term vision.

You can't defeat an adversary who has a plan for remaining in power without your own plan for forcing them to change. The opposition both inside and outside of Cuba needs to be thinking and planning how to concretely obtain what it is demanding: freedom of all Cuban political prisoners, and an end to the systematic violation of the human rights of all Cubans by the dictatorship.

Ricardo Brown has an interesting essay on his blog arguing that if you want to be an effective protagonist for change in Cuba you have to be at the level of Cuba's founders and that both the Ladies in White and Orlando Zapata Tamayo are and where on that level of competence. He concludes by observing that the demonstration organized on Eighth street was also on that level.

Brown is right. The Ladies in White, despite beatings and repression, set out courageously to march for seven days straight and they did it despite some of them ending up in casts with fractures provided by government agents. They planned and executed an action with a concrete objective the freedom of there loved ones imprisoned since 2003 and all Amnesty International prisoners of conscience.

A special request to all the would be leaders out there: Less time chasing after the cameras and more time thinking about having a plan of action, and how to carry it out. More time thinking about how the regime and its agents attempt to manipulate the diaspora into making counterproductive statements or taking actions that are counterproductive. Seize the moment take well thought out action and obtain the freedom of Cuba's prisoners of conscience, and a Cuba where the human rights of all Cubans are respected.

The opposition in Cuba has achieved a consensus on the method of struggle and that is civic non-violent resistance to injustice. It is the path chosen by the Ladies in White, Dr. Oscar Elias Biscet, Jorge Garcia Perez Antunez, Normando Hernandez, Oswaldo Paya, Juan Carlos Gonzalez Leiva, and all sectors of the internal opposition. Miguel Sigler Amaya, at an FIU gathering, spoke about the importance of the nonviolent struggle and his belief that it is the method that will bring an end to the dictatorship. Brothers to the Rescue in the 1990s prepared an important publication on non-violent civic defiance. Please read it. It is also available in Spanish. Here is just one useful piece of information from that publication:

The key is to avoid being dragged into provocations to violence by the tyranny, that fears a nonviolent movement more than a violent action where it knows it has the advantage. Rushing into action and acting before the conditions are "ripe" should also be avoided to prevent the risk that the tyranny could crush the movement or inflict a serious drawback. The determination of the type of action must be based on the degree of power that the nonviolent movement has achieved. That is why planning and the continuous evaluation of the situation by the leaders in Cuba and in exile are crucial.

Visiting the website of the Albert Einstein Institute and reading all the essays and online books available there on nonviolent struggle and strategy would be a smart move for any new leader. This will prepare you with the tools to develop an effective plan for change, but remember Mohandas Gandhi's observation: They say, 'means are, after all, means'. I would say, 'means are, after all, everything'. As the means so the end.”

Learn from the mistakes and errors of the past while reading as much as possible on nonviolent strategies and tactics then putting them into concrete action.

Good luck and God bless you.
Posted by John Suarez at 12:37 AM