Seven Years after the Cuban Black Spring: A Reflection 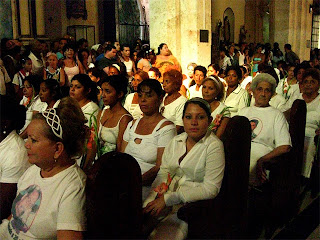 They can either kills us, put us in jail or release them. We will never stop marching no matter what happens. - Laura Pollán, Lady in White marching in

Seven years ago the news came by phone. A massive round up of Cuban civil society was underway. Independent journalists, human rights activists, and pro-democracy activists were detained their homes searched and ransacked. Independent libraries confiscated and the books burned. This is how the Cuban Black Spring began on March 18, 2003 on the eve of the invasion of . 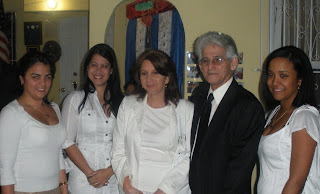 The crackdown coincided with the main session of the then United Nations Human Rights Commission in Geneva which I would attend along with Jannet Rivero for both of us it was our first time attending the session. The days spent there were in constant communication with the Cuban Democratic Directorate in compiling all the information as the crackdown continued and doing our best to obtain the most complete list available of the activists that had been detained.

The show trials began and the harsh sentences pronounced against these activists that Amnesty International would designate prisoners of conscience. Both of us would speak before the plenary session where representatives of the Cuban dictatorship were present along with the rest of the countries of the world and in three minute intervals denounce what was taking place on the island.

I still remember the shock on the faces of the regime’s “diplomats” when the news came of the executions of three young black Cubans at the hands of the dictatorship within hours of their arrest for hijacking a boat in an attempt to flee .

They couldn’t believe it, because despite the world’s attention being focused on the war in , the crackdown in was still in the news and the executions would catapult it even higher into the public consciousness. That is precisely what happened with many prominent international figures including many from the extreme left denouncing the crackdown and executions.Then like now there were a few that tried to defend the inexcusable.

Seven years later the Commission is no more, replaced by the United Nations Human Rights Council plagued with even more problems than the old Commission. The international climate is even more hostile to human rights than in 2003. Sadly, a majority of the 75 arrested in 2003 continue to be unjustly imprisoned prisoners of conscience. That is without mentioning the other 225 political prisoners, many imprisoned prior to 2003. Orlando Zapata Tamayo was arrested during the March 2003 crackdown but was not put on trial (although held in prison) until May 2004. Amnesty International declared him a prisoner of conscience during his pre-trial detention in January of 2004 – ten months after his arrest after a thorough investigation of his case.

Seven years later on March 18 Ricardo González, Ángel Moya, Normando Hernández, Julio César Gálvez, Oscar Elías Biscet and Regis Iglesias were all engaged in a fast on March 18 as part of a rotating fast they’ve organized from the Combinado de Este prison that began on March 12 and concludes on March 31st. In their communiqué they stated one of their objectives:

“We propose to proclaim the 18th of March as the National Day of Fasting for Freedeom of all captives for Motives of Politics and Conscience, for the end to the discord among Cubans, and the beginning of reconciliation and peaceful changes to democracy that the country needs.”

The activists also issued an open invitation and a call to action for: “All men and women of good will, who want to join us with their fasts, prayers or other supportive initiatives in this spirit of fraternity and solidarity, can join. United in this act of FAITH.”In that spirit I fasted for 24 hours in solidarity with ’s prisoners of conscience on March 18, 2010 and attended the Assembly of the Resistance vigil that same evening.

I thought of these men unjustly imprisoned for seven years separated from their families, tortured both physically and psychologically for engaging in actions that in any normal country are considered the exercise of their basic rights. It fills me with outrage and frustration thay encourages me to take sustained action on their behalf.

When I read their document ’s Vindication: The time for change is now! I read the following words and realized that we must follow their lead. Here’s part of what they said:

“We demand the immediate cessation of the cruel and inhuman treatment against the loving and peaceful Ladies in White. We proclaim the feasibility of peaceful change towards freedom and democracy in our country.”

Civic non-violent struggle as exercised by Orlando Zapata Tamayo, the Ladies in White and these prisoners of conscience are all powerful demonstrations of both the power and feasibility of democratic change being driven by non-violence.

The dictatorship now destroying came to power through violence and political terror planting bombs in movie theatres and hijacking planes. At the time they justified these horrors because there was another dictator in power who had destroyed Cuban democracy, and many accepted this reasoning. It is an old argument: the ends justify the means. The trouble is that the seeds of the horror to come were sown in that struggle. The terrorism was there even before they obtained power. Mohandas Gandhi was right when he said: the means are the ends.

Yesterday night I visited Miguel Sigler Amaya’s home where a number of Ladies in White had gathered to hold a literary tea and communicate with their counterparts in Havana who had just concluded the fourth day of marching through the streets of Cuba calling for their family members’ freedom. Listening to the Ladies in White in Cuba describe their march through the streets of Cuba and their aspirations for freedom filled me with hope for the future.