Today marks one month since Juan Wilfredo Soto Garcia died three days after being assaulted by agents of Cuban State Security. 12 former prisoners of conscience have petitioned the Cuban government to allow a neutral international investigation of the death. Currently another Cuban activist is on a hunger and thirst strike calling for an investigation and an end to the violence against dissidents. Below is an Amnesty International call to action for health care professionals that requests appeals be sent before July 6. 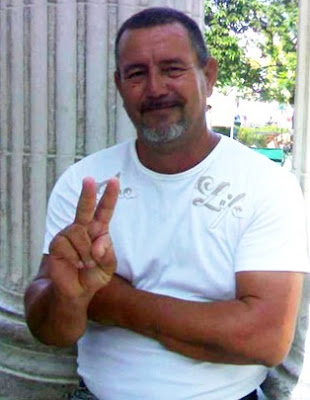 Amnesty International is seriously concerned over the death of Juan Wilfredo Soto García, who died in hospital on 8 May 2011 in the Cuban city of Santa Clara, three days after he was reportedly beaten during his arrest by police officers in a public park.

Juan Wilfredo Soto García, 46, belonged to the unrecognized opposition organization Foro Antitotalitario Unido, (United Anti-totalitarian Forum) and he had previously been imprisoned for 12 years for his political activities. According to testimonies gathered by Amnesty International, on Thursday 5 May 2011 at approximately 9am, two national police officers reportedly approached Soto García in Leoncio Vidal Park, asked him for his ID and then asked him to leave the park. After refusing to comply and protesting verbally against the expulsion, he was allegedly cuffed with his hands behind his back then beaten with batons.

Juan Wilfredo Soto García was arrested and detained at a police station, then hospitalised later that day. He was released from hospital the same afternoon only to return the following day, complaining of severe back pain. He was then admitted to the Intensive Care Unit and died in the early hours of Sunday morning, 8 May.

A local source told Amnesty International that, by chance, he met Soto García as he was going to the hospital on 5 May. According to the source, Soto García said “I just got a beating in the park with batons and I’ve got a very sore back. These people killed me.” Hospital sources have reportedly stated he died from acute pancreatitis, a condition which can be triggered by abdominal trauma and commonly causes severe back pain. Juan Wilfredo Soto García is known to have had several pre-existing medical conditions, including gout, hypertension, diabetes and cardiovascular problems and it is unclear whether his death was directly linked to beatings sustained while in police custody.

Amnesty International has received contradictory information regarding the incidents that led to Juan Wilfredo Soto García’s death and therefore is calling for a thorough investigation to determine what happened to him in the park, at the police station, and at the hospital.

Amnesty International is calling on the Cuban authorities to account for the death of Juan Wilfredo Soto García and to investigate the role of police officers during this detention in Leoncio Vidal Park.

If you receive no reply within six weeks of sending your letter, please send a follow-up letter seeking a response. Please send copies of any letters you receive to the International Secretariat, attention of THE Health Team, 1 Easton Street, London WC1X 0DW or e-mail: health@amnesty.org