A Reflection on Violence & Non-Violence: In a Better World

It is my firm conviction that nothing enduring can be built on violence. - Mohandas Gandhi 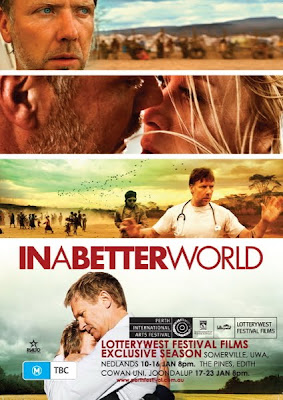 Tonight I saw the Danish film In a Better World directed and written by Susanne Bier at the Bill Cosford Cinema at the University of Miami. It won the 2011 Oscar for Best Foreign Film. It is a profound meditation on the role of violence and nonviolence in an imperfect world.

The Miami International Film Festival honored Susannne Bier on March 6, 2011 with a special Career Achievement Tribute at the Gusman Center for the Performing Arts then screened the film IN A BETTER WORLD (HÆVEN). Unfortunately, I was unable to see it at the time but a person knowledgeable about film, Ernesto Rodriguez, did and insisted that as someone interested in nonviolence that I had to see the film. How right he was.

Susanne Bier, in the video above, discusses the illusion of safety and explores its fragility in the film. She also explores the unexpected consequences of violent action and the power of nonviolent resistance.

In addition there are no squeaky clean characters but a "hero" who is a human being with flaws and regrets but trying to do better. It is playing now in Miami, Florida for only a few days. Don't miss it and tell your friends to go see it as well.

In a Better World is playing on Sunday, June 12, 2011 at the following locations:

June 17 update: The film is now only showing at the Tower Theater in the South Florida area.
Posted by John Suarez at 11:58 PM

Email ThisBlogThis!Share to TwitterShare to FacebookShare to Pinterest
Labels: film, In a Better World, Nonviolence, violence